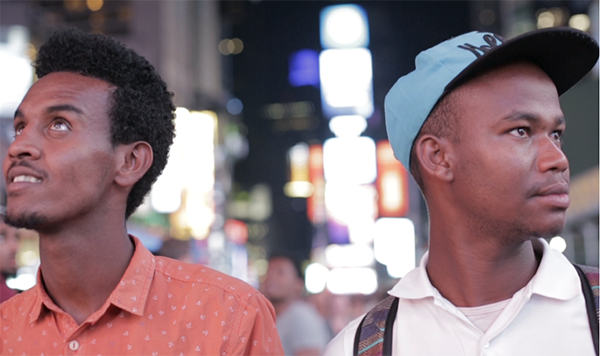 A few decades ago, three covert operations airlifted more than 20,000 Ethiopians to Israel to escape hardship and danger.

More fraught with controversy is the struggle of the final community of Ethiopian Jews to immigrate. Had conversion a few generations back been done under duress? Did they always consider themselves Jews, as Jewish activist groups do? What is the position of the Israeli government? What happens to the thousands waiting to leave?

“The Passengers,” a feature documentary, relates the story of that final community. It follows two best friends representing a grassroots advocacy campaign to win American-Jewish support to their cause. The film, by Ryan Porush, is one of those featured in the next iteration of the Edward S. Finkelstein Jewish Film Festival, according to Julie Sherman, festival chair.

“Despite so many of the Jews in Ethiopia having to wait for several years, there remains hope—both for those who have made it, that their family and friends would join them, and also for those that are still stuck as ‘passengers’ in Ethiopia,” Porush said. “My sense is that this is an issue of politics and agenda-setting. Israel has a wonderful progressive history on the issue of Ethiopian Jewish immigration, and should be celebrated for that. [But] I think, as Jews, it’s also our responsibility to hold Israel to this high standard that it set for itself in terms of the lengths we will go to bring Jews home.”

The documentary is a part of the 11-film series, streamed virtually from mid-February to late March. Originally, it was set to run in the spring.

“But we decided to move our May festival up when we realized that this season, like the last, would have to be a fully virtual event,” Sherman said. “It seemed more fun to give our audience something to do, and to look forward to, in the coming cold, dark days.”

Films related to Israel inhabit a large part of the film festival repertory, in which the Holocaust is also a recurrent theme. In the fictional “Thou Shalt Not Hate,” a young doctor and survivor’s son must decide whether or not to treat a critically injured man with a swastika tattooed on his chest. His decision changes the physician’s life in unexpected ways.

“Love It Was Not” reveals an astonishing two-year love affair between a Jewish inmate at Auschwitz and one of her Nazi guards. Despite his brutality in other ways, Franz Wunsch is seen as sincerely loving Helena Citronova and saving her life. The affair ends when he is sent to the front, though he searches for her after the war. The next time they meet is 30 years later, when she testifies at his war crimes trial.

“This is an absolutely true story,” said Sherman. “Both the woman and the man involved were interviewed years later, as were a number of fellow Auschwitz inmates who witnessed the relationship throughout.”

There is also more lighthearted fare. “Herb Alpert” is a documentary about the legendary musician and music producer many don’t realize is Jewish. “Here We Are,” an Israeli dramedy, concerns a man who gave up his life for his autistic son, now a young adult.

“It’s a lovely road trip/buddy film, but ultimately a story about growing up and letting go,” Sherman said.

Another Israel-based documentary, “Double Income, Kids,” concerns a gay couple who engage an American surrogate to bear their twins.

“Neither gestational surrogacy or adoption are accessible for [gay couples] in Israel,” said director Hendrik Schaefer.

In addition to wanting to explore whether “gestational surrogacy is a viable and ethical path to parenthood,” Schaefer was struck by the fact that, in Israel, a country with a very high fertility rate, the desire of gay people to have children is also very high. Politics aside, the film is a personal one about a loving couple.

“The mission of the Edward S. Finkelstein Jewish Film Festival is to enrich the cultural life of the greater Harrisburg area by presenting films that reflect contemporary and historic Jewish and Israeli experiences,” Sherman said.

The Edward S. Finkelstein Jewish Film Festival runs from Feb. 14 to March 23. Individual tickets and all-access passes are available for purchase now on the festival’s website, www.hbgjff.com. Each of the 11 films will be available to stream for 72 hours, with a new film offered each Sunday and Wednesday throughout the series. Some films will be accompanied by guest speaker events that are included in the ticket price. For more information, visit the festival website.

Log On, Tune In
In addition to those mentioned in the main story, other films in this festival include:

“Aulcie,” a documentary about an African-American basketball player who found fame and fortune in Israel but whose personal demons nearly destroyed him.

“Golden Voice,” an Israeli dramedy that highlights the “stranger in a strange land” plight of many new immigrants

“Love in Suspenders,” a lighthearted Israeli comedy about second chances for love.

“Winter Journey.” In his last role, Bruno Ganz portrays an elderly German Jew interviewed by his son about his activities during World War II, before fleeing to the United States.