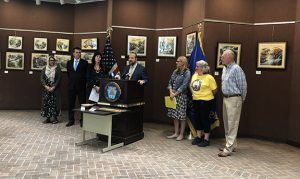 A colorful Harrisburg event is headed back to the Susquehanna shoreline this weekend.

Harrisburg’s 54th annual Artsfest will return to Riverfront Park from May 28 to 30 with vendors, music and food. This is the first time since 2019 that the event will be held in Riverfront Park, having moved to City Island last year due to the pandemic.

“It is going to be bigger and better than ever,” said Harrisburg’s Director of Communications Matthew Maisel at a press conference on Wednesday.

The event will feature 150 artisan vendors, 50 performing acts, 25 food trucks and a special “Kidsfest” for children.

The festival will showcase art from across the country such as pottery and ceramics, paintings and drawings, digital art, jewelry, apparel, photography, printmaking, woodworking and more. The HBG Flea will also be onsite selling locally made items from nearly 50 vendors.

Artsfest is occurring simultaneously with the Art Association of Harrisburg’s 140th anniversary. In celebration, the musical group, the Wednesday Club, will hold a piano and vocal concert at the association’s N. Front Street building. The Art Association will also begin its 94th Annual International Juried Exhibition on May 28.

The Susquehanna Art Museum will also be present at the festival. They will show art in their 30-foot “VanGo! Museum on Wheels” where festival attendees can view a portable art museum.

Renewal by Andersen will sponsor the “Kidsfest,” where kids can get their faces painted, learn about animals and insects, enjoy a performance by the Popcorn Hat Players and make their own canvas paintings. “Kidsfest” will also feature a circus activity where kids can do activities such as walk a mini tightrope and learn how to juggle.

New to this year’s festival is a community glass mural, in which event attendees will be able to create their own glass tile to add to a larger community mural. The mural will be completed by students in grades 4 through 9 who will attend the Capital Area Intermediate Unit (CAIU)’s summer residency program at John Harris High School at the end of June. The mural will then be displayed at the school.

Maisel said that the purpose of the mural is to drive home the theme of “community.” He hopes to have visitors from the surrounding areas come to the festival and not just Harrisburg residents.

Art can also be experienced outside of Riverfront Park. Visit Hershey & Harrisburg recently launched an audio-guided, mobile tour of the city’s murals. “Murals and More- A Walk of Art” takes visitors down two suggested paths with various murals and 14 check-in spots. After stopping at all 14, participants can win postcards with a picture of the murals on the front.

If attendees get hungry, some 25 food trucks will be on site with items such as crab cakes, cheesesteaks and Farm Show milkshakes for artists and art lovers alike. There will also be a beer and wine garden.

Festival attendees can park on City Island for $5 and at the Market Square Garage for $10 from 8 a.m. to 9 p.m. courtesy of Park Harrisburg. Street parking is free on May 29 and 30 and after 5 p.m. on May 28 Downtown. Drivers can get four hours of free parking in downtown Harrisburg by using the code LUVHBG in the Parkmobile app. Handicapped parking will be available on State Street near Front Street.

N. Front Street, from Forster to Walnut streets, will be closed to vehicle traffic from 9 a.m. on May 27 until midnight on May 30.

For more information on Harrisburg’s Artsfest, visit their website.