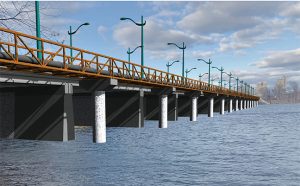 PennDOT’s rendering of the Market Street Bridge, with the proposed utility bridge alongside it.

How can one agency have so many bad ideas?

A few years ago, the PA Department of Transportation proposed doubling the width of I-83 through Harrisburg, destroying yet more of the city, 1950s-style. That proposal was later slimmed down, slightly, to no one’s satisfaction.

Then there’s the tolling of the South Bridge, a proposal now temporarily halted by the Commonwealth Court following near-universal condemnation by local and county governments.

And I’ve certainly slammed PennDOT enough times in this space for refusing to slim down the lower portion of Forster Street, which is dangerously overbuilt.

Well, now, we have a scheme to build a hideous utility bridge next to the historic, majestic Market Street Bridge.

Last January, PennDOT held a public meeting to present proposals for the Market Street Bridge rehabilitation. Three options were offered, none of which included the unsightly utility bridge.

Evidently, that got dreamed up sometime between then and now, foisted upon us with no warning. PennDOT’s reasoning: it will cut the bridge rehab project from an estimated 10 years to five to six years.

I’m all for reducing the timeframe, since I’d like to see the project completed during my lifetime.

However, it seems uniquely shortsighted to mar a historic bridge—for decades, a century, more—in order to save a few years on the front end. And, besides, aren’t there any better options?

Perhaps the utilities now beneath the Market Street Bridge sidewalk could be re-located to the nearby CAT Bridge, which is slated to become a pedestrian/bike bridge.

These are just a few quick ideas, some of which were suggested by our thoughtful readers. I’m sure there are other better, more creative and perhaps more cost-effective options than building an entirely new, horribly ugly utility bridge running the length of the stately Market Street Bridge.

PennDOT will take public comments on its current proposal, which it calls “modified option 1,” through June 17. My comment is—let’s go back to the drawing board.