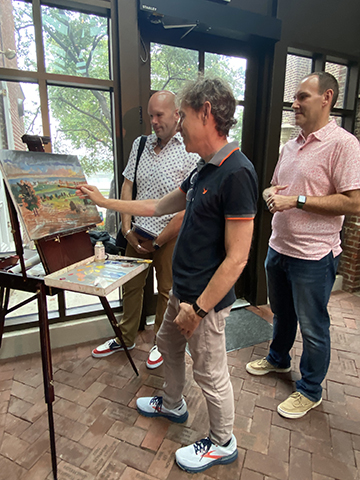 After an exhilarating and, at times, exhausting five hours out on the town downtown, Midtown and all around yesterday for Gallery Walk, the 34th edition is “the talk.” My partner remarked it was the best kind of an art hangover she had experienced.

The Silver Screen brought some of Tinsel Town to the Burg with the Art Association of Harrisburg (AAH) saluting Hollywood in grand style. Hats off to Carrie Wissler-Thomas, CEO and Rachel O’Connor, curator and, as Ed Sullivan would say, “It was a really big show.” The weather did not dampen any spirits, only adding an air of intrigue to the day.

For two of the prizewinners at the AAH member’s show, the first name needed to be Jeff. Jeff Bye took “Best of Show” award with his grand scale oil painting, “Everett Theater.” His work demonstrated his love for abandoned old movie houses—this one in decay from Boston. Haunting and dreamlike, its memories linger from the past. Jeff Wiles took first place in photography with a nostalgic nod to the drive-ins of yesteryear in his black and white study, “Last Picture Show,” artfully staged and shot for all time. The art hangover was helped along by the Gallery Walk impromptu after-party at the Millworks, where many of the artists congregated at the bar. Zack Rudy and Brooke De Marco of Huckle Buckle Boys held court regaling us with a “Tale of Two Cities”—Philadelphia the night before with a story you could not make up and now back in Harrisburg and so glad to be home. Reina “R76” Wooden did a live demonstration outside the Millworks restaurant doors and made it a point to direct the artists to the bar, including Paul Zemaitis of Moonrise Candle Company, who shared, “Foot traffic was steady all day long for Gallery Walk.” Rebecca Adey of Mod Sew Designs paved her way with a big smile and dog tales to melt your heart. Larry Washington, Jr, photographer at large, arrived after getting some great photos at the AAH early in the day. Jonathan Frazier dropped by after his painting demonstration at St. Stephen’s Riverfront Gallery. Larry traded camera tips and quips with Jonathan as the two weighed in on angles and apertures. PD Murray and Tina Barrier share a Zen-like bond with camaraderie to spare. This dynamic duo will be joined by Tami Bitner for the new show featured on the lobby wall opening this Friday for 3rd in the Burg. Closing out the first hour with a sou’con of devil-may-care bravado, PD imposed on the chef for soup of all things, for which I will be eternally grateful. Thank you, Mr. Murray. Bon vivants out and about added to the ambiance of “Bohemian rhapsody,” reaching a swell of laughter and frivolity. And to all the art-lovers who toured the museums, murals, churches, galleries and restaurants yesterday, you are all winners. In the G.B. Stuart Gallery, friendship and painting go hand-in-hand as female artists and age-old compatriots Peg Belcastro and Gail Walden Coleman express different perspectives in the exhibit “Heartscapes and Landscapes.” In her own words, Walden Coleman “follows her heart’s feelings” in her intuitive works reflective of her emotional barometer. Belcastro’s love of lush surroundings one may find in a forest is deeply infused with a painterly point of view, capturing “the landscape with bold exciting colors.” A study in contrast demonstrates once again that opposites attract. Gail’s paintings’ abstractness juxtapose precisely with Belcastro’s panoramic vistas grounded in realism. Instead of creating a dissonance as one might expect, they draw the viewers into two separate worlds—one with open-ended possibilities, the other taken at face value liberally sprinkled with imagination and color. Together or apart, each allows for introspection and reflection. “You’ve got a friend in me…” and them too!

You know you are of a certain age when your doctor recommends a diet high in fiber. So, we were elated to learn of CALC’s newest show, opening Friday, Sept. 23—“(un)Common Threads,” featuring fiber art in all its glory, in the Upstairs Gallery. This will be a contrast and a complement to “Heartscapes and Landscapes” downstairs. Curator “Dr.” Cathy Stone, my new art dietician, has assembled a gallery of textile technicians, highly skilled artisans so adroit at their craft that “magician” might be a more apt description. Weavers, dreamers and practitioners of tradition, transcending timeless tactile interest, bring it full circle to a contemporary cache perfect for the stage of tomorrow. Stone’s coterie of juried artists run the gamut from eco-dying, tapestry weaving, knitting, embroidery, felting, saori weaving and lace-making amongst paper and paint and found materials. All told, 31 pieces made the cut, a mere 40% of the entries submitted. There is no one better qualified to juror those select works than guest artist and felting facilitator par excellence, Erma Yost, a Carlisle resident of renown.

Outstanding examples from East Coast artisans include quilting in its many forms. Holly Cole’s layered organza organdy and cotton fabric are dye-painted, hand-embroidered, drawn and free motion quilted. Meghan Udell employed hand-knitted “Morse code” in her unique manner. Other quilt Quixotes include Linda Syverson and Liz Danish. From central Pennsylvania, Carol Reed, CALC instructor, fiber artist and land art enthusiast, specializes in fiber-mixed natural dyeing. In addition, the only wearable art was created by Jana MacGinnes with a flower fusion tunic via roses adorning the neckline and an encased hem with twisted fabric, much like trailing vines entwining romance and fiber as one, like a garden sonnet that captures beauty’s fleeting fancy. When viewed as a whole, this 30-plus-one collection weaves a dream of aesthetic acclaim where art meets craft in a hushed atmosphere. Listen closely as the works whisper to you.

It took me 50 years to turn 100 in my writing career, starting with Harrisburg Independent Press back in 1972. Never thought I would see 100…not years mind you. But this blog denotes my century mark-plus of art columns for TheBurg, including “The Painted Word” and “Bob’s Art Blog.” After my first 3rd in the Burg coverage on Charlie Feathers’ show at H*MAC back on St. Patrick’s Day of 2019, I thought, what comes next? In those early days, I had to check in with my editor, Lawrance Binda, regarding topics before I headed out on assignment. Long story short—TheBurg was recently honored for “Distinguished Service to the Arts” for the region for 2022. We were humbled to be included that night at Whitaker Center to see Lawrance and the staff of TheBurg—Lauren Maurer, Kelsey Tatge and art director Megan Caruso–feted by Theatre Harrisburg actors. Here’s to turning 100!

dIf you like what we do, please support our work. Become a Friend of TheBurg!