May signifies several arrivals, from May Day to the flowers that bloom to my birthday and, just days later, 3rd in the Burg. This May’s edition speaks to longevity, too. Not me at 71 years old, but the Art Association of Harrisburg’s 94th Juried International Art Show with its opening reception on Friday night from 5 to 8 p.m. 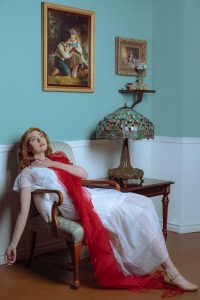 After 90-plus years of this global show, the AAH has it down to a science. Curator Rachel O’Connor and CEO Carrie Wissler-Thomas promise a stellar cast of artists and art from near and far. The gallery will be chock full, covering every medium imaginable. Juried selections are being finalized with submissions aplenty. Ms. O’Connor captured one under serious consideration for a preview glimpse.

Carlisle photographer extraordinaire, Nicole Dube, created a digital photograph that is thought provoking and haunting with a nod to portraiture of the past. Dube’s staging was potent enough to capture the second-place award in photography for this prestigious show. Her focus is a lovely female figure in repose, slouched down in a chair that alludes to an air of mystery shrouding the scene. The color photograph, entitled “La Petite Mort,” only widens the divide as open-ended and with inconclusive evidence in view.

Better call Poirot. Festivities for Friday night feature artist/musician Jonathan Frazier, laying down music perfect for the season. Guest juror is Nadiah Rivera Fellah, curator at the Cleveland Museum of Art. Exhibit sponsors are Traci Meloni and David Volkman. The show runs from May 20 to July 7. 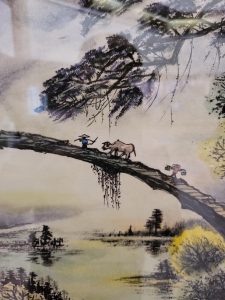 At what age does possessing artistic talent begin and creativity start? In all likelihood, in the womb, as mankind is genetically wired at birth. That predisposition takes root when mentored by parents, teachers and even friends of a like mind. 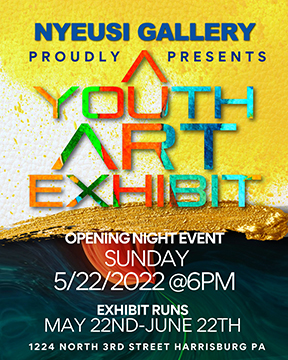 Nyeusi Gallery in Midtown is giving children, ages 5 and up, their own exclusive exhibit to show their art, with an opening reception on Sunday, May 22, at 6 p.m. Before the gallery opened its doors last September, one of its foundational cornerstones was built around community involvement beyond the Midtown corridor where Nyeusi is located at 1224 N. 3rd St. This latest exhibit will add one more dimension to that promise. After all, the future lies in the hands of our youth, both intellectually and creatively.

In addition to youth art, Michelle holds regular chess club sessions for kids while her partner keeps the intellect sharpened by featuring trivia podcasts imparting wisdom for all ages. Both invite young and old alike to this first annual “Youth Art Exhibit” this Sunday evening. Bring the kids and grandkids to open up a world of possibilities. After all, there is no age limit when it comes to art. The exhibit runs May 22 to June 22.

A thank-you event recently took place at the Carlisle Arts Learning Center (CALC) on Cinco de Mayo, the art haven hosting a party for M&T Bank’s salute to nonprofits in the area. Setting the stage is a crucial part of the puzzle for any event, requiring an artistic ambience that sets the bar high. No one does it better than the ladies at CALC. This party was spearheaded by Maureen Madio, who paid great attention to the smallest details. 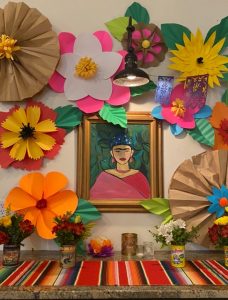 Entering the upstairs gallery at CALC, guests were transported to Mexico’s land of enchantment with handmade paper flowers forming a garden of gorgeous grandeur. Making Madio’s May flowers even prettier than the real deal was no easy feat, but she topped that off by mixing a medley of margaritas, made memorable by their colorful array. She was assisted by Cathy Stone, curator, Becky Richeson, executive director, and Lauren Aungst, ceramic studio coordinator, as well as Savannah Manetta, art instructor at CALC and the AAH.

The party was a hit by all standards. The fete thanked the nonprofits of Carlisle and featured an impassioned speech by Morgan Rector, vice president of M&T Bank, who eloquently paid tribute to the tireless board members and staff who often operate behind the scenes. These nonprofits are agents of change, making the Carlisle community a noteworthy contributor to a better way of life in central PA. The longstanding partnership, with CALC hosting this annual event, is underwritten by M&T Bank in recognition of nonprofits’ achievements and services.