When the curtain goes up, we have come to realize life is not a dress rehearsal. We present a different face to the world each day after the makeup is applied and the “costume” is assumed, for the part we play is but a fleeting moment.

Thus spoke the omniscient narrator in the voiceover for the production, “Dramatis Personae,” a one-woman show photographed, mounted and directed by Carlisle photographer Nicole Dube. For this behind-the-scenes look at the duality within us all, Dube mined the psychological theory of Erving Goffman’s dramaturgy. The theory regards the schism of the private face and the one that is presented to the world being radically different. “Dramatis Personae,” the Latin phrase translates to “reveal,” we are all “persons of the play.” 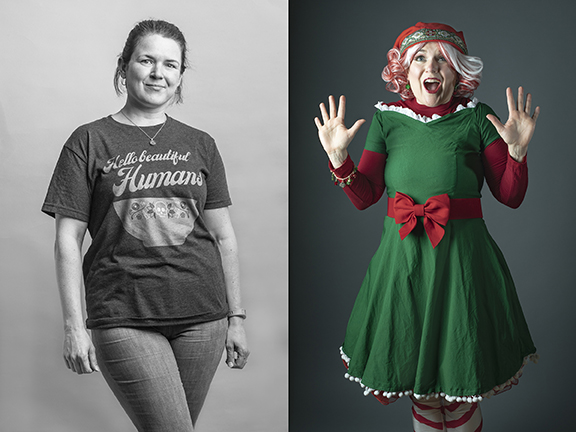 A diptych from Nicole Dube’s “Dramatis Personae” (and below)

Nicole’s influence for “Dramatis” was Annie Leibovitz’s “Showgirls,” featuring portraits of Las Vegas showgirls, behind the scenes, in and out of costume. The dramatic difference sans makeup was truly revealing. Dube shared that the most challenging aspect of her project “was rounding up the players to participate in the photographic journey.”

Over the course of six months, she put out a call for participants through Instagram, word-of-mouth and collaborators used in the past. In the end, 45 “hearty” answered, from heroes to villains, mermaids to monsters, royalty to re-enactors and drag queens to Disney characters. The gallery/art center doubled as a studio at times, and Dube “developed” a give-and -take relationship with the “sitters” before, during and after their photo shoots. 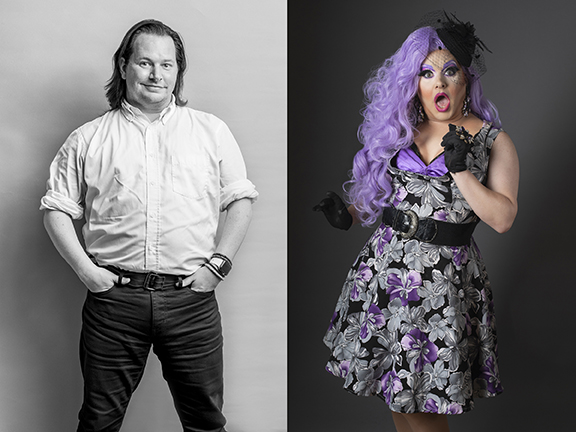 The takeaway, a commonality shared by most, was a certain level of discomfort and apprehension in the “before” shot. But once “in costume,” they came to life in their choice of characterization, fully embracing their stage persona. At the heart of it all, Dube chips away at the notion of the male gaze versus the female gaze as historically women have been viewed as objects and not as people. In sharp contrast, the “after” portrays the identity of the face one hopes to project on the stage as they imagine their adoptive roles. The artist/photographer shared that her favorite part of the project lay in the twilight moments “capturing the vulnerability, the insecurity and the glimpse into the psyches of the sitters” as they laid bare their souls. Truth be told, we are all sitters before and after. Presented in diptych format, the “before” picture is in black and white while the “after” is in color. In sharp contrast, the “after” reveals the inner self-identity, ready for the stage called life. The final presentation was a collaborative effort between Nicole and CALC curator, Cathy Stone. 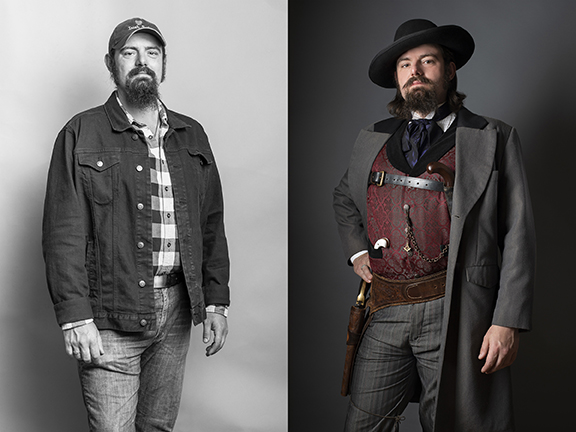 Perhaps Shakespeare wrote it best, “All the world’s a stage, and all the men and women merely players. They have their exits and their entrances. And one man in his time, plays many parts.” (“As You Like It,” Act II, scene 7.) And as for the director, Nicole Dube, it is time to take a bow.

Act II: The Further Adventures of Peabody and Sherman in the Plein Air

Peabody and Sherman here in the “Wayback Machine” (aka WABAC):

“Mr. Peabody, what are the hats the people are wearing, and what are in the little suitcases?”

“Sherman, those black little felt hats are called berets, and those little suitcases are referred to as a pochode box, better known as a portable easel to paint in the plein air. In case you haven’t guessed by now, Sherman, we are in Paris at the beginning of the Barbizon School in 1830. Plein air painting became the rage to capture beauty as it truly is—landscapes like never seen before, so close you can touch nature in the great outdoors.” 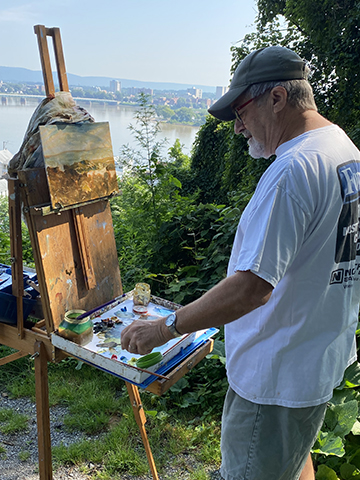 Paul Flury at his easel in Negley Park

Borrowing a page from history, almost 200 years ago, we find ourselves surrounded by a coterie of painters with easels a-right at work in the open air, capturing modern life. The Barbizon School advanced the notion that natural light is the best light to paint in—it allowed the artist to capture the emotional and sensory dimensions of a particular landscape at a particular moment in time. The portability of plein air painting emerged to become a revolutionary step forward in art. The Impressionist painters by the 1870s put their own stamp on it as plein air demonstrated a group committed to the craft of painting outdoors, no matter the obstacles. This movement of painting spread from Europe to the United States, with salons springing up in Cos Cob in Connecticut and even Taos in New Mexico.

Now Sherman, press the forward button on the WABAC, and set the year to 2021 as we are headed to Negley Park in Lemoyne. Arriving on July 24, a Saturday morning, Sherman asked Mr. Peabody, “Why here?” Sherman, if you use your powers of observation at the scene playing out before our eyes, you will find the answer to your question and more. That auspicious morning at Negley Park revealed a small group of artists with easels popped and poised to paint secluded in a perfect pocket of poetic charm facing the Susquehanna River. The artists assembled joined instructor Paul Flury, leading the class for this plein air exercise in capturing the scene before them, which evolved over the course of three hours. 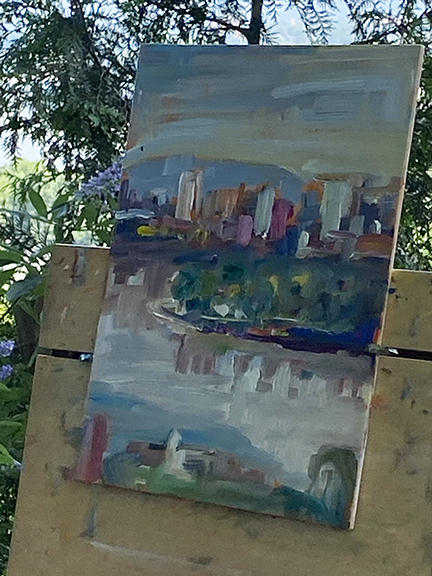 This proved to be a regular occurrence as this small enclave meets twice a month, weather permitting, with locales changing on a regular basis. Paul collected this band of merry painters for their take on the west side of the river’s vista. He started out at the Art Association of Harrisburg 10 years ago when he instructed the “Landscape Plein Air” class. “To study the environment around you in real time to apply what one sees in nature” forms the basis of this style of painting, he shared.

Judging by the landscapes that evolved over the course of those few hours until the clock struck noon, theirs was a painterly persuasion that had been at their craft for some time. A true passion came through in the work, mostly untitled at that point, in the process as some varied from the rough-sketched stage to an in-focus dramatic study of the view in living color.

Kelly Charlesworth’s oil-on-panel painting, well underway, was titled on the spot by her own admission, “Morning at Negley Park.” Ann Bayne, an artist from Camp Hill, shared her rendition, “Glitzy Morning,” as the day, especially in those morning hours, was brilliant with sun shining through the trees. Both Cheryl Peters, whose work was in acrylic, and Lina Ferrara’s oil painting were untitled at that juncture. Instructor Flury’s painting was also in an unnamed state. All five artists viewed the same scene, yet their paintings were beautifully unique in their interpretive representation.

Sherman, I need you to hit the dial one last time to August 1970 as Quiksilver Messenger Service is telling us to “Have Another Hit of Fresh Air” in the morning.” Breathe deep.

To reach Paul Flury, email him at pwflury01@gmail.com.