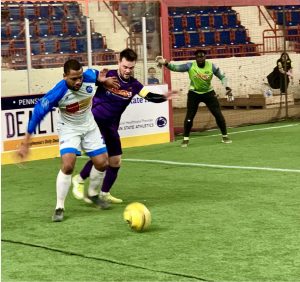 This is not a story about Christian Pulisic, the Hershey native who became the first American-born man to play in and win a Champions League final game, which his team Chelsea won, 1-0, over Manchester City last May.

It is a story, though, about blazing the trail that gives central Pennsylvania claim to Pulisic, who is arguably the best player from the United States.

The 23-year-old American soccer phenom’s dad, Mark Pulisic, was a player for the Harrisburg Heat in the 1990s. Rather than pack it up and move on when his playing career ended, Mark stuck around with his family, coaching at Lebanon Valley College and club programs in the area.

Many of the standout players who moved to Harrisburg to play professional indoor soccer stayed. In so doing, they created interest in the sport and, through their coaching, changed the soccer landscape in our area.

This season, the team celebrates 30 years. The anniversary game on Feb. 26 will feature special uniforms and an alumni match. Before that, on Jan. 22, the Heat will add players to the Hall of Fame, along with team founder Dr. Rex Herbert and the late ABC27 sports reporter Gregg Mace, who covered the team.

The new season opened last month in Utica. Home games have moved from the older, cavernous Large Arena at the Farm Show Complex to the newer, more intimate Equine Arena.

The Heat played at the Farm Show in the ’90s, too. Joining Mark Pulisic on the early Heat teams were Richard Chinapoo, Bill Becher, Gino DiFlorio, John Abe, Bob Lilley—all guys who stuck around and continued to coach locally. Central Pennsylvania is now rich with soccer clubs thanks to the professional ranks that have passed through, starting with the Hershey Impact (1988-1991, indoor), the Harrisburg Heat (1991-2003, indoor), the Hershey Wildcats (1997-2001, outdoor), later the Harrisburg City Islanders (2004-2017, outdoor), and again today, the Heat.

Current Heat team captain, Danny DiPrima, grew up in Dillsburg watching these legends before he went on to play college soccer at North Carolina State.

“Indoor was like the thing,” DiPrima said. “Back in the ’90s when I was growing up, my dream was always to be a professional soccer player and luckily, I’m able to live that out. It all started with the Heat. Seeing them play, but also having them in the community, was really cool.”

Heat President Kevin Healey said that having some of the sports stars living in the community helps in both the short- and long-term.

“Our strategy is to bring in good soccer players and to win a championship,” he said. “They are good people. They go out and spread the word in the community by marketing it by showing them the attributes they have.”

The Heat were three games short of a possible playoff berth with a 13-8 record after their last game pre-COVID on March 11, 2020, beating Utica, 5-3. In the 22 months since, some players on the roster returned home, but most stayed local, including a wealth of international talent from England, France, Brazil and Mexico.

“To be able to play and coach and make my living through soccer—it’s a grind, but I wouldn’t give it up,” DiPrima said.

“You can have a good player on the field, but you have to have a foundation of guys who are here year-round to ultimately make it work,” said third-year coach and general manager Pat Healey, who played professionally for the Baltimore Blast.

Maryland soccer enthusiast Carl Delmont, founder and CEO of Freedmont Mortgage and owner/coach of the Baltimore Celtic youth soccer club, bought the Heat in 2016. It had struggled since its resurrection in 2012, operating on a shoestring budget with players who were mostly local, practicing just once a week, late at night.

Today, the team practices almost daily during the season. They hope to return to pre-COVID days soon, going to area schools to teach skills, speak out against bullying and drugs, stress the importance of healthy diets and exercise, and tell their stories. The players host clinics year-round for area youth. The team recently formed a partnership with Central Penn College.

“It is the toughest job I have held, but seeing young kids and families interact with our players and cheer loudly at our games is very rewarding,” Delmont said. “Watching local players like Danny [DiPrima] and Brad [Kerstetter]—both had season tickets as kids—play in front of their families and inspire the next generation to follow their passion, is simply amazing.”

The team is gearing up for the season premiere with some new faces on the roster. Others, including Will Eskay, Marcel Berry and Pat Thompson, were lost to free agency. Tavoy Morgan was traded. Dylan Hundelt retired.

Two former Heat players are re-signed: Stephen Basso (defender of the year in 2016-17) and Brad Kerstetter, another defender. The team also picked up a Rochester veteran, Michael Cunningham, a forward from England. New, young faces include James Vaughn, a defender/midfielder from England, Yuri Farkas, a forward from Brazil, and Richard John from Trinidad and Tobago.

“We hope to compete for a championship this year, but we know we will continue to build young talent and do well in the league,” Kevin Healey said.

The MASL is not the Champions League, but it is an incubator. Only time will tell what the next iteration will bring.

The Harrisburg Heat play 12 home games and 12 away games this season, which runs through April 3. For more information on the team and schedule, visit the website at www.harrisburgheat.com.