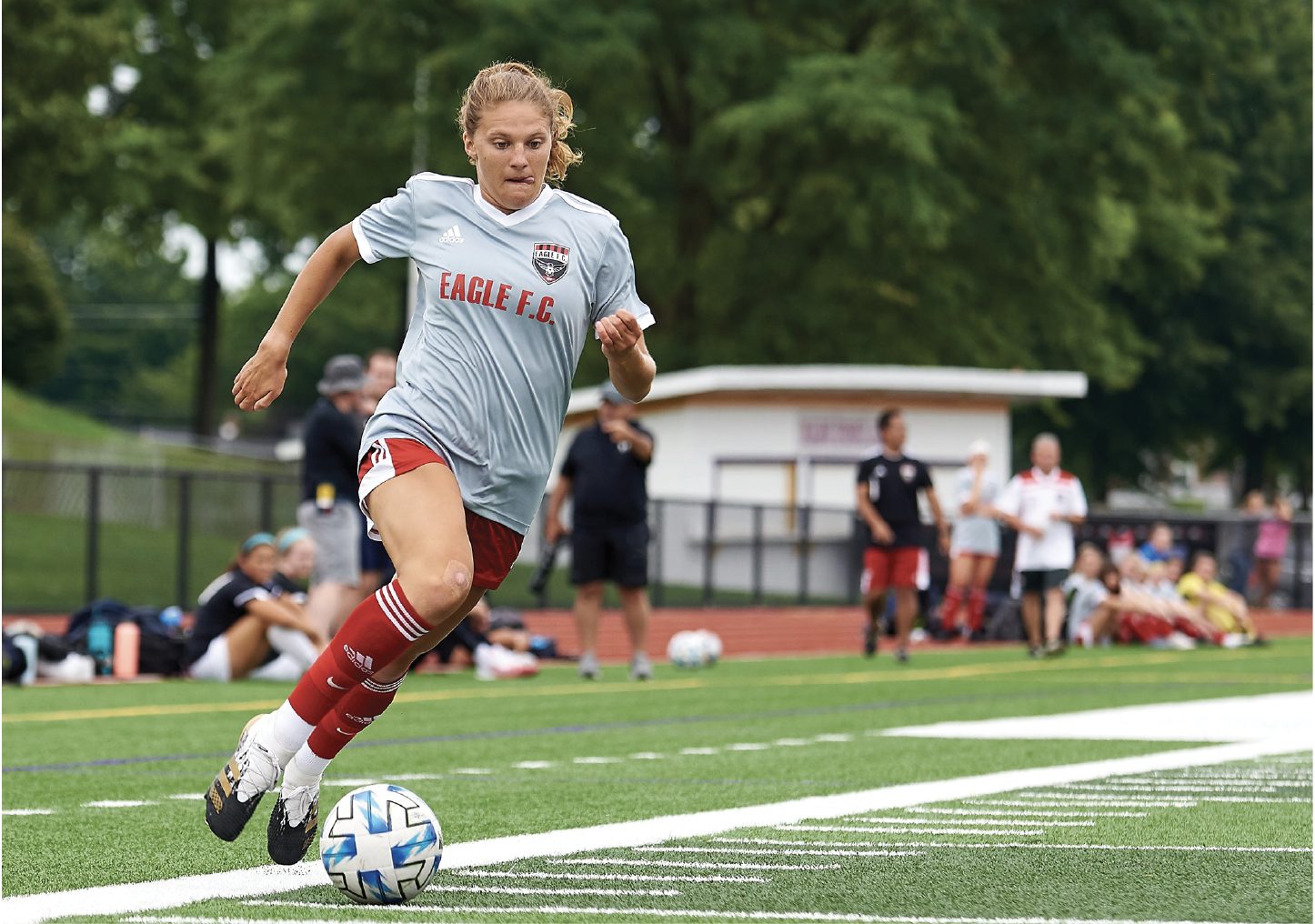 Lexi Johnson is known for being vocal on the soccer field.

“As a defender, I have a view of the whole field, so I’m always trying to direct the play,” said Johnson, of Harrisburg. “I’ve been described as a leader—I can be loud.”

Now, she has a new reason to be vocal. She sees the opportunity of a lifetime on the field—the chance to play in this summer’s inaugural season of a new national women’s soccer league, on the only team representing Pennsylvania, comprised of the capital region’s best homegrown players.

Eagle F.C., based in Mechanicsburg, is one of 44 U.S. semi-professional teams formed under the United Soccer League’s new women’s league, called the USL W, launching this month.

“Being on this team and having the opportunity to possibly move forward into a professional role—it’s the opportunity to keep dreaming,” said Johnson, a Central Dauphin High School soccer standout who’s wrapping up her junior year at the University of Pittsburgh at Johnstown.

The league is designed as a bridge between college and professional soccer, building on the wave of women’s soccer growth launched by the U.S. Women’s National Team’s success—and tapping into a deep talent pool of American soccer players.

“A lot of girls growing up would like to dream about professional soccer—and they do. But then they get older and realize there’s not much opportunity,” said Hannah Young, a midfielder named to Eagle F.C.’s inaugural roster. “But now this league will inspire little kids to keep dreaming and not give up. A huge thing in life and sport is belief.”

Young is grateful for the chance to play for Eagle F.C., calling it “exactly what I need,” following a college soccer career plagued by injuries. She’s set to graduate from the University of Nebraska this month and return to her hometown of Enola, where she’s the all-time leading goal scorer and overall points leader in East Pennsboro High School history.

Altogether, the roster of 28 women is either already living in the Harrisburg area, coming home from college for the summer, or returning home to launch careers, all drawn by the chance to continue playing the game they love.

“I think central Pennsylvania has one of the most talented player pools in the region,” said Toan Ngo, Eagle F.C.’s USL W’s head coach. “All the players have been successful here at the high school level, with multiple Mid-Penn Central All-Stars, high school record holders. They’ve not only been successful here in their hometown, but they’ve gone off to play at high-level DI, DII and DIII [college] programs.”

“Central Pennsylvania lost something when we lost the City Islanders,” Ngo said. “The USL as a league has been around many years, and has been very successful on the men’s side—the Harrisburg City Islanders played in the USL. So [forming this team] was an opportunity we couldn’t pass up.”

For the soccer-uninitiated, it’s known as “the beautiful game” for good reason.

“It’s a lot of thinking as a coach and as a player, because it’s basically a chess match,” Ngo said. “You tactically prepare your team, are constantly thinking about what changes you can make, if any, to get that advantage. It’s 11 players on each team trying to get the ball into the net.”

It’s as much a mental battle as it is a physical one, and his fulltime job likely gives Ngo the mental edge. He’s a civil servant for the Department of the Navy as a data engineer, focused on analytics and solutions.

“My analytics background carries over—I’m doing the same thing as a coach,” Ngo said. “Analytics are a big part of game. They show strengths and deficiencies.”

Eagle F.C.’s season kicks off this month, May 21, on the road. Harrisburg-area fans have the first chance to attend a home game on Memorial Day weekend, Friday night, May 27 at Boiling Springs High School’s turf field—the summer season’s home field. Tickets are $5.

“This area has a huge passion for soccer,” Ngo said, “So, we want folks to come fill the stadium. We have 1,000-plus seating capacity, so be loud, be proud, and support this group of women. Chant, sing, bring out drums—make it an amazing atmosphere.”

While setting the scene, Ngo also sets a high bar of expectation for this trailblazing team.

“I think we’re going to be very competitive, if not challenge for the [Mid-Atlantic] division title,” Ngo said. “We have a core 28 players that are ready to get the job done. Our goal is to win the division and then see how far we can go nationally. I believe we have the ability to bring a national title to central Pennsylvania.”

But there are even more goals in his sights.

“The USL Super League is being formed in August 2023, which then would feed into the [professional] National Women’s Soccer League (NWSL),” Ngo said. “We want to get an invitation to play in the Super League [as a professional team]. We’re hoping to be as successful as the City Islanders one day.”

“It’s enough to cover my gas money,” Ngo said with a laugh. “For me, it’s about instilling my passion for the game, to be able to bring this back to the community, to give back to these players—especially those I’ve coached before. To watch them go from U8 to college and be successful—no amount of money could pay for that.”

It’s easy to interpret the league’s hashtag, #FortheW, as “for the win,” but it’s also “for the women.” The USL W League’s mission is “to use women’s soccer as a force for societal good by creating a national platform to increase opportunity, gender equity and career development.”

“I think the U.S., in particular, struggles with having women in leadership, in sports. Right now, comparably, there are so many less women than men involved in sports. So, this is a great opportunity to bring more women’s sports out in the world,” said Meg Tate of Carlisle and Dickinson College, a midfielder/forward named to Eagle F.C.’s squad.

Tate wants to utilize another pipeline formed by the new league—the training and development of women’s soccer coaches, to further grow the sport.

The new league’s impact is designed to ripple through the generations.

“I hope we can set the precedent for the women’s teams that will be coming after us, who will want to strive to be better than us,” said Johnson, “and that it will keep building and spreading and getting better.”

For more information on Eagle F.C, including the team schedule, see www.eagle-fc.com/usl-women. And to hear more of head coach Toan Ngo’s story, tune into TheBurg Podcast’s May show, which will be available on Friday, May 13.