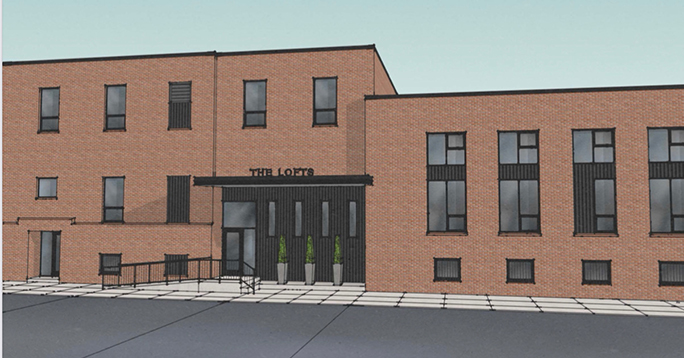 A rendering of “The Lofts in Midtown”

Several development projects in Harrisburg received their final city approvals on Tuesday, allowing them to begin.

During a virtual legislative session, Harrisburg City Council approved the land development plan for conversion of the former Salvation Army building in Midtown to a 16-unit, market-rate apartment building.

The project, by Wormleysburg-based Integrated Development Partners, will convert the 10,920-square-foot building at Green and Cumberland streets to one- and two-bedroom units. A paved lot across the street will provide parking for the project.

“The project does have ample parking,” said council member Dave Madsen. “There will be 16 apartments total and about 35 parking spaces for those units.”

The project, called the Lofts in Midtown, previously had cleared both the city Planning Commission and Zoning Hearing Board.

Council member Danielle Bowers was the sole vote against the project, objecting to the fact that all units would be market-rate. In April, the city approved a package of bills to incentivize the construction of affordable housing in Harrisburg.

“The applicant has no interest in participating in the city’s affordable housing program,” she said.

City Solicitor Neil Grover added that the project began the city application process before those ordinances were passed, which typically would exempt it from legislation approved later.

The building, built in 1954, has been empty since late 2019, when the Salvation Army relocated to its current location on the 500-block of S. 29th Street.

The project is part of the South Allison Hill Safety Plan, a partnership between several nonprofit organizations that aim to make the neighborhood safer.

Gary Lenker of Tri-County said previously that he hopes to break ground on the project late this summer.

In addition, council unanimously approved the transition of Monroe Street, between Verbeke and Herr streets, from a two-way street to one-way. This was done at the request of the Harrisburg School District, which hopes to improve the flow of traffic in the area of the Downey School.

Harrisburg has received a $700,000 grant from the state Department of Community and Economic Development for the project, which would extend the existing Urban Meadow walkway on Boyd Street from Fulton to N. 6th streets, near where the federal courthouse is being built. The project also would add 50 angled parking spaces on Reily Street between Logan and Fulton streets.