‘Tis the season—not only of holiday joy, but for college applications, admissions and acceptances.

And Rahina is a Harrisburg teen who just received the news of a lifetime.

She was admitted to the college of her choice—the University of Pennsylvania—but the news gets even better: She was granted a full scholarship, “a full ride” to the prestigious Ivy League school.

And her success gets even sweeter.

She was able to share her news from the stage Tuesday, before hundreds of Harrisburg-area business leaders gathered to celebrate Big Brothers Big Sisters Capital Region’s (BBBSCR) 40th anniversary.

Collective gasps, smiles, applause and even a few tears, rippled through those in attendance—especially when she gave full credit to her BBBSCR mentor.

“I have the best mentor ever—thank you Stacy and Beyond School Walls,” Rahina said. (The last names of youth participants in BBBSCR programs are not disclosed.)

Beyond School Walls is a BBBSCR initiative that pairs middle and high school youth with workplace mentors at Harrisburg-area businesses. It’s just one of many programs flourishing under the nonprofit’s umbrella and highlighted in Tuesday’s anniversary celebration held at Camp Hill’s Penn Harris Hotel.

“Every one of you is here because of a connection,” said Amy Rote, BBBSCR president and CEO, as she addressed attendees ranging from teens—“little brothers and sisters”—to community leaders serving as “big brothers and sisters,” board members and corporate sponsors. The nonprofit BBBSCR’s mission is to “create and support one-to-one mentoring relationships that ignite the power and promise of youth” over a five-county area—Dauphin, Cumberland, Lancaster, Lebanon and Perry.

Dayna Smedley was seated around a full table of Deloitte’s Mechanicsburg employees involved in BBBSCR.

“I grew up in a household with a single mother, so for me, it’s very important to connect students with mentors to help guide them … it’s very helpful to their future,” Smedley said.

Additional community sponsors in attendance included Capital Blue Cross, The GIANT Company and Mid Penn Bank, among many others.

Throughout the celebration, “bigs” and “littles” took to the stage to share their stories, memories and testimonials. One of the highlights was the story of “big brother” Dylan Gallucci of Mechanicsburg, and his “little,” Josh, now 21.

“I have seen Josh’s ideas and interests evolve,” Gallucci said, reflecting on their 10-year relationship. “Coming into his life when he was 11 or 12 changed his vision for where his life was going.”

Through a taped video interview, Josh explained the impact Dylan and BBBSCR had on his life.

“Not having a father figure, I had challenges growing up, including feelings of abandonment,” said Josh. “I was a little bad ass kid. I feel like I would have been in jail had I not found Dylan—I would be dead probably.” 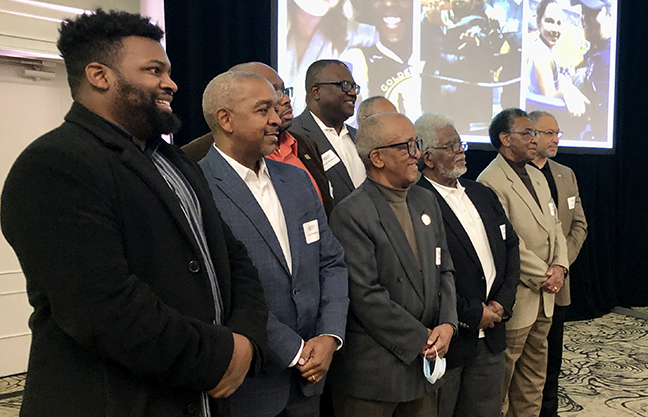 One attendee who has seen the nonprofit’s growth first-hand over the full range of its 40 years is Monica Gould of Mechanicsburg.

“I was a college student at Dickinson when I was first matched with a little … that was 1981 … the year the organization was founded,” said Gould, who went on to serve BBBSCR as a board member and develop its strategic plan—something that’s in her wheelhouse as founder and president of the Mechanicsburg-based firm, Strategic Consulting Partners.

Among all the success stories, the mentorships and matches, the programs and initiatives, BBBSCR board chair Eric Kiehl honed in on the underlying reason for the organization’s longevity.

“I’m dedicated to this organization,” said Kiehl, “because it makes such a difference in our lives.”