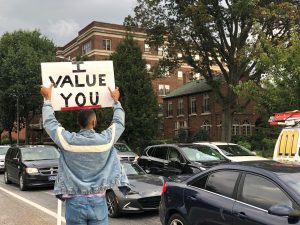 It’s been two weeks since Jordan Dandy began standing on the corner of Front and Forster streets with a message of positivity.

Now, his appearance has become a regular sight, helping to cheer up hazy-eyed commuters during their routine morning drives.

Each morning, he stands at the side of the busy road and holds a sign reading “I value you” on one side and “You’re so important” on the other.

“I care about people a lot,” Dandy said. “I feel like my purpose on earth is to love in a way that is tangible and people can feel valued. I want people to have some sort of light in the midst of literally parts of our country on fire.”

A little over two weeks ago, Dandy was in the hospital with a serious infection. During that time, he found out his hero, actor Chadwick Boseman, died.

This, combined with everything else going on in the country, had Dandy feeling down.

After listening to a speech by Boseman on finding your purpose, Dandy came up with the idea to make the sign.

“I want to give people hope,” he said. “I’m not just going to give up on this year. I’m going to make this year good.”

When Dandy first started going out each morning, people were confused, he said. Some tried to give him money. One man asked if he was hitchhiking, and others stopped to ask why he was there.

Eventually, he started recognizing people. He waved to kids on the school bus and shouted, “Have a nice day!” to commuters. Dandy said that one woman even wrote him a card saying how she had just moved to the city and seeing him every day made the move easier. 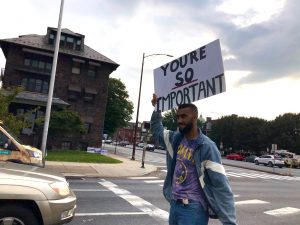 He said that he chose the words for his sign very carefully. He didn’t want his message to be political.

“I think it’s good to have your opinions and to have a strong belief, but, if at the end of the day that leaves you hating your neighbor, I don’t think that’s good,” he said. “I want the best for someone else, no matter what their stance is politically.”

Dandy and his brother Cory Dandy make up the indie-pop band Dandy. They performed virtually at Harrisburg’s July Fourth and Kipona Festivals.

Even as the band is hard at work making music, Dandy said that he plans to continue going out with his sign through the end of September, at least.

Occasionally his friend Bobby Bohr joins him with a sign saying “I care about you” and “You’re worthy of love.”

While Dandy’s message is for the people driving by, he said the experience has given him hope, as well.

Although not everyone has the guts to stand on the street with a sign, Dandy said it’s the simple things that make a difference. He encouraged people to say thank you to their mail carrier and trash collector or be intentional about showing kindness to a stranger.

“People want to feel appreciated and valued,” he said. “Just be sincere in simple acts of kindness.”