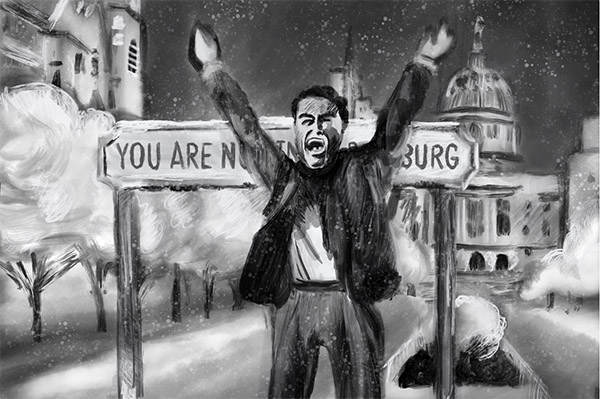 Since it’s December, I’m going seasonal this month, citing a scene from a film that you’re almost certain to stumble upon this holiday time.

In “It’s a Wonderful Life,” the evil Mr. Potter calls the movie’s troubled hero, George Bailey, into his office to offer him a job. Before doing so, they have a brief conversation about what happened to their town, Bedford Falls, during the recently concluded Great Depression.

“You saved the Building and Loan,” Potter tells him. “I saved all the rest.”

Responds Baily, “Yes, well, most people say you stole all the rest.”

In Harrisburg, thank goodness, we don’t have a Mr. Potter, a man who used the misery of the Depression as an opportunity to enrich himself, scooping up his town’s valuable assets for pennies on the dollar from desperate sellers. But we do have plenty of George Baileys.

What do I mean by that?

In “It’s a Wonderful Life,” Bailey is hyper-focused on one thing—steering his small business through the Depression, doing everything possible to survive. As I walk around Harrisburg, I see the same thing here, now.

It’s been eight, nine months since the pandemic hit, causing almost universal business closures, followed by uncertain re-openings. Most small business people have been hit and hit hard. To them, 2020 is a lost year, but you know what—they’re mostly still here, and they’re determined to make it to the other side of this nightmare.

Many have gotten creative simply to stay in business so they can pay the bills until better times return.

Home 231 extended into an adjoining parking lot, first setting out tables, then tents, then heaters. They even added a mural. Many other restaurants have done similar things, turning to outside dining and, as summer wound down, deploying the heat lamps.

Midtown Cinema began offering a catalog of movies to stream. Once their already-planned renovation was finished, they cautiously re-opened to small groups to ensure adequate distancing.

Gamut Theatre Group shut down for six months and, upon their return, had imposed strict masking, sanitizing and distancing requirements, among other precautions. Unfortunately, the resurgent pandemic forced them to close again, though they hope to reopen as soon as possible.

Radish & Rye turned to all-virtual ordering, spending gobs of time and money to establish a robust and reliable e-commerce system, until they feel confident enough to open their own brick-and-mortar store following their years in the Broad Street Market.

Those are just a few of many examples.

Here at TheBurg, we consider ourselves to be in “survival mode,” as well. We launched our membership program, Friends of TheBurg, early specifically to help us grind through the pandemic. To date, more than 300 members have joined, and we are eternally grateful.

As I write this column, it seems that we’re headed for a difficult winter. Cold weather has descended, and, just as predicted months ago, COVID-19 cases have spiked to new heights. What will we George Baileys do?

Like our fictional hero, we will continue to persevere. Small businesses that have made it this far are a committed bunch and often are well run, to boot. The city’s die-hard small business owners do not scare off easily and, I’m certain, will do everything possible to survive until the cloud lifts.

Right now, there is a general expectation that 2021 will be better, presuming that one or more vaccines are approved and distributed. The optimistic take is that life will slowly grind back to normal as the year progresses—and business owners are nothing if not optimists.

In the meantime, I can only continue to urge one thing to our readers—please robustly patronize local businesses this holiday season. For many small businesses, particularly retailers, holiday sales make up half or more of their annual revenue.

So, strap on the old mask and visit “the shop around the corner” (another, more obscure holiday-themed Jimmy Stewart flick). Or visit their online stores or pick up the phone and call them. Then, after this is all over, you can honestly, proudly say that you, the people of greater Harrisburg, “saved all the rest.”