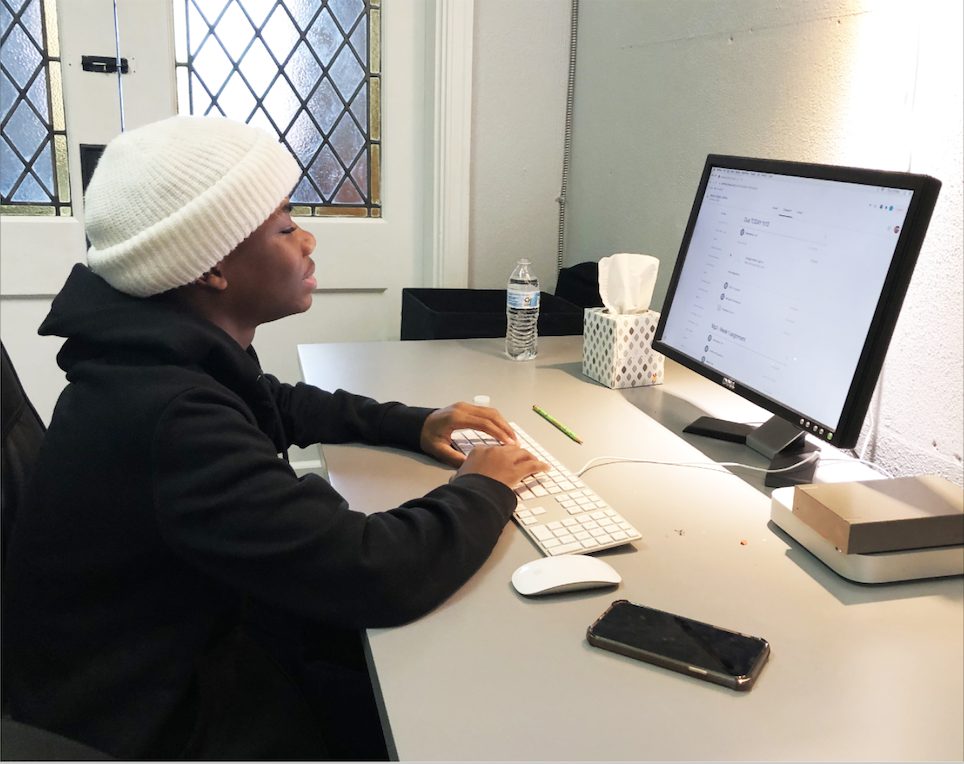 Nazier Taylor was always goofing off in school, self-admittedly.

He liked to “mess with” his friends and teachers. As a teenaged boy, he enjoys having a little fun. Nonetheless, he did well in his classes, he said.

When the Harrisburg School District made the switch to online learning, Nazier was happy. He got to stay home and sleep a little later. But it didn’t take long before things started going downhill.

“I always did good in school,” he said. “I hate computers now.”

At home, Nazier couldn’t focus. He would fall asleep, he said, unless he was looking at his phone. One of the biggest challenges for him was that he couldn’t keep up with his teachers. They went too fast, he said, and his mom was unable to help him.

“I was going to fail,” Nazier said.

It was his first year in high school, and he was lost.

The experience with online education has been vastly different from student to student and family to family in the school district. A few are doing well in their new environment, while others are struggling.

In August, the district decided on a 100% virtual start to the academic year. Students could either attend the new Harrisburg Virtual Learning Academy (HVLA) and commit to online learning long-term or follow the “Pathway to Classroom Instruction,” with the hope of eventually returning to brick-and-mortar learning. Acting Superintendent Chris Celmer said that about 285 students enrolled in HVLA.

However, the options aren’t looking too different today, as benchmarks that the district set in order to bring students back to the classroom haven’t been met.

In order to re-open, the district requires a three-week period of sustained COVID-19 positivity rates from 3 to 4% and incidence rates per 100,000 people below a rate of 50 in Dauphin County. There also must be a decrease in community spread of the virus.

As of this writing, these benchmarks have been met. In fact, pandemic trends have been growing steadily worse since September.

“I don’t know when kids will be back,” Chief Academic Officer Susan Sneath said. “We are trying to make the most of the situation. Nobody knows the exact right thing to do here.”

It’s a complex and difficult decision that all school districts have had to make—in-person or online? But every student seems to experience the situation a little differently.

During the pandemic, Nicole Smith, a fourth-grade teacher at Scott Elementary School, has been adjusting to online instruction. It has taken innovation, she said, coming up with songs and activities to engage students through a computer screen.

But it’s still not easy.

Smith has called on students before to answer a question, only to see their screen freeze mid-response.

“How much is that kid receiving from me, if it’s not working on their end?” Smith wondered.

She explained that one of the biggest issues with online schooling in Harrisburg is internet access. Many families, she said, have multiple students sharing a Wi-Fi router, slowing down the system.

When students were in school, the district had an average of one device for every five students. Now, each student needs their own device. Additionally, the district developed a program to provide free internet to students. Even with these extra measures, the district is at about 87% average daily attendance.

“We have to assume that’s 87% with secure internet,” Sneath said. “It’s a challenge.”

“The kids are home all day, every day,” said Angela Hodges, a mother of two Harrisburg students. “We are paying twice the amount we would normally pay for utility costs.”

Angela and her husband Maurice said that the extra expenses have been difficult to bear. However, they are happy to have their kids home and appreciate the district’s attempt to keep them safe.

Smith said that other barriers to effective learning are the responsibilities and distractions that many students have at home. She recalled a student who had to hold her little sibling on her lap during a class session.

“You have to be understanding of those types of circumstances,” she said.

For Nazier, getting out of his house and having a quiet place to do work has been a lifesaver.

Every Thursday night, he goes to Center for Champions, a mentorship program in Allison Hill. When the staff found out Nazier was struggling with school, they offered a desk in their office for him to work during his classes from 8:30 a.m. to 2:30 p.m. They hope to be able to do that for more students.

Ever since, Nazier has been doing better.

Phylicia Carter’s son Josiah struggled in his special education classes in the school district. He was behind where he should’ve been academically for his grade level. When the district decided to go online, Carter moved Josiah to Commonwealth Charter Academy.

While still holding her full-time job, Carter has had to help her son catch up to the sixth-grade level he is in.

“The adjustment is very difficult,” she said. “I feel like I’m in class because they are asking me to do so much. But I’m glad I made the decision I made.”

According to Celmer, about 187 students moved to charter schools between March 13 and Aug. 31, due to the pandemic. He said that the district will be reaching out to those students to encourage them to return. Harrisburg’s virtual platform is expanding, and Celmer thinks students will want to come back.

Some students that stuck with the district are doing well in the virtual world.

Siblings Maurice Jr. and Mayah Hodges said that their grades have improved while learning online.

It was a hard adjustment at first, especially for Mayah who missed her friends. But, overall, they’ve had a positive experience and have felt supported by their teachers.

Sneath said that, for most students, grades have stayed relatively stable. She hasn’t seen an “overabundance of failures” or numbers that look much different from last year.

Smith said that the virtual platform has actually allowed her to connect better one-on-one with her fourth-grade students.

She said that students can privately message their teacher if they have a question, and a teacher can do the same if a student isn’t engaged with the lesson.

Although Nazier still hates going to school on a computer, he said that his teachers have been helpful.

“School is never going to be the same again after this,” Sneath said. “So, when students do come back, how can we keep the good parts from this?”

For more information on the Harrisburg School District, visit www.hbgsd.k12.pa.us.

To learn more about Center for Champions or to volunteer, visit www.centerforchampions.org.