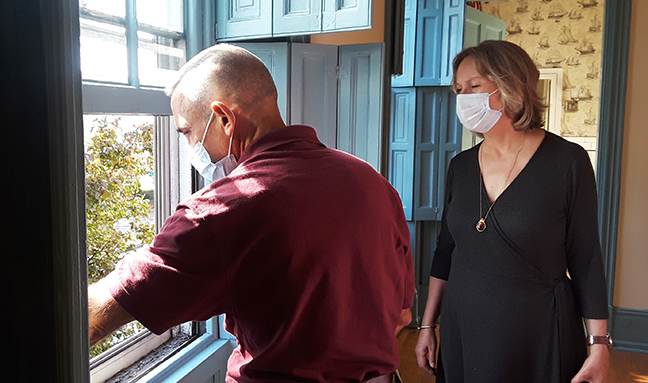 John Lindtner raised the question: Does it make sense to replace a window that has survived 200 years with one that might last 30?

“They say, in my world, that the greenest window is the window that’s already built,” he said as he diagnosed the health of a 200-year-old window. “It doesn’t make sense to fill up the landfill with these windows.”

The window restoration expert did, though, have a word about the storm windows that appeared to be approaching the half-century mark. 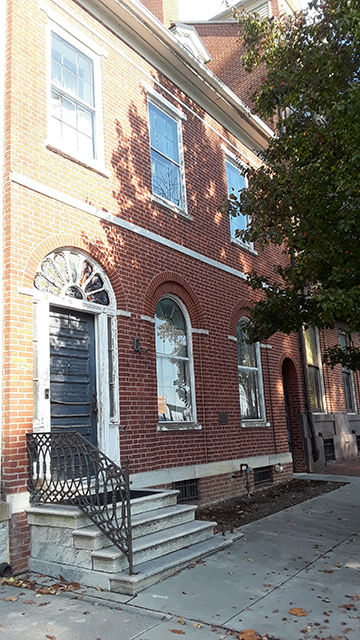 Lindtner was inside the library of the Haldeman Haly House (pictured), the Governor’s Row home called by architectural historian Ken Frew one of Harrisburg’s top-five most historic buildings.

Lindtner’s visit on Wednesday was a “house call” sponsored by Historic Harrisburg Association, funded with a gift from the Auchincloss Family Fund. He was there to advise Dauphin County Library System on the feasibility of restoring the windows of the circa-1812 home that the library acquired in 2019 to expand its programming, community, and administrative space.

The 5,458-square-foot house at 27 N. Front Street was built by Stephen Hills, architect of the first Pennsylvania State Capitol, and was home to Sara Haldeman Haly, whose bequest in 1896 seeded the Dauphin County Library System. The library system is running a capital campaign to raise $3.5 million to renovate and link the building to its McCormick Riverfront branch next door–the original branch built on the site of Sara Haldeman Haly’s garden.

“This building came to us like manna from heaven in a lot of ways because not only is this, obviously, right next to our library, but there’s a really important shared history here,” said Dauphin County Library System Executive Director Karen Cullings.

The Haldeman Haly House’s soaring, arched front windows face the Susquehanna River, Market Street Bridge and City Island. The north-facing side windows overlook the library roof, buildings along and behind Walnut Street, and–peeking above it all–the dome of the state’s 1906 Capitol, the second replacement of Hills’ creation, burned in an 1897 fire.

“There’s absolutely nothing wrong with this window,” he said. “There’s just a lot of paint on it from close to 200 years.”

With weather stripping and good storm windows, which can be custom-made to fit unique shapes such as the Haldeman Haly House’s arches, a restored window can achieve respectable energy efficiency, he said.

Historic windows endure because they were built with old-growth timber, he added. “To replace these windows would be very much a mortal sin.”

The library has been advised to cover the windows for the winter, said Cullings. Lindtner concurred–with one caveat. Don’t seal too tightly.

“You want to have some opportunity for it to vent in the event it gets wet,” he said. “If it gets wet and can’t dry out, you’re creating a bigger headache.”

When panes need to be replaced, the “wavy glass” of the handmade age can be replaced with salvaged historic glass or even glass new-made with characteristically wavy touches. As Lindtner and Cullings investigated a top-floor room under the home’s dormered windows, Lindtner decided not to try to open one that housed a wasp nest.

“See what you inherited?” he asked Cullings.

Cullings declared the building in “not that bad” shape, in need of cosmetic work but otherwise stable. She promised to “make it beautiful again,” like the historic library next door. Restoring the windows suits that theme.

“We definitely want to be able to preserve as much of it as we can,” she said. “Obviously, we have to deal with budgets, and we’re a nonprofit, but we’re hoping we’ll be able to preserve all of it, if we can. I like to feel like I’m honoring the heritage of it. I don’t want to be doing things to it that are going to make it look asymmetric and out of whack with what the original designers had in mind.”

The Harrisburg Architectural Review Board will Zoom-meet at 6 p.m. Nov. 2 to consider the library’s request to remove some non-original additions and build a connector between the Haldeman Haly House and the McCormick Riverfront branch library.