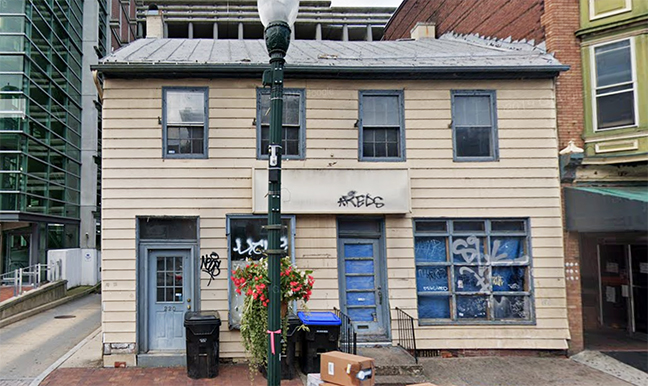 For a second straight year, Balsley House tops the list of threatened historic properties in Harrisburg, according to the city’s principal preservation organization.

Balsley House, a pre-Civil War double building, is on the list as it’s in danger of “demolition by neglect,” according to HHA.

The 2,590-square-foot building, located downtown at 220 N. 2nd St., also was HHA’s top preservation priority last year. Despite the designation, little seems to have been done to stabilize or restore the deteriorating structure.

David Morrison, HHA’s executive director, expressed encouragement on Monday, saying that, since last year, he has been in contact with the building’s owner, Dusan Bratic of Mechanicsburg.

“Since it went on the list last year, we’ve had a couple of conversations with the owner,” Morrison said. “I think we might be able to take this in a positive direction.”

Balsley House has housed many different businesses over its long lifetime, but has sat empty and increasingly blighted for many years.

Balsley House has actually been on the list since 2018. Beidleman House has been on since 2011, William Penn since 2017, and the former state hospital since 2014. The Prospect Hill Cemetery Gatehouse went on the list last year after a car hit the structure, severely damaging it.

William Penn has been on the sales market for many years. However, the owner, the Harrisburg School District, recently indicated that it may decide to retain and renovate the building.

HHA also listed two “preservation successes” of the past year: Grace United Methodist Church, a downtown church that has revived its congregation, and Derry Street United Methodist, an Allison Hill church that was sold and now houses the Anglican Church of the Pentecost.

Moreover, HHA put about 30 structures in and around Harrisburg on its “watch list,” meaning that they’re historic properties of concern. These range widely, but include such landmark buildings as the Broad Street Market, the former Coca-Cola bottling works on Allison Hill, the Riverside firehouse and even HHA’s own Historic Harrisburg Resource Center.

“We want to keep these on our radar screen,” Morrison said. “This way, people can help us keep track of them.”

Morrison noted one pending success. The commonwealth-owned Dixon University Center in Uptown Harrisburg is on HHA’s 2022 “watch list.” The Jewish Federation of Greater Harrisburg recently put the site under contract for purchase, with plans eventually to move its operations to the sprawling property.

“That will be to us the great success of the decade, if not the millennium,” Morrison said.

HHA’s board is expected to approve the Preservation Priority list at its February meeting.