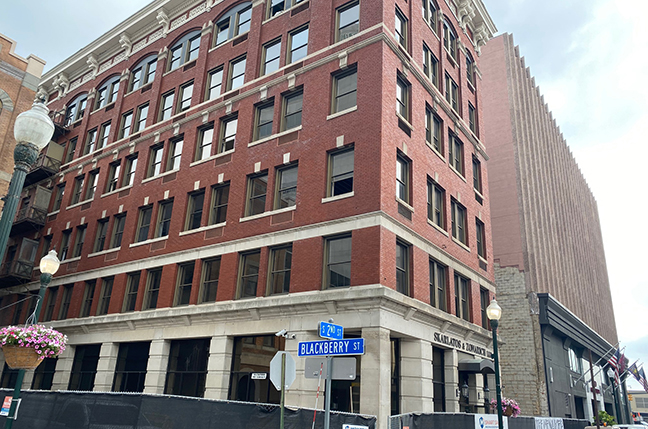 Before a group of stakeholders, CEO Brad Jones said that interior construction was set to begin on the one- and two-bedroom units in the former home of the Skarlatos Zonarich law firm, which has relocated to Strawberry Square.

He also explained that the project, dubbed the Menaker Apartments in honor of the building’s former moniker, had proved to be difficult to design, with plans changing numerous times for the renovation of the 33,809-square-foot building.

“There were a lot of different possibilities here for this site,” he said. “It ended up being one of the hardest projects we’ve ever worked with, but that’s why we’re celebrating here today.”

Harristown’s partners on the project include Select Capital Commercial and Linkbank. Camp Hill-based ByDesign Consultants is the architect, and Mechanicsburg-based Mowery Construction is the general contractor.

Harristown bought the century-old building in 2018, expecting to renovate it for commercial use. However, the plan evolved over time as other downtown projects showed that the market was stronger for residential than commercial space.

Jones said that he expects the apartment project, located at 17 S. 2nd St., to be completed in early 2022. 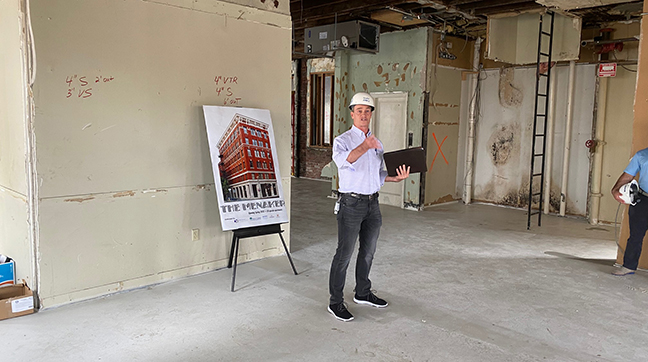 Harristown also owns the lot next door at 21 S. 2nd St., once the site of a three-story building that included the Coronet restaurant and that was heavily damaged by a fire decades ago. The company plans to build a new, six-story mixed-used building there with apartments, offices and retail space.

Harristown has yet another downtown project in the works. In May, the company received city approval to convert the eight-story, century-old commercial building at 112 Market St. into 35 one- and two-bedroom apartments.

“We have some spectacular views from this building,” Jones said, of the Menaker Apartments. “One of the reasons we wanted to have you up here is to see, from six floors up, how spectacular the city looks.”