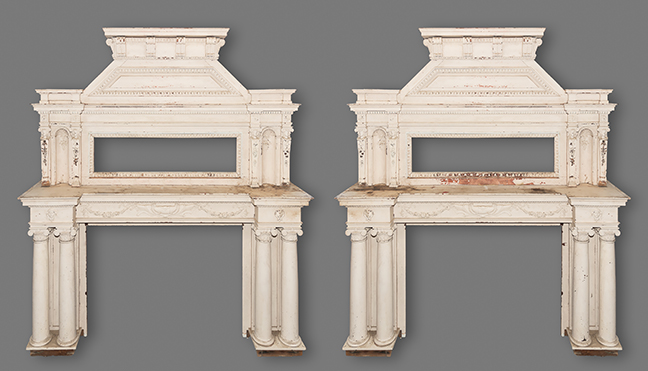 Twin fireplace surrounds from Harrisburg’s Senate Hotel, which will be auctioned later this month.

If you’d like to possess your own slice of Harrisburg history, now would be a great time to raise your number.

Cordier Auctions plans three virtual events this month for those who want to possess a piece of the olden days.

First, on Saturday and Sunday, the Harrisburg-based auction house will hold two auctions featuring hundreds of items from the estate of long-time Mayor Steve Reed, who died in January.

Those auctions contain more than 1,100 lots, many of them old west artifacts, such as saddles, statues and documents, along with a broad assortment of military and sports collectibles, among other items.

However, a number of Harrisburg-specific items also are featured, including a Harrisburg Patriots signed football from 1987, historic Harrisburg postcards and old Harrisburg prints and newspapers.

A screen shot of a few of the items up for bid on the first day of the Steve Reed estate auction.

Online viewing and pre-bidding is open now for the first day and the second day.

Then, on Nov. 21, Cordier will hold a “Fine and Decorative Arts” auction with more Harrisburg-related items up for sale.

At that auction, you’ll be able to bid on several large items from Harrisburg’s past, including a pair of fireplace surrounds from the second-floor private dining room of the Senate Hotel (pictured at top). These surrounds were donated to the Historic Harrisburg Association, where they were kept for many years. The nonprofit HHA will be the beneficiary of the proceeds from the sale.

A section of the mural from the State Theater

Two other local lots of note are the massive oil-on-canvas mural (130-feet long by 5-feet high) that decorated the interior of the State Theater, which closed in 1974, and a large still life painting by Severin Roesen, a 19th century, German-born artist who spent substantial time in Harrisburg.

That auction also features many other items not specifically tied to Harrisburg. Online viewing and pre-bidding begins Nov. 16.

To learn more about these auctions, visit the Cordier Auctions website.