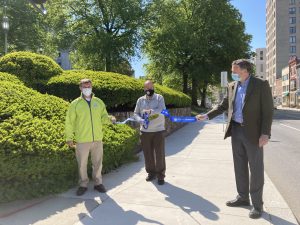 City officials cut the ribbon on the newly reconstructed sidewalk.

The circle is now complete, as Harrisburg has cut the ribbon on the final stretch of sidewalk expansion around the state Capitol.

“The old sidewalk was what they call an ankle buster,” Mayor Eric Papenfuse said.

About a decade ago, the state expanded the narrow strip of concrete that long surrounded much of the Capitol along Walnut and N. 3rd streets, constructing a full-sized walk. However, it left the job unfinished near the front of the building.

The newly reconstructed sidewalk extends the full-sized, 10-foot-wide walk from State Street to North Street, completing the loop around the building. The sidewalk expansion removed parking spaces along the street. However, that parking loss was made up last year, when the city built additional angled parking spaces and electric vehicle charging stations in front of the State Museum.

Across the street, at a bus stop near the intersection at North and 3rd streets, a bump out from the sidewalk also was added. City Engineer Wayne Martin said this will increase safety for riders by making it easier for them to board the bus. ADA-accessible ramps were added to the sidewalks, as well.

The state Department of General Services helped the city fund the sidewalk project.

“You’re going to see these types of improvements in every corridor of our city,” he said.

For more information on the city’s Vision Zero initiative, visit their website.