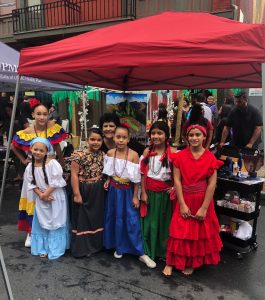 A past Hispanic Heritage festival

The Latino Hispanic American Community Center (LHACC) plans to celebrate the month with its annual festival in Allison Hill on Sept. 18.

After last year’s festival was altered to be a drive-thru event due to COVID, Merrick is looking for a taste of tradition as the 11th annual festival will be in-person again, she said.

There will be dance performances, music by the band “Los Monstros” and domino contests—a traditional game in the culture, Merrick said. As always, community members will fly colors from the country of their heritage in a flag parade.

There will also be plenty of food, including rice, beans, empanadas, pupusas, Guatemalan coffee and more from local restaurants.

Merrick is also looking forward to the center’s many sponsors getting a chance to interact with the community.

Additionally, UPMC health care providers will administer COVID-19 vaccines to children 12 years and older, as well as adults. Moderna, Pfizer and Johnson & Johnson vaccines will be available from 11 a.m. to 1 p.m.

In the past, the festival has drawn around 1,000 attendees. Merrick said that she expects this to be the biggest one yet.

However, they will extend the festival through two blocks of the neighborhood to accommodate for social distancing.

This event may be one of LHACC’s largest during the year, but Merrick said that the center has stayed present in the community, especially during the pandemic.

Every Tuesday, they distribute food to families in need, feeding over 800 families every month, she said.

The festival is just one more way for LHACC to support the Latino community in Harrisburg.

“It’s going to be the place to be on Sept. 18,” Merrick said. “It’s an opportunity to bring everyone together.”