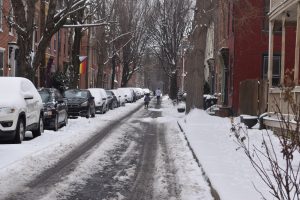 A view of Penn Street during a snowstorm in January.

As the remaining piles of snow from a few weeks ago melt away, it looks like they may build back up again tomorrow.

With another snowstorm bearing down, Harrisburg has announced free parking for city residents at the Locust Street Garage, beginning Wednesday night at 6 p.m. and extending through Friday at 6 p.m.

In addition, parking restrictions will not be enforced for street sweeping on Thursday, according to the city.

The city’s Public Works Department has 16 slow plow trucks ready to be deployed, and they will begin salting the roads at the beginning of the snowfall. If your street has not been plowed, call 3-1-1.

The National Weather Service has issued a winter storm warning for the Harrisburg area. The forecast calls for 6 to 9 inches of snow with a light glaze of ice.

Updated on 2/18/20 to reflect the extension of free parking until Friday instead of Thursday.