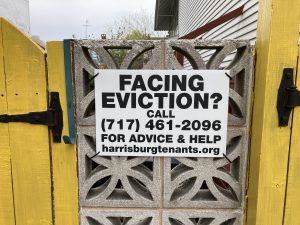 Harrisburg residents at risk for eviction can rest easy for another month.

Mayor Eric Papenfuse announced on Wednesday that the city has extended its ban on evictions for another month, through mid-May.

Harrisburg first enacted the moratorium in December, hoping to deter homelessness caused by the COVID-19 pandemic. This is the fourth time that Papenfuse has extended it.

The declaration covers anyone who is unable to pay rent and those whose lease has expired. Residents still may be evicted for criminal activity or other reasons.

Landlords do, however, have the right to collect rent after the bans expire.

The U.S. Centers for Disease Control also recently extended its federal eviction moratorium through the end of June.

In his declaration, Papenfuse said that, based on the widespread access to the COVID-19 vaccine and Dauphin County’s rent relief program, he believes the city will wind down some of its “extraordinary measures” related to the pandemic in the coming weeks.