1704 Walnut St. was full of illegally dumped trash before Harrisburg’s public works department cleaned it up.

For years, Assad Brunner had to deal with the heaping pile of trash on the property next to his restaurant, Sad’s Soul Food Café in Allison Hill.

“It was hurting my business,” he said.

But on Thursday, Harrisburg officials stood in front of a clean, trash-free lot, explaining that this is just the beginning of their cleanup plans.

Over the span of two days, Harrisburg public works personnel hauled out over 20 tons of trash that, for years, was illegally dumped on the blighted property.

“Behind me, as of just a week ago, was one of the worst illegal dumping, accumulation of blight and trash, sites that I’ve seen anywhere in the City of Harrisburg,” Mayor Eric Papenfuse said. “We decided to mount a collective action.” 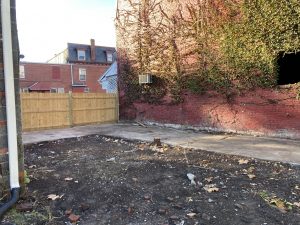 Cleaned up property at 1704 Walnut St.

Walk around the neighborhood, and you’ll see a number of blighted properties. While this has been an issue for years, the public works department is finally reaching the size and receiving the resources to be able to address the issue, Papenfuse said.

The department has doubled in size over the past eight years, according to the city. Public Works Director Nate Spriggs took his position just a few weeks ago, but has hired five new workers in that amount of time. City officials also pointed out the newly purchased machinery that makes large-scale trash cleanups possible. 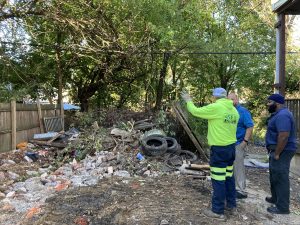 Harrisburg began cleaning up a property on 18th Street on Thursday.

Just around the corner, on Tuesday, the city demolished a house on 18th Street. The house was blighted and blocking public works from removing a large pile of trash in the backyard.

On Thursday, a crew was finally able to access the trash.

Mike Mayo, who lives in the neighboring house, stood across the street watching.

Mayo recalled hearing rats and seeing the animals crawling around the house and the pile of trash.

“Since they knocked the house down, I haven’t really heard much,” he said. 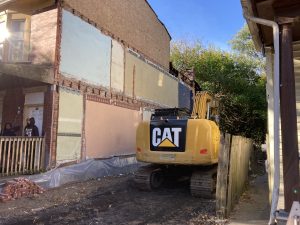 Harrisburg recently demolished a blighted building on 18th Street and began cleaning up trash from the rear of the property.

Crews also worked to clean up a property on Curtin Street in Uptown Harrisburg on Thursday morning.

To ensure the Walnut Street lot doesn’t fill up with trash again, security cameras were installed on Brunner’s Café and a fence was built. If trash is illegally dumped, the city will prosecute, Papenfuse said.

With all of these efforts, Papenfuse said the city is finally beginning to make substantial progress on the longstanding problem.

“We have a large backlog of illegal dumped sites throughout the city,” Papenfuse said. “We are going to make sure people see a noticeable difference moving forward.”

But for residents like Mayo, these efforts are just a small dent in a huge issue.

He pointed out several other properties on the block that were abandoned or blighted.

“It becomes second nature; you get so used to seeing it,” he said. “There are so many. This is just like scratching the surface.”