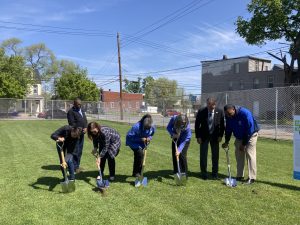 Officials ceremonially break ground on the Big Green Block project, on the recreational field behind the Camp Curtin YMCA

Capital Region Water (CRW) has partnered with the community center on a stormwater management project that will benefit not only the Y, but the neighborhood.

“We are here to break ground on what we know will provide a wonderful community amenity and have the added benefit of improvements to stormwwater management for this historic Harrisburg community,” said Charlotte Katzenmoyer, CEO of CRW.

The $2.5 million “Big Green Block” project will include constructing a rain garden and storage/infiltration trench along the edge of the Y’s parking lot and beneath the recreational field behind the Y. These measures will help prevent stormwater runoff from the parking lot and surrounding streets from overwhelming the sewer system.

Additionally, a green stormwater wall will be added to the back of the Y’s building. Planter boxes and troughs attached to the wall will help catch runoff water from the roof. Trees will be planted, as well.

All of these aspects of the project will manage 4.5 million gallons of stormwater annually, said Claire Maulhardt, CRW’s City Beautiful H2O program manager.

For local residents, this means reduced flooding during storms, better air quality and a beautified space, according to CRW. For the Y, it means fewer drainage issues, which they’ve had for years.

“This is an important day for Uptown Harrisburg,” said Jamien Harvey, executive director of the Camp Curtin and East Shore Y’s.

The project will also serve as an educational tool to teach the youth that visit the Y, Harvey explained.

CRW expects to complete the construction by September. The project will be financed through a loan from the Pennsylvania Infrastructure Investment Authority, known as PENNVEST. This month, CRW was awarded another large loan from PENNVEST for $41.6 million.

The project is another step towards realizing Harvey’s dream of revitalizing the neighborhood, he said. In March, the Y broke ground on an affordable housing project just down the street from its building. They are currently working to build four single-family homes for low-income residents.

The Big Green Block project will benefit those future homeowners, as well.

“It’s all intertwined,” Harvey said. “The environment is important. I’ll continue to fight to change this neighborhood. I get excited about this.”