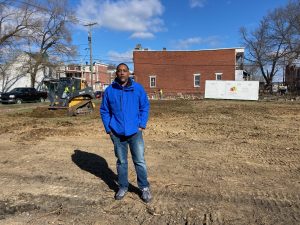 On a chilly Tuesday morning, Jamien Harvey watched bulldozers work on a lot at the corner of Woodbine and Jefferson streets.

Just a day before, he woke up in the morning, nervous if the project he had dreamt of for several years would actually happen.

But after years of planning, delays due to the pandemic and supply chain issues, Harvey watched a project to build affordable housing begin.

“This is important to me because I know what changes a community—environment and education,” Harvey, executive director of both the East Shore and Camp Curtin YMCA said. “We’ve got to get housing up, and we’ve got to do it fast.”

In October 2021, the Camp Curtin branch of the Y ceremoniously broke ground on its “Harrisburg Cornerstone Initiative,” which aims to eliminate vacant lots and provide homeownership opportunities to low-income families in the Uptown area.

The once empty lot at Woodbine and Jefferson streets, near the Camp Curtin Y, is the location of the $1.2 million first phase of the initiative. The Y is constructing four affordable single-family homes, each including three bedrooms, two-and-a-half bathrooms and an off-street parking space.

According to Harvey, there is already a waiting list of about 30 applicants for these four homes. They plan to select the buyers based on a lottery system.

The Y is working with The Erica Rawls Team real estate team at Keller Williams of Central PA for the marketing and sale of the homes. All applicants are required to take financial literacy and first-time homeowner courses, Harvey explained.

Harvey wasn’t surprised to see the significant interest in the homes. It has only deepened his belief in the demand for affordable housing in Harrisburg.

“This shows me that we need to continue to build and do it fast,” he said.

Harvey expects construction of the four affordable homes to be completed by mid-summer.

In addition to this project, he has a larger vision of continuing to build housing in the Uptown area, specifically the neighborhood surrounding the Camp Curtin Y.

“Homeowners take better care of their neighborhood,” he said. “It brings more eyes and ears to the community, changes crime and impacts how people take care of their properties. It makes huge differences.”

Additionally, he’s hopeful for how it impacts low-income families.

Harvey explained how families who purchase the homes will have instant home equity, as the buildings are appraised at $250,000 each, but are being sold for $150,000.

“The equity will give families generational wealth—that’s an ultimate goal of the project,” he said.