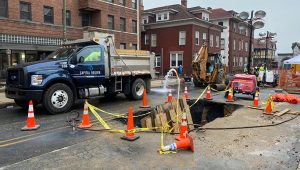 The Pennsylvania Infrastructure Investment Authority, known as PENNVEST, has approved a $41.6 million loan to the water and sewer authority for repairing and replacing water supply systems throughout Dauphin County.

“We have immense gratitude for the assistance this loan provides. This funding will help Capital Region Water invest in critical infrastructure, while offsetting the financial burden to our customers,” said Charlotte Katzenmoyer, chief executive officer of CRW.

CRW is one of 13 recipients statewide to receive a share of over $199 million in a recent PENNVEST initiative to invest in drinking water, wastewater and stormwater infrastructure.

With the loan money from PENNVEST, CRW has four planned phases for their project. They are as follows:

Water bills will not be affected because of this work, CRW said. The project is expected to begin on July 13 and be completed by June 2025.

According to Katzenmoyer, the PENNVEST loan will provide over $20 million in cost savings compared to a traditional bond financing, due to the low interest rate.

“The need to upgrade our water supply systems was necessary to provide safe and reliable access for all our residents,” Rep. Patty Kim (D-103) said. “Everyday access to safe water is essential to public health and safety.”