Mayor Eric Papenfuse was joined by students from the Sylvan Heights Science Charter School today as he cut the ribbon on a new playground at Cloverly Heights Park. The playground features all-new equipment, a rain garden, a pavilion, and a permeable pavement basketball court.

Summer break may be over, but playtime is just beginning in Harrisburg.

Mayor Eric Papenfuse today cut the ribbon on the newly renovated Cloverly Heights Playground, one of four play areas that were recently revamped with new equipment and green infrastructure.

After being closed all summer, playgrounds at Cloverly Heights, Norwood and Holly streets, Penn and Sayford streets and Royal Terrace soon will be open to the public.

Penn and Sayford and Cloverly should be open in about two weeks, the others sometime in October, Papenfuse said.

The four sites have been outfitted with all-new play amenities, and each one has unique features, Papenfuse said.

Three of the sites also have storm water management enhancements thanks to Capital Region Water.

“Our parks are the city’s greatest assets,” Papenfuse said during a sweltering press conference this afternoon, where he was joined by representatives from each of the project partners. “I’m glad we’re bringing all of our playgrounds up to the level that our community would like to see.”

The city will complete renovations at a fifth playground, at 4th and Dauphin Streets, next year.

Today’s ribbon cutting represented the culmination of a project three years in the making. The five playground sites were first targeted for renovations in 2015, but renovations stalled while the city pursued funding and collected public input.

Sheila Dow-Ford, executive director of Impact Harrisburg, said that the project was an obvious pick for a grant from her nonprofit organization, which was founded in 2014 with proceeds from the sale of the Harrisburg incinerator.

“Everyone remembers spending time on a playground,” Dow-Ford said. “My board thinks this project is very high priority, because our children are high priority.”

Students from the neighboring Sylvan Heights Science Charter School also attended the ribbon cutting. They helped showcase the new storm water management amenities at Cloverly Heights, including a basketball court made with permeable pavement. The students poured buckets of water on the asphalt to show how it absorbed liquid.

They also helped plant a rain garden, which will collect rainwater runoff from impervious surfaces.

This story has been updated with additional information about the openings for each playground. 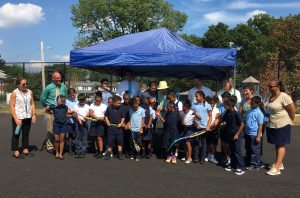 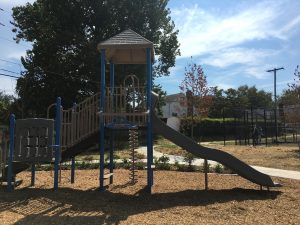 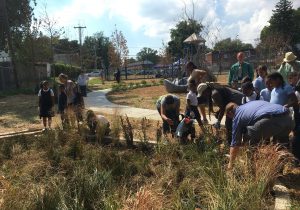 Students and project leaders plant a new rain garden, which will collect runoff from impervious surfaces.