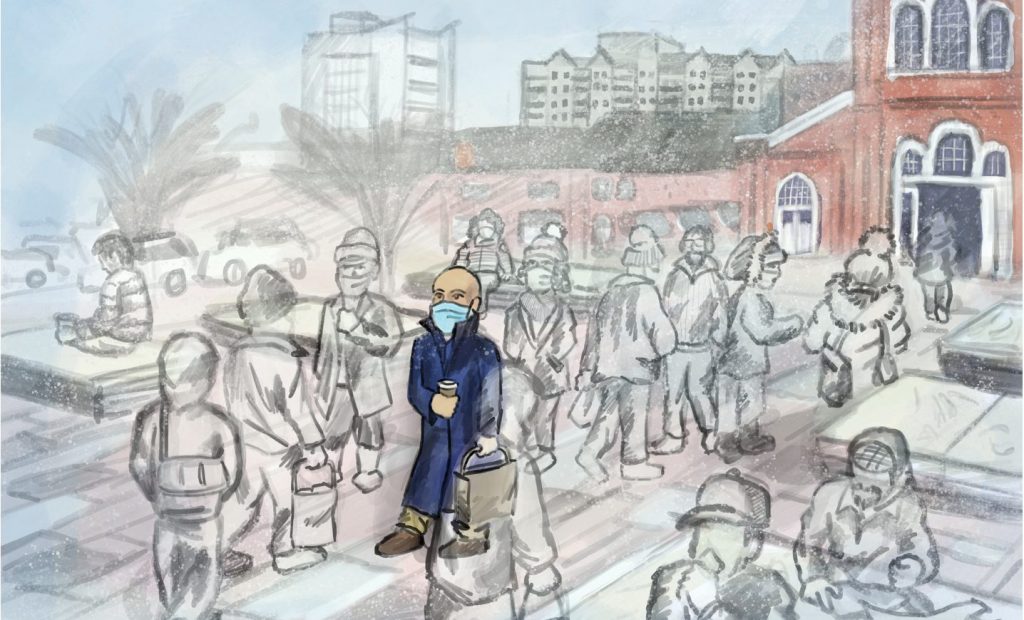 One year ago, during the first week of March, I did several things.

I walked over to Strawberry Square to get a coffee and do some work at a high-top table near the Little Amps kiosk. I met friends at the bar at McGrath’s. I ate lunch inside the Broad Street Market.

These all seemed so routine—little outings that I enjoyed but hardly thought about as special. Tomorrow or next week or whenever, I might well do them again.

For the past year—yes, it’s been an entire year—we’ve lived in a state of suspended existence, a strange reality where nothing seems quite right. Three-hundred-and-sixty-five days later, I still can’t regain my footing.

Attend a party? Go to a movie? Be near a stranger? Since March 2020, such simple acts have been regarded as reckless or rebellious.

I’ve often thought about what I miss most from our year of pandemic. Well, I haven’t seen my family, have had limited time with friends and haven’t dined inside of a restaurant. So, there are three, right there.

But, maybe what I most miss, at least on a day-to-day basis, is something called “collisions.”

In urban studies speak, collisions are those random interactions you often have in cities, when you venture out and randomly bump into a friend or have an unexpected conversation with a stranger. From these collisions, you share information, you learn, maybe you even collaborate or create.

In Harrisburg, collisions used to happen to me all the time.

I once joked that a Saturday shopping trip to the Broad Street Market took two hours longer than planned because of all the people I saw and talked to. Folks stopped to chat about Harrisburg or wanted me to join them for a beer at the Zeroday Outpost or pulled up a chair while I ate lunch.

It was half grocery shopping, half social excursion. I may have gone to the market for bread, but I returned with news tips, story ideas and life updates.

On Saturdays, the Broad Street Market, in particular, has a very high “collision density,” another nerdy term that just means that there are a lot of people in one place to run into, to interact with and to learn from.

Or, let me correct that, the market used to have a high collision density.

Sure, there are still people shopping there now, but you can’t sit at tables anymore, you can’t linger over coffee, and you can’t really strike up random conversations. But who would want to anyway, when everyone is half-hidden behind a mask and your next close encounter could lead you to the COVID ward?

The same can be said of any public space. In Harrisburg, that might be your favorite coffee shop, your neighborhood bar, your regular restaurant—your theater, art or music place.

The virus has robbed us of so much, starting with people we love. But it’s also taken away our many small enjoyments, including random interactions that we didn’t even think much about until, one day, they were just gone.

For the past year, we’ve been living in a strange, foggy, unwelcome reality of stay away, stand back, don’t talk to me and don’t touch.

Last year, on the first weekend in March, I called an Uber, rode over to the mall and did some clothes shopping. The place was packed.

During those three hours, I had dozens of unexpected conversations and interactions: fellow shoppers, salespeople, a family at the next table during a coffee break. I even ran into a couple from my neighborhood and, inevitably, they had information to share. Yes, collisions can happen even on the west shore!

But they’re really synonymous with the city and, actually, are one of my favorite parts of living in an urban environment. Oh, to be greeted again on a Harrisburg street corner by a smiling face, a firm handshake, a hug.

In 10 years’ time, when I look back on our year of pandemic, I may remember something about the daily case counts, the business closures, the countless Zoom meetings. However, I likely will remember it most by how it made me feel. “Empty” seems to be the most appropriate word I can think of right now.

We’re told that we may be able to resume our normal lives as we move through 2021. Sign me up. Then stop me on the street, sit at my table, come share a beer with me, talk, gossip. I’m collision-ready.