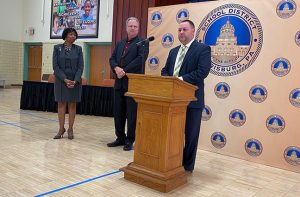 As COVID cases continue to spike, Harrisburg student-athletes are stuck on the sidelines.

Acting Superintendent Chris Celmer announced at a Monday night school board meeting that the district’s winter sports schedule will be postponed.

“We are going to continue to follow the data,” Celmer said. “What’s even more concerning about winter sports is that they are indoors not outdoors.”

Fall sports were also postponed at the beginning of the school year but geared back up in October as COVID cases decreased. However, after a football player contracted the virus, athletics were halted again.

Celmer said that the district wants to see a decrease in virus spread before considering resuming athletics and re-opening schools. The benchmarks include a three-week period of sustained testing positivity rates from 3 to 4% and incidence rates per 100,000 people below a rate of 50 in Dauphin County.

He also said that the district will look to see what the Mid Penn Conference has to say in the near future.

“We are going to continue watching the numbers in the coming weeks,” Celmer said.