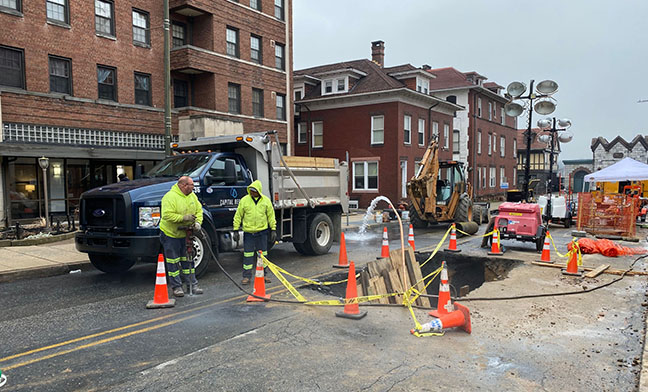 Capital Region Water is proposing small increases to its drinking water and wastewater rates for 2021, while keeping the stormwater fee unchanged.

At a board meeting last week, CRW presented its budget plans for next year, which includes increases of 2% in the drinking water rate and 3% in the wastewater rate compared to 2020.

The new stormwater fee, which was implemented just last month, would remain the same.

“We work very hard to find ways to keep the rates down while still doing what we need to do and, frankly, exceeding those things,” said board chairperson Marc Kurowski during the two-hour virtual meeting.

The board will vote on the new rates during a virtual meeting on Nov. 24, as well as on CRW’s operating and capital budgets for 2021.

During the meeting, CEO Charlotte Katzenmoyer described the current year as a challenging one for CRW, given the fallout from the pandemic.

She said that some costs increased, including for more personal protective equipment, while the utility’s revenues fell short by more than $2 million due to decreased water and wastewater use by commercial customers and a three-month delay in implementation of the stormwater fee.

That loss will not immediately be passed on to customers, but will be paid off over time, according to Douglas Keith, CRW’s chief financial officer.

Looking ahead, Keith said that he anticipates similar small increases to drinking water and wastewater rates over the next several years, as CRW tries to keep increases more stable and predictable than in recent years.

CRW had planned to keep the stormwater fee unchanged through 2022. However, because the fee is new, CRW is uncertain about collection rates, which may affect fee decisions after next year, Keith said.

In non-budget news, CRW in 2021 expects to complete the move into its new headquarters at 3003 N. Front St., which was delayed due to the pandemic. Katzenmoyer said that she expects CRW’s new customer service center to open there in the spring.

CRW also has several major capital projects on tap for 2021. These include green infrastructure stormwater projects in the South Allison Hill and Camp Curtin neighborhoods and the ongoing improvement of stormwater collection sewers throughout the city.

In addition, CRW expects to continue improvements to its Front Street interceptor, a century-old wastewater main that runs from Susquehanna Township to the Front Street pump station in Shipoke. That project involves the installation of new pipe liner to reduce leakage, failures and sinkholes.

The project now will continue farther south, along the Susquehanna River through much of Midtown and downtown Harrisburg, lining another 14,000 linear feet of concrete pipe. Work should begin in late 2021, with a 12- to 18-month construction period anticipated, according to CRW.

For 2021, CRW also hopes to finalize its long-term control plan with the U.S. Environmental Protection Agency and the state Department of Environmental Protection. CRW has been operating under a “partial consent decree” with the agencies pending approval of a long-term plan to reduce the flow of wastewater into Paxton Creek and the Susquehanna River, the result of the city’s antiquated, combined stormwater system.

“Hopefully, during 2021, we’ll be able to return to normal operations, whatever that might be as we move through the next process with the COVID pandemic,” Katzenmoyer said.

Click here to see the full video of the CRW board meeting.