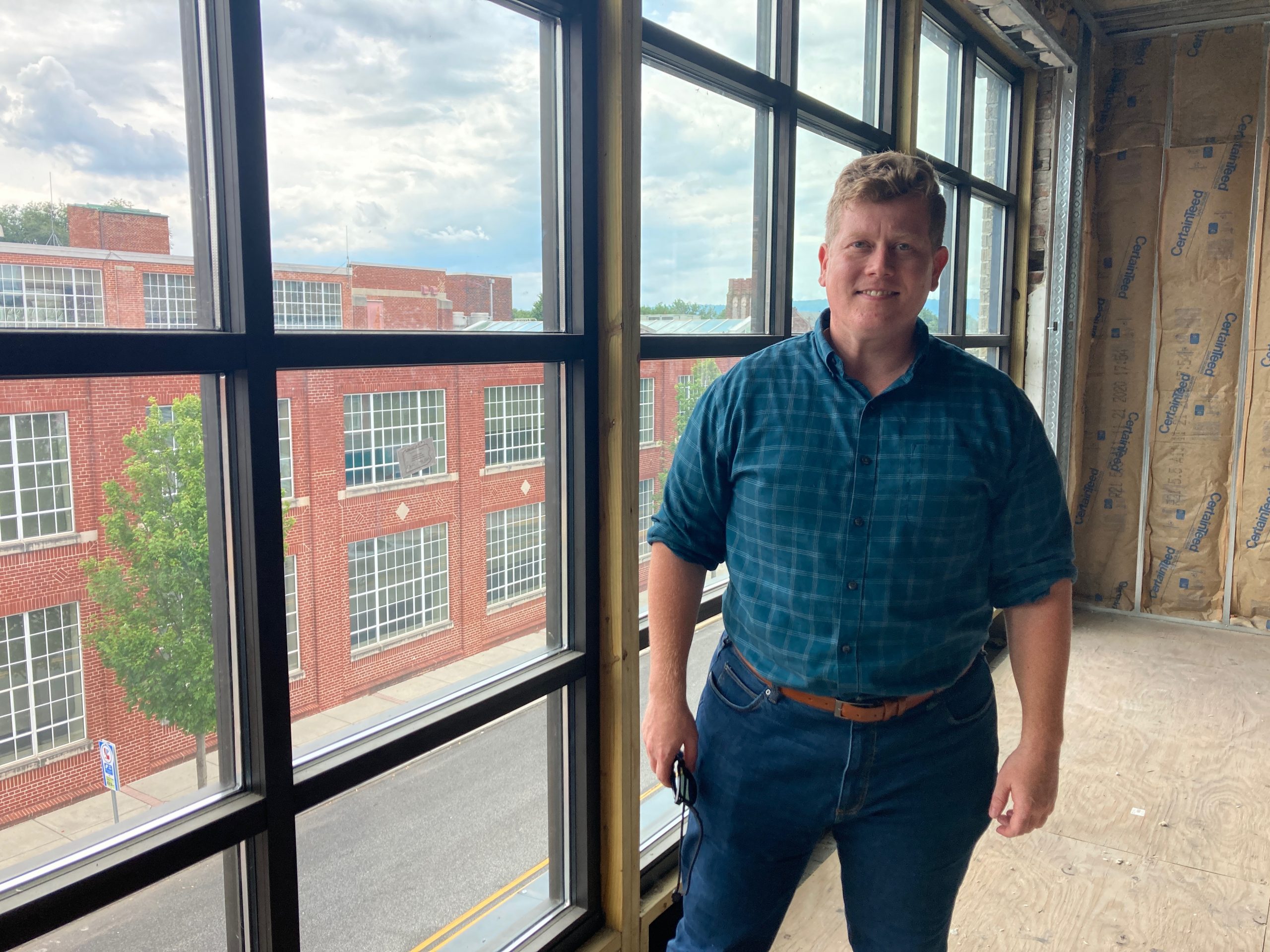 Nate Foote, owner of the “Carpets and Draperies,” standing in one of the apartments.

For seven years, Harrisburg resident Nate Foote walked by the same dilapidated building in Midtown, thinking about its potential.

In December 2020, he decided to do something about it.

Foote purchased and prepared to renovate the property, known as the “Carpets & Draperies” building, on the 1500-block of N. 3rd Street in Harrisburg. Since then, the building has undergone a total transformation, with construction finally nearing the finish line.

“I saw a lot of potential and thought this is a place I’d like to invest in,” Foote, an attorney, said. “This was really the last building in this stretch of 3rd Street that was vacant.”

Formerly Gerber’s Department Store, the century-old, 4,800-square-foot building is now on its way to housing five apartment units and a first-floor retail space. Broad Street Market vendor Raising The Bar will open a bakery/café in the space come fall.

The renovation process was extensive as Foote’s contractor, Harrisburg Commercial Interiors, had to gut the entire building, which has been vacant since the mid-2000s, and start from scratch. One of the few things that remained was the antique “Carpets and Draperies” sign on the front façade, now updated with paint and new lighting. As the name has stuck with the building over the years, Foote plans to continue calling it that. 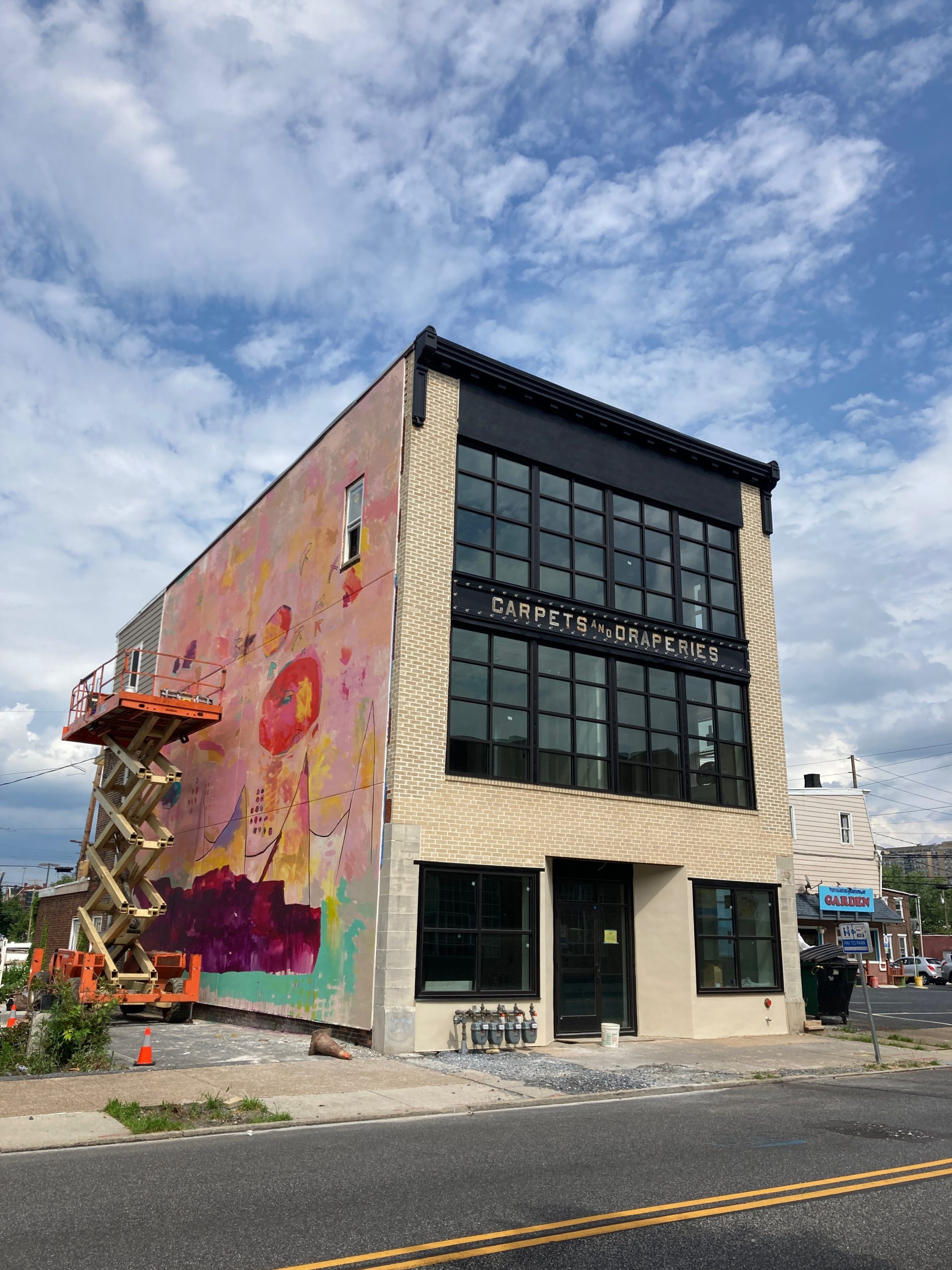 The three-story brick structure features sprawling new windows, fresh flooring and a modern feel. There are two, one-bedroom units on the first floor, two, two-bedroom apartments on the second floor, and a roomy apartment on the third floor that Foote plans to occupy himself.

He characterized each unit as unique. Some retain industrial design aspects, and one includes a bonus room and another a deck. Two of the five include a floor-to-ceiling living room window.

Foote hopes to complete the units by the end of the month and lease them by September. He expects to rent the one-bedroom units for around $1,200, with the two-bedroom apartments somewhat higher in price.

Instead of wet paint, the first-floor retail space will soon smell of fresh baked goods when Harrisburg bakery Raising The Bar moves in.

Owners Casey Callahan and Timishia Goodson opened their businesses, known for made-from-scratch, small-batch baked goods, in the Broad Street Market in 2016. As the business has grown over the years, the pair has been in need of a larger production space.

In their new location, Callahan and Goodson will offer all of their staple menu items—croissants, baguettes, almond cake, brownies and more. However, they will also expand the menu to include sandwiches and coffee.

Goodson hopes to foster a “chill vibe” where people can unplug from their phones and relax.

“We want it to be a place where people want to come and enjoy their food,” she said.

Raising The Bar will also maintain its stand in the Broad Street Market.

Topping off the Carpets and Draperies building renovation is a large mural by Sprocket Mural Works, painted by Harrisburg artist Tara Chickey. The abstract mural extends the height of the building with pink, yellow, purple and blue hues.

In total, Foote expects to invest around $700,000 into the building by the time it’s complete, but it’s a project that he’s been interested in taking on for years.

“I hope this continues the trend of new business moving in and renovations taking place,” he said. “I think there’s a lot more that’s going to happen in the coming years.”