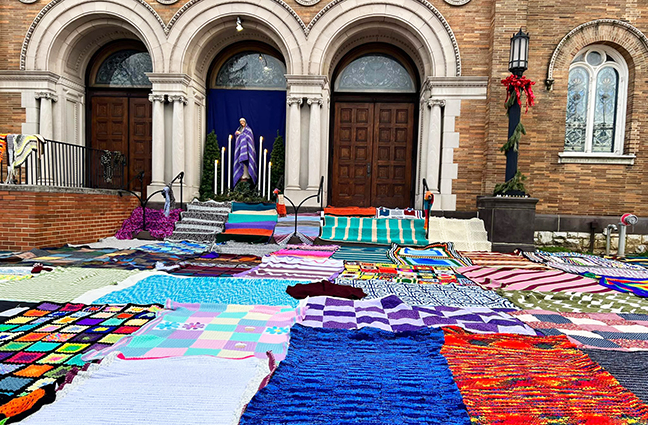 The Homeless Memorial Blanket on display in 2021

The Homeless Memorial Blanket Project is heading to our nation’s capital.

Last year, on Dec. 21, the project covered First Lutheran Church in Carlisle with over 200 handmade blankets to be distributed to those experiencing homelessness and to educate folks about homelessness.

“People kept saying to me, are you gonna do it again next year?” said organizer Pat LaMarche.

LaMarche wasn’t convinced. This project required intense organization, hit a few snags and required spending many cold hours outside (the irony is not lost on LaMarche).

“I’m not doing it unless it’s on the west lawn of the Capitol,” LaMarche told those encouraging her to repeat the feat.

She thought that would end the discussion, but, instead, supporters, who she lovingly described as her “enablers,” said, “Do you think we could get it?”

Getting it turned out to be easier than expected. LaMarche applied for the space, met with the architect of the Capitol, an agency responsible for the Capitol grounds, and after acceptance, was assigned a Capitol police officer liaison.

So why head to the Capitol?

“I think part of it is the symbolism of Washington, D.C.,” said Rev. Matthew Best. “It’s very powerful that this is our nation’s capital, and this is a national problem we have here in Cumberland County.”

In August, just in Cumberland County, some 484 people contacted coordinated entry, the starting point for those looking for help through the local shelter system. Best explained that those are just people who sought help, not those living on the street and not seeking shelter, or those seeking help due to domestic violence.

Best said that projects like these are important to give people an understanding of the humanity of those experiencing homelessness.

“Lutheran Christians believe that God sees humanity as people before problems, and too often we see people as problems before seeing them in their humanity,” said Deacon Marsha Roscoe, assistant to the bishop in the Lower Susquehanna Synod.

Roscoe and her daughter participated in last year’s Homeless Memorial Blanket Project in an experiential way. They laid on a bench in Carlisle’s Memorial Park, covered with a blanket for an hour. They felt helpless, except for one homeless man, who, recognizing Roscoe’s daughter’s age, asked if she was OK or needed anything. No one else offered any concern or help. Roscoe was forever changed by that gesture.

“There, someone experiencing homelessness automatically had an outward response for someone else on a bench,” she said. “And here we are, those of us in the church, wondering if we can, should we do anything? It was this person’s natural disposition. I had some soul-searching to do. What’s going to be my role from here on out?”

She’s now helping to take this project national and is amazed by people’s response.

“There are thousands of hours these artisans have put into this,” Roscoe said. “Every single blanket has its own story.”

The goal is to get 100 handmade blankets from each state. The word is spreading at events like the Wisconsin State Fair quilting competition, through a weekly shopper newspaper in Boston, and via a conversation at a yarn shop in Minneapolis. Each state has a Facebook group, where blanket-makers can find out specifics of how to get their blankets to D.C., when the time comes.

Ultimately, the project intends to coat 9,000 square feet with a giant blanket created from all of these individual creations, three times last year’s size.

The project comes with a challenge to our leaders.

“We are asking every member of Congress, House of Representatives and senators, to take one blanket to their home district and go to a shelter with it,” LaMarche said.

That’s important because most people have little exposure to the reality of homelessness. Comfort is a barrier to education and compassion.

“This is also educational for people to get an understanding,” Best said. “They’ve probably never encountered these types of situations before in their own lives. I hope they never had to experience that. We want to open up eyes so that you can’t un-see it, because that’s how change really happens.”

LaMarche described the reality of an unsheltered friend, Jeff, who had unfortunately died the day of her interview. He had cancer while living on the streets and dealt with a colostomy bag while sleeping on the floors of shelters. He volunteered fixing bikes in Harrisburg and eventually did get housing. He died at about 63 years old.

“So, time runs out, especially when you’re not well, and you don’t have the things most of us have,” LaMarche said. “Chronically homeless people die 30 years earlier [than housed people].”

This is a community problem, and the community can be a part of the solution, according to Roscoe.

“There’s not one solution that can be across the board for the whole population,” Roscoe said. “Our call is to say, if congregations, social ministries, organizations work together, then we can address it at a systemic level.”

She suggested learning about what’s already happening and tapping into that.

Folks can support the project by heading to D.C. on a bus that will transport the blankets, then helping to carry and arrange all the fabric and yarn creations, or by traveling to the Capitol on Dec. 21 to see the display. Donating to the cause for a variety of expenses can help, too. Creating a blanket can send a message of love and support to those who are unhoused.

“Each blanket represents an act of deep compassion,” Roscoe said.

To learn more about the project and how to participate, visit https://memorialblanket.org.