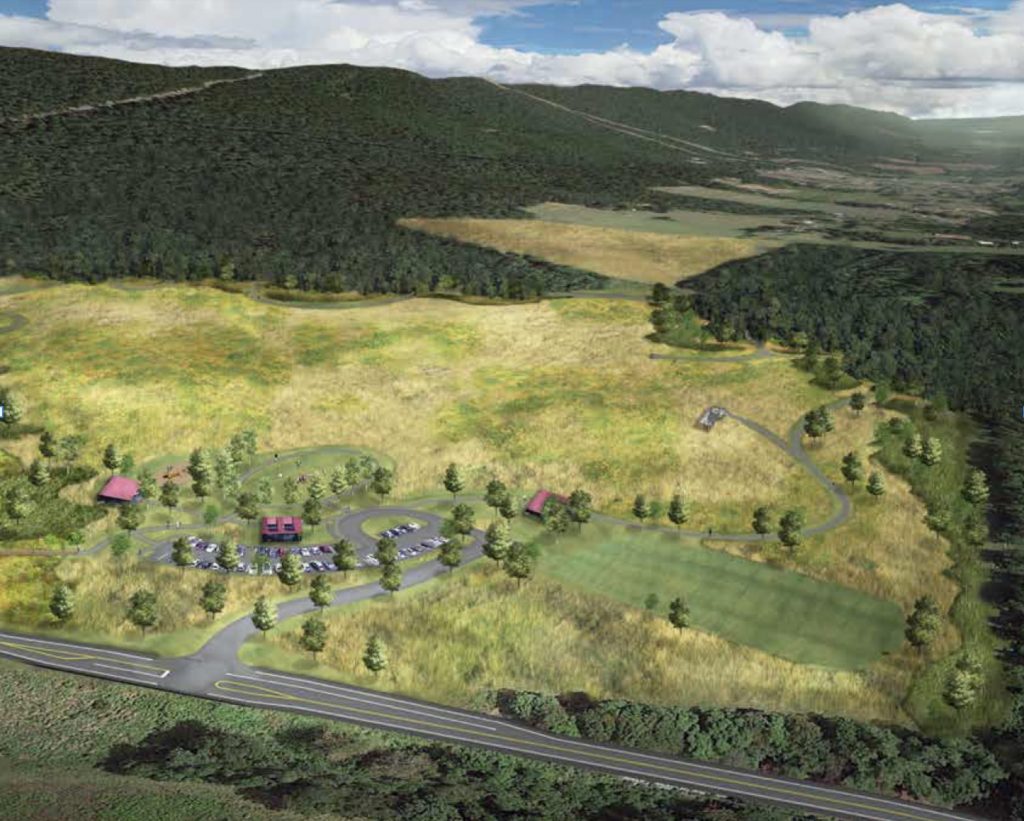 Photo simulation of proposed amenities and meadow restoration in the Airstrip Meadow.

During a hike in Detweiler Park, Megan Caruso found her first-ever four-leaf clover, plus 87 more. Wondering if it was dumb luck, she kept alert on her next visit, and there they were—20 in the area known as Airstrip Meadow.

As she plucked a bouquet, she was suddenly overwhelmed with a sense of her grandmother, a first-generation Irishwoman who carried a four-leaf clover enshrined in resin.

“I haven’t just sat in the grass and hung out like that since I was a little girl,” said Caruso, a park regular and TheBurg’s creative director. “Detweiler Park is a really special place.”

Dauphin County is making a $4.5 million bet that many county residents and visitors will experience the same peace in the green refuge of Middle Paxton Township. Gradual upgrades are planned to enhance public access while preserving the park’s natural value. County officials and park supporters say the move is timely, coinciding with the pandemic-inspired urge to find respite in nature.

In 2016, the Detweiler heirs donated and sold 411 acres of greenery, farm buildings and the family home to Dauphin County, hoping for the place that Meade Detweiler had envisioned, where “habitats are preserved and managed in perpetuity for wildlife.” Almost immediately, the parkland opened as-is for hiking, fishing and agricultural education.

All told, there will be seven miles of trails, an education center, an Appalachian Trail connector, enhanced ADA accessibility, primitive camping and restrooms. Everyone wanted restrooms.

With that one donation, Dauphin County’s parkland acreage almost doubled, Commissioner Chad Saylor told TheBurg during a tour of the park.

The master plan will unspool for years to come, depending on funding, but “phase one” is ready for takeoff—pun intended, because it’s slated for Airstrip Meadow. Seems that a previous owner ran a crop-spraying biz from this spot. The orange balls alerting his aircraft to utility lines still hang across the road.

This will be the park entrance and gathering place, completed by fall 2023, Saylor hopes. County commissioners designated $1 million of American Rescue Plan Act funds to build a pavilion, ADA-accessible restrooms, event field, parking lot and a helipad for Appalachian Trail evacuations. The next phase is expected to carve out an ADA-accessible meadow trail.

While Dauphin County is dotted with parks, its existing flagships—Wildwood Park and Fort Hunter Park—are clustered in Harrisburg and Susquehanna Township, convenient getaways for city dwellers and suburbanites. Detweiler Park, nicknamed “The Det,” delivers a showcase park to the county’s rural north.

Airstrip Meadow also came with a hangar (of course) where planners envision a future community flex space. Beside it, the 19th-century barn could become an open-air market, “for a kind of farmers’ market atmosphere,” said Dauphin County Parks and Recreation Director Anthea Stebbins.

“Won’t that be cool?” Stebbins said. “This is going to turn into a neat community area.”

The county is expanding programming in its northern Dauphin parks, she added. Detweiler this summer will lead explorations of fireflies, “Leave No Trace” lessons and nature journaling, teaching the enjoyment of nature to an expanding circle of residents.

“People are learning more and more about the healing effects of nature and how being in nature reduces stress,” Stebbins said.

When corporate partners support Dauphin County Parks and Recreation programs, “that gives you an idea of how the business community values these events,” said Saylor.

He expects the same robust support for Detweiler Park. County officials are working to bring wi-fi to the park, and Saylor hopes for an app directing users to trails, amenities and events, perhaps augmented with coupons from local businesses.

“It’s a real quality-of life-issue,” he said. “To put places like this in beautiful, green, lush spaces that everyone can enjoy, I think, will make everybody’s property values improve. We’re hoping with an app to maximize the economic benefit.”

“With inflation, this allows people to have an outing that’s free, and if they want to stop and have a treat at an ice cream shop, it’s benefiting local businesses,” she said. “Maybe people can’t afford to go out much right now, and our parks provide a sort of staycation opportunity.”

As for ice cream, it comes up in every conversation about Detweiler Park. After all, the original site of the legendary 3B Ice Cream still stands along the park’s boundaries, selling frozen treats, sandwiches and subs.

“When you have a nice day, people go for a hike,” he said, adding that development of Detweiler Park into a destination “is not hurting anything.”

Hawks migrate, and Detweiler Park is “smack in the middle” of Pennsylvania’s Kittatinny Ridge, an Audubon global “Important Bird Area,” said Sally Zaino. As president of the Hummelstown-based Manada Conservancy, she served on the Detweiler Park advisory committee, finding that her message of conservation resonated with the full group.

“Some people were really interested in the park’s recreational value and access to the public, and other people were interested in its natural resource value,” she said. “The county did a really great job of pulling together a group with varied backgrounds.”

The region, known as Clarks Valley, is home to large tracts of undeveloped forest, thanks to Manada Conservancy’s preserved properties, state game lands and forest, and the Appalachian Trail. Detweiler Park is the “gateway to Clarks Valley,” Zaino said.

Preventing the fragmentation that comes from pockmarked development creates migration corridors for birds, critters and even trees escaping the threat of climate change-driven extinction.

Detweiler Park is “a great birdwatching place,” with nesting warblers and meadowlarks now active, Zaino said. Porcupines roam the forest. Salamanders nest along the streams. Ice cream stops at 3B are a tradition for Manada Conservancy members monitoring their nearby lands.

“The last one I tried was a coconut almond swirl,” Zaino said. “That was really good.”

The pandemic has taught the land trust community about the importance of their land preserves that are open to the public.

“We need to get people outside just for finding peace and being able to appreciate nature,” she said.

In a model honed at Wildwood and Fort Hunter, a friend’s group, partners and volunteers will offer the manpower and fundraising that help keep Detweiler Park in shape.

“The leaders of the county decades ago came together and did the planning and made the right decisions to make two beautiful gems in the county grounds,” Saylor said. “Now, it falls to us to do the same thing here, so decades from now, people will look back and say, ‘Job well done.’”

The Detweiler Park Master Plan was completed in March 2021. It envisions: