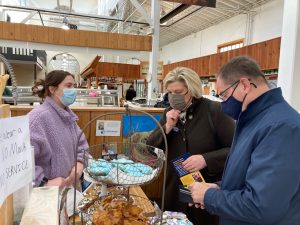 On a cold, windy day in the Burg, the city’s mayoral race heated up.

Schankweiler released his agenda, which includes an emphasis on decreasing violent crime, increasing accessibility within the administration, supporting the school district and empowering neighborhoods.

“I love this city,” Schankweiler said during a phone call with TheBurg. “The reason I’m running is that I’ve been seeing some things, as have many folks in Harrisburg, that we need to fix.”

Schankweiler will run for the Democratic nomination during the May primary against two-term Mayor Eric Papenfuse. Former city council member Otto Banks is expected to announce his candidacy on Monday at a private event, as well.

The retired business owner has not held a political position before, but believes his former leadership positions qualify him and give him a unique perspective. In addition to overseeing a publishing company, he was a founder and the first volunteer board member of Harrisburg University. Shankweiler also chaired the state-appointed Intergovernmental Cooperation Authority.

In December, Schankweiler launched a survey to hear from residents on their top priorities and said that he received hundreds of responses.

He said that these voices and those of the residents he spoke with in person shaped his platform.

Schankweiler promised that he would address violent crime from his first day in office by holding a Citywide Action Summit on Violence Prevention and adopting community policing efforts. He said that promoting racial and cultural competence is important, as well.

“I, like so many people, am heartbroken about the current violence in the city,” Schankweiler said. “That’s not our city. We have to fix the violent situation.”

He also pointed out the need to work on road infrastructure and street litter, both recurring concerns from those he spoke with.

While the mayor does not have oversight on the Harrisburg School District, Schankweiler said that he would actively work alongside the district to propose safety initiatives around the school buildings and create a task force to assist students with job training.

Due to the pandemic, many city businesses have taken a hit over the past year. Schankweiler said that he has a plan to support struggling businesses by establishing an Office of Minority Entrepreneurship & Small Business Growth to mentor, train and attract businesses to Harrisburg.

On the housing front, Schankweiler said that he plans to address affordable housing and blighted areas of the city by establishing a Commission on Housing and Home Ownership.

On his website, Schankweiler has posted an agenda of issues that he hopes to tackle and, on Friday, said that he believes he can get it all done.

“Let’s put these away once and for all and move on,” he said. “We need to set a new tone in city hall that says we are ready to take on these challenges. It takes something that the city hasn’t had.”

During his stop at the Broad Street Market, Schankweiler spoke with business owners and customers, one being Brielle Glumac of Doggie Delights.

“I know he has already been successful, and I know he will be great,” Glumac, who knows Schankweiler personally, said. “I think he really wants to help the area.”

For more information on Dave Schankweiler and his platform, visit https://daveforhbg.org/.