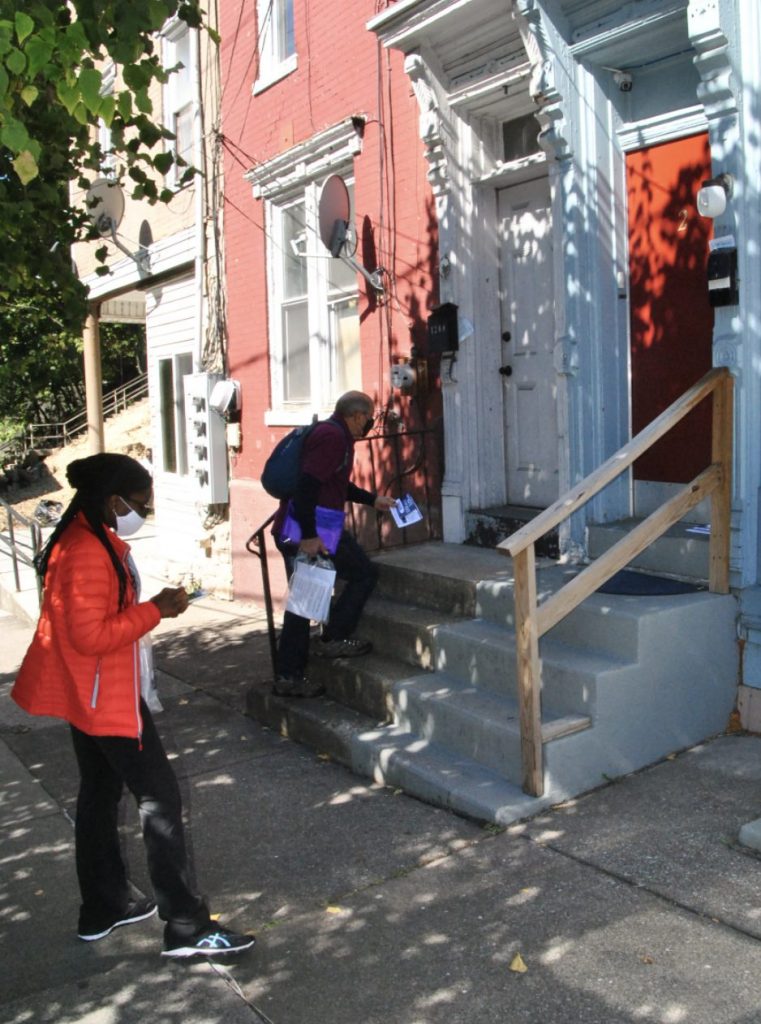 Wanda Chenault never thought much about voting. Her voice didn’t matter, she thought.

There was much more pulling at her attention anyway. She was a single mother living in Allison Hill and, most recently, fell into a period of homelessness.

When Chenault met Leta Beam, she had no idea how to register to vote. But when Beam meets someone, that new acquaintance often finds it hard to walk away without registering.

For over three years, Beam and her organization, Power to the Hill, have canvassed the South Allison Hill area, knocking on doors and hosting events to encourage civic engagement.

“We want to connect the dots that voting is the first baby step to becoming an active citizen,” Beam said.

The way they do this is through relationships, Beam said, meaning, if you live in their community, you’ll see them around—a lot.

Once a month, Power to the Hill holds voter engagement days when volunteers go door-to-door answering questions and registering people to vote. Beam said that, through relationships with local churches and nonprofits, they also set up tables at services and events to reach people there.

Power to the Hill is non-partisan, but believes everyone should have their voice heard.

“If everyone said, ‘my vote doesn’t count,’ where would we all be?” Beam said.

Not that long ago, that’s where Chenault was—feeling like her voice was too small to make a difference.

Power to the Hill covers precincts 1, 2 and 3 in Allison Hill. In recent years, Beam said, voter turnout has been low in this area. It’s especially low for local elections, she added.

In an often-transient community disengaged to voting, Beam and her team have had their work cut out for them, but you have to start somewhere, she said.

After Power to the Hill started in 2017, it took about a year to gain traction in the community. Beam identified the 2018 midterms as the first election cycle when they began to make inroads.

They also joined Allison Hill outreach nonprofit, Gather for the Spirit for Justice, and partnered with organizations like Tri County Community Action to expand their reach.

“We really became clear about our mission—making voting easier and more straightforward for people,” Beam said.

Not long ago, Beam was sitting at a table, representing Power to the Hill at an event. She began talking with a young man, trying to encourage him to register to vote. But the man told Beam about his criminal record, certain he had lost his right to vote. He was wrong, Beam told him. He could vote. The man left with tears in his eyes.

“One of the most rewarding things is telling someone who has a felony conviction and thinks they can never vote again that they can,” Beam said. “We get to tell people you can start over.”

Chenault now works in the shelter she once lived in. There, she oversees 18- to 21-year-old women, providing them with support.

With many of the women being just of age to vote, Chenault makes sure they know how to register.

“I make it a priority to talk with them,” she said. “I let the young people know how important it is to vote.”

Chenault taught some of the women how to fill out their mail-in ballots for the upcoming presidential election.

With the COVID-19 crisis overlapping with this election cycle, Power to the Hill volunteers have had to get creative.

They’ve engaged in non-contact canvassing, dropping information packets off at doors and making phone calls. Beam said that they’ve been doing a lot of education on how mail-in voting works. The group has attended numerous events and visited churches and organizations to engage more residents in the 2020 election.

“This election is very important,” Beam said. “We want all our neighbors to get out and vote.”

To Beam, voting is just the first step to becoming an engaged citizen.

Now that Power to the Hill is widely recognized in the community, the group wants to take the next step, Beam said.

They are partnering with other local organizations on a community action project called “Light the Hill.” The project’s goal is to engage community members to work with the city to make sure that the streetlights are maintained. She said that they may assign street ambassadors who will regularly report on the state of the lights in Allison Hill.

“We don’t just drop in two months before an election,” Beam said. “We are doing something 12 months out of the year. This is not going to change overnight. We are in it for the long haul.”