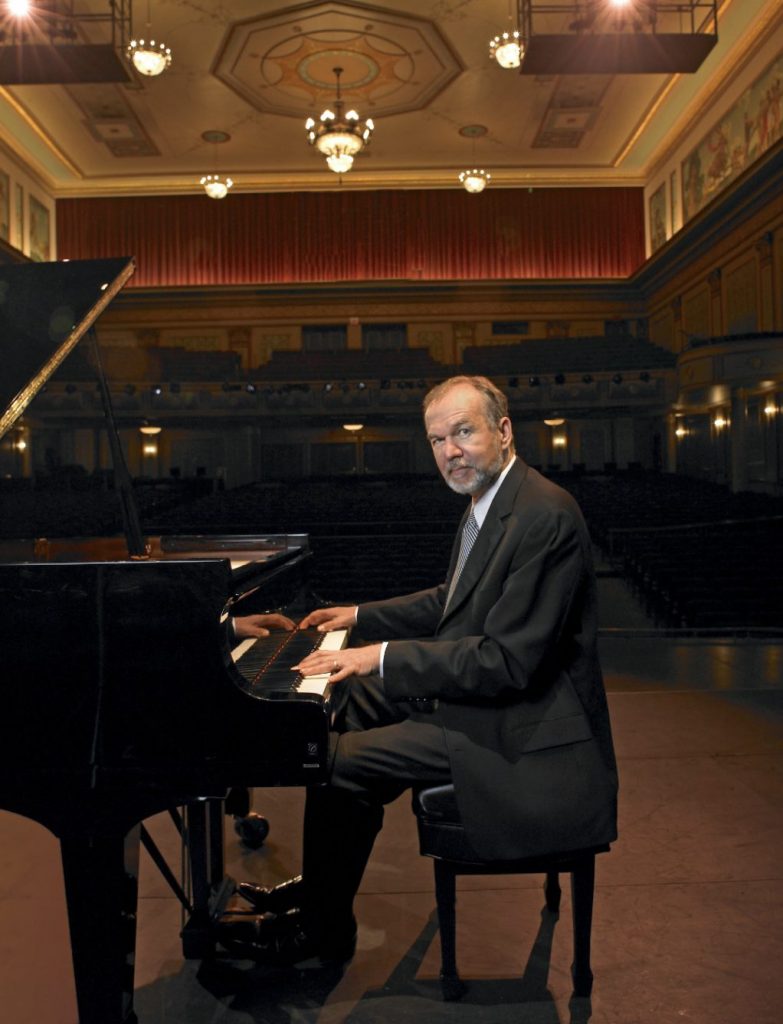 “This’ll say a lot about Steve.”

Andy Herring is sharing a story about Steve Rudolph. The pianist had retired as executive director of Central Pennsylvania Friends of Jazz in October 2019. The group’s board had an idea for a fundraiser in Rudolph’s honor. Why not give Rudolph a chance to play with all the greats he’d always dreamed of playing with?

Rudolph had “kind of a different idea”—a reunion concert of colleagues across the decades.

“That says something about Steve,” Herring repeated. “His career is built on friendships.”

The Sept. 26 “This One’s for You!” concert presents three bands representing three eras in the career of Rudolph, whose ubiquity in public conceals a behind-the-scenes presence that strengthened and solidified the central Pennsylvania music scene.

Rudolph’s story in Harrisburg begins with that standard, “Danny Boy.” And money laundering.

Short version: The Indianapolis native was touring with the Tommy Dorsey Orchestra in 1978, grabbing practice time on every beat-up hotel piano he could find. At the Holiday Inn Town, now the Crowne Plaza Harrisburg, he was playing “not a fine instrument” in a hallway near the kitchen. A passerby asked to sing along (hence, “Danny Boy”). The man said he was the new manager, in search of a house jazz band.

“Riding around in an iron-lung bus 2,500 miles a week and playing seven nights for a little over a year had gotten very old,” Rudolph said. “I sat down with him and convinced him to hire my trio with guest artists.”

Unintentionally, Rudolph had walked into “some sort of organized crime situation.” There were benefits. Laundering ill-gotten gains meant generating lots of actual cash, so Rudolph gained fame and name recognition from the constant advertising meant to drum up crowds.

How quickly did he get an inkling?

“In about three days,” he said. “They treated me very well. They made me entertainment director for the three hotels they had. They gave me a room and a car and did my laundry”—the type that literally goes in the washing machine—“so what did I care?”

In those days, the Harrisburg area had few jazz clubs but many fine musicians and, as Rudolph became established, a constant stream of guest artists. When the Holiday Inn Town gig ended in 1980, Rudolph banded with Jack Snavely, Lee Swartz and Russ Neff to found Central Pennsylvania Friends of Jazz, stoking a base of fans eager to keep live jazz alive.

Rudolph would find two other steady gigs, first at the Lucky 7 in Harrisburg, and then on staff at Hilton Harrisburg for 22 years. Through it all, he was working behind the scenes, as a Friends of Jazz board member and volunteer.

Rudolph first became a businessperson “out of desperation.”

It was in Indianapolis, where a thriving jazz scene of legendary talents—Wes Montgomery was born and died there, for cripe’s sake—bred fierce competition for gigs. Rudolph learned to create work simply by walking into clubs and convincing the owners that they needed music. His rule for getting gigs?

“Count the chairs, and then imagine how many dollars per chair the guy will pay before he doesn’t like jazz anymore,” he said.

Rudolph carried those skills to Harrisburg, bringing jazz to a long list of clubs.

“It wasn’t hard to do because I had a following,” he said. “As soon as we played in a place, they suddenly got an influx of new customers.”

In 2012, Friends of Jazz was adrift, and Rudolph stepped in as executive director, while still playing gigs. Today, Herring calls Rudolph “the founder that every executive director wishes they could succeed”—supportive, available to answer questions, but never controlling.

Once, advising Herring on the balancing act of filling spaces with quality acts while keeping audiences and venues happy, Rudolph offered “one of the best pieces of advice ever.”

“When you think, ‘I want to tell so-and-so what I’m really thinking,’ that only helps you, and actually, it doesn’t even help you,” Rudolph told Herring. As Herring interpreted it, “It’ll make you feel good right away, but don’t burn the bridge.”

“Steve is a minister of tact,” Herring said.

Musician Dred “Perky” Scott has been a Rudolph friend and colleague for more than 40 years. They met when Scott, impressed by Rudolph’s trio at the Holiday Inn Town, asked to sing along. The tune that came to mind was “Bye, Bye Blackbird.”

“We immediately had a musical connection,” said Scott. “It was instantaneous.”

The pair has “grown together tremendously” over their 40 years through “the ups and the downs and the ins and the outs,” Scott said. “He hears what I hear before I say it, and I hear what he plays before he plays it. It’s unique and treasured.”

Scott added that Rudolph “has been able to accomplish what he’s done because he’s white, but that does not in any way dilute the importance of what he did.” Rudolph agrees.

“Absolutely,” he said. “Let’s face it. It is not a balanced street. Most all of my heroes and many, many of my friends are of African American descent. The contributions they made to the way I play and the way I am as a person are boundless. I owe a debt, of course, to the founders of this music.”

And, he adds, the “whole historical concept of the music” is steeped in African and African American traditions and culture.

“Without knowing the concepts of the blues and of African traditional music, I don’t think you’re much of a jazz player,” he said.

“When Steve talks about something that’s going on, people immediately listen,” he said.

“She’s been the ultimate support,” Rudolph said. “She really makes the bad days better. During the pandemic was probably the most wonderful time. Suddenly, I wasn’t working six nights a week, and we could see each other and maybe watch a television show together.”

Scott is among the musicians lined up for the Rudolph tribute.

“It’s a well-deserved honor because of his activism,” Scott said.

Throughout the region, Rudolph has created an unprecedented, jazz-nurturing collective of venues, “and to his credit, he never slid over to what they call ‘smooth jazz.’”

“He’s a good man,” Scott said. “He’s a righteous man who does his very best in everything he does and has been a friend to musicians in this area.”

Rudolph knows that landing in Harrisburg “was totally a fluke.” As for his legacy, the most rewarding thing “has been seeing the young players who grew up inspired by what I was doing or at least involved in what I was doing who went on to become amazing musicians and teachers.”

“The whole purpose of my involvement in this music is to keep it alive and hopefully encourage people to try to improve it and add their personality to the music,” he said. “Jazz sounds different from one player to another. It really is the ultimate self-expression.”

“This One’s for You! For All You’ve Done, For All You Do,” Central Pennsylvania Friends of Jazz tribute to Steve Rudolph, takes place Sept. 26 at 4:30 p.m. at Whitaker Center, Harrisburg. For tickets, visit
www.Friendsofjazz.org/Rudolph. Presenting sponsor: The Foundation for Enhancing Communities.