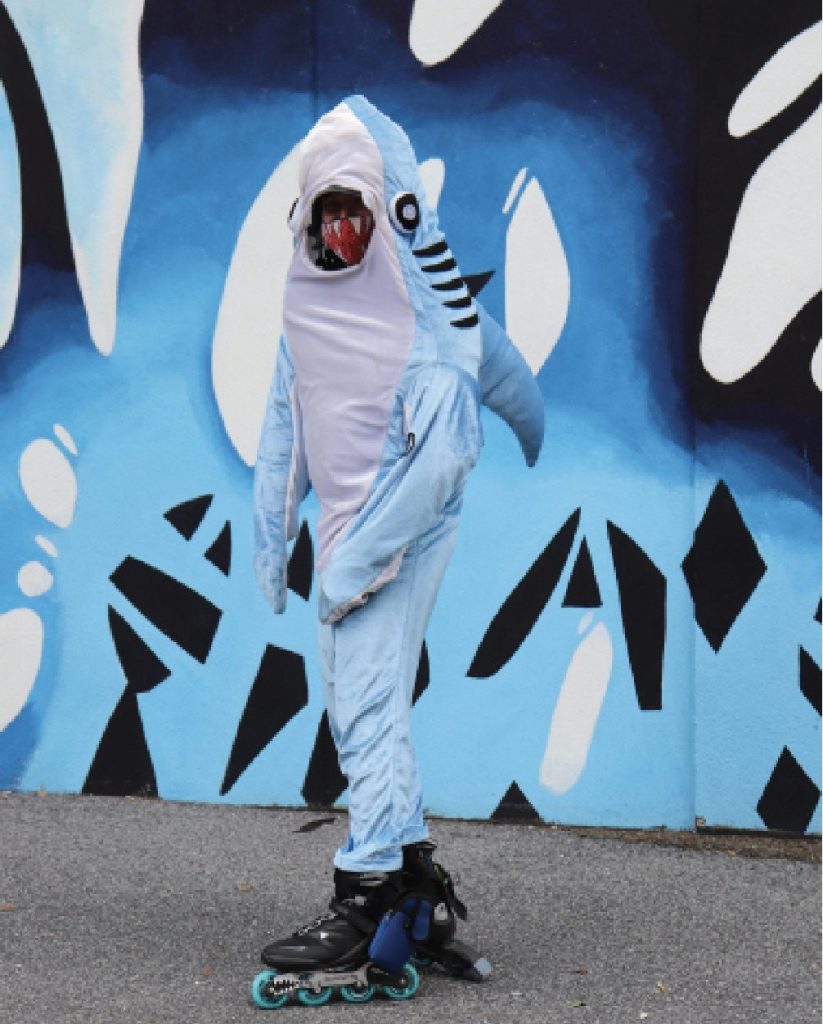 He was literally a fish out of water.

Throughout 2020, someone dressed in a bright blue shark costume roller-bladed throughout Harrisburg, primarily along the Susquehanna River.

“In the beginning, there was a lot of shock,” said Sharkman, of the initial screams and stares.

Those surprising and somewhat comical shark sightings gave way to smiles—no small task amid bleak pandemic days. His positive presence was like a lifeline.

It’s why, last June, TheBurg featured his photo on the cover, which contributed to both his stardom and enigma. Who was this lone shark? Our “cover fish,” interviewed a week later on “TheBurg Podcast,” said, “I’m not really sure who’s benefitting more—the people I’m trying to entertain or myself.”

Now, one year later, he sat down with TheBurg for a deeper reflection on his pandemic persona. And we found there’s a lot more to Sharkman than meets the eye.

Spoiler alert—he still wants to keep his identity anonymous. But we can tell you this much: “Sharkman Hbg,” as he’s known on his Facebook and Instagram accounts, is a 33-year-old Swatara Township resident who lives with his wife (occasionally spotted in a pink shark costume), two cats and Pomeranian. He’s an electronics technician who installs security systems. And he’s had a lifelong fascination with sharks.

“They’re amazing creatures—I went diving with them twice,” said Sharkman. “I just think they get a bad reputation—they’re misunderstood creatures.”

Just as sharks are considered outliers of the ocean, kids who grow up on roller blades are often perceived as counter-culture outsiders. Sharkman knows—he’s been skating since the age of 4 or 5. To him, the quirky hobby hits all the right notes.

“All the wonderful sounds from the wheels hitting different surfaces—I love that,” he said.

Last March, the pandemic provided the perfect storm of ingredients for this self-described “shy, practical joker” to become Sharkman.

“My smartwatch was asking me if I was OK, because I was coming home from work, doing nothing—I basically had six hours of inactivity every night,” said Sharkman. “Everyone was stuck inside, so I thought maybe I could entertain people, get some exercise at the same time, and the idea to become Mr. Sharky Shark went from there.”

Sharkman made his skating debut on April 10, 2020, by testing the waters in his neighborhood. Then he was ready for bigger, uncharted territory.

Initially, his motive was simply to lift people’s spirits. As his stardom grew, Sharkman saw another opportunity to do good. He created Sharkman-themed artwork, stickers and photo books—at his own expense—to give to fans in exchange for donations. But instead of pocketing the money, he had social media fans vote on which businesses should receive the proceeds, and several thousand dollars went into tip jars at Rubicon, Queen’s BBQ, Urban Churn and Alvaro’s.

As the weather warmed through 2020’s pandemic, more people ventured outdoors—and encountered Sharkman. Some of the top questions he received?

Can I take a picture with you? “Yes, always.”

Are you hot? “It depended on the day, but, honestly, there were more times I was cold than hot.”

What do you wear under your costume? “Wrist pads, shorts, a T-shirt, ball cap and helmet. I wash my costume after every outing … it was $50 on Amazon, and I don’t even know how to begin to leave a review for it.”

How fast do you skate? “Normally around 8 miles per hour. But during speed runs, I travel 14 miles per hour sustained for half an hour.”

Scariest moments? “I got bit by dogs twice on my knee—that was the worst. And I crashed three times last year, including straight into a wall near Knead, one of my favorite stops.”

Funniest moments? “There were so many, but the funniest was probably being netted by Jenny from J.B. Kelly at the Broad Street Market. She was apparently carrying a fishing net all day, waiting for me.”

Who are you? Why be anonymous? “I didn’t want any of the recognition to myself as a person. This was something I was doing for the city and to help businesses. I have a good paying job, and some people were really affected by the pandemic,” he said. “A lot of people wanted Sharky items, and I didn’t feel right charging—I never want money to complicate things—that’s not what Sharky is about.”

About 15 years ago, Sharkman’s teen years were rough. He endured bullying in high school. As he approached the age of 18, he had a vision to get his life back on track by attending HACC and pursuing a trade.

“Moving to Harrisburg and going to HACC saved my life—that’s the truth,” he said.

After earning two degrees from HACC, he decided to stay and make Harrisburg home. He kept a low profile—until he surfaced as Sharkman.

“As time went on and more questions were asked about Sharky—and I guess coming to terms with things in my own life—becoming Sharky became a tribute to my best buddy,” he said. “We skated together pretty much every day growing up. He ended up committing suicide two years ago. We were supposed to go shark diving together, but it never happened. It’s affected me greatly. So, it’s a tribute to him—being a shark, as well as skating, since it was his hobby as well as mine growing up.”

How did he turn something so painful into a positive?

“As tragic as it was, you still have to find good things to hold onto, and I think that’s what helped me,” he said. “Because of the popularity of Sharky over the summer, I didn’t want the perception to be, ‘He’s just using his friend’s death for his own gain,’—and I still don’t want to do that. I try to do what I can, with the means that I’ve been given.”

Sharkman has scaled back from his pandemic schedule of five weekly skates, but he hasn’t hung up his skates entirely. He makes charity appearances and organizes occasional group skates via social media.

The first time he asked skaters to join him along the river last year was “special.”

“That was probably the first time I skated with anyone by my side, since we—my buddy and I—skated together. My buddy would’ve wanted that,” he said.

Just as sharks are often misunderstood creatures, Sharkman hopes his story—and Sharky persona—ultimately helps others. This shark, it turns out, has a heart.

“It’s good for me to share these life experiences and be part of Harrisburg,” he said. “People want to know the story about the shark, whereas, as a person, they might not. Sharky is relatable.”