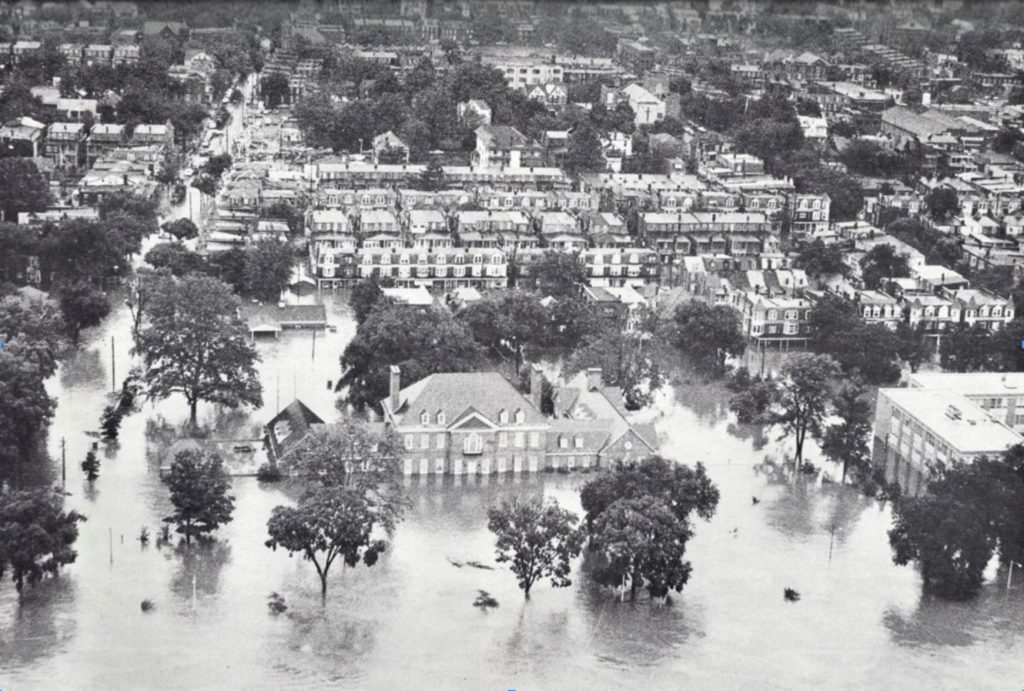 The Governor’s Residence and surrounding blocks of Uptown Harrisburg were among places where rescue by boat was necessary.

The rain had been coming down for three days, and the Susquehanna River kept creeping higher and higher.

Eileen Young was home alone in the orange brick house in the 300-block of S. Front Street in Shipoke that she and her husband Bob had lived in since 1969.

Bob was working in Wilkes-Barre, a city also getting pummeled by Tropical Storm Agnes.

“The river’s really getting high,” Eileen remembered telling Bob on the phone on that day in late June 1972. “It looks really bad.”

He kept telling her it would be OK, but then it got to the point when it wasn’t OK.

Their house was just across the street from the river, but the rising water from Paxton Creek, several blocks away, got to them first.

Eileen’s brother came to fetch her.

“At that point, there was not even any chance to save anything,” Eileen recalled. “Like an idiot, I put my curtains on the windowsill thinking that will save them. I grabbed what was essential like some insurance records”—and the family hamster.

Eileen ended up at her uncle’s house. Driving home from Wilkes-Barre, Bob couldn’t believe how far the Susquehanna River had spread onto the normally dry land. He drove all over Harrisburg in a Jeep to all the evacuation points he could find, eventually tracking down Eileen.

On June 24, the river crested at 32.6 feet, breaking the previous record of 29.2 feet set during the 1936 flood. Flood stage for the Susquehanna at Harrisburg is 17 feet.

Eventually, the river receded enough so they could return home.

“We walked in the front door of our house, and it was just like somebody dumped tons of chocolate pudding everywhere, but it didn’t smell that good,” Eileen remembered.

Water had risen to 8½ feet on their first floor, which was “annihilated.” Pieces of their furniture had floated up the steps.

At first, the city wanted to bulldoze everything, their house included. The Youngs and other residents of Shipoke fought back and convinced the city to allow them to rebuild and restore.

They didn’t have flood insurance, almost no one did, Bob said. With their own money and a low-interest, federal loan, the Youngs moved back in and restored their home over the course of about a year.

The Youngs’ experience was just one story of what happened throughout Harrisburg in the wake of Agnes, considered at the time the greatest natural disaster ever in the United States.

Thousands of residents and business owners lost much, if not everything, in the flood. Some left the city forever; others vowed to rebuild.

Now, five decades later, the Historic Harrisburg Association (HHA) is devoting the entire month of June to what it calls a “Celebration of Resolve” to commemorate the 50th anniversary of Agnes.

It’s not really about the numbers: 15 inches of rain fell in three days, property damage totaled $3.5 billion, and 118 people died along the storm’s long destructive path. This data has all been cited repeatedly. The month-long commemoration is about something else, said David Morrison, HHA executive director.

“The story of the recovery and the resolve to recover from Agnes is really what the theme of our activities this year are all about,” he said. “We’re not going to get carried away with how high was the water, and did [Gov.] Milton Shapp really get evacuated in a motorboat. That has been covered over and over again.”

Agnes is worth remembering because it was such a “turning point” in Harrisburg, Morrison said.

Harrisburg was in decline in the 1960s, with people fleeing the city for the suburbs. Following Agnes, the destruction was such that some observers even called for relocating the state capital.

But the calls to write off Harrisburg ran head-on into what Morrison termed a “grassroots urban pioneer reaction”—people like Bob and Eileen Young, who resisted having their homes torn down against their will.

The city agreed to allow people to fix up their houses. In other cases, the city sold homes it acquired for $1,000 or less, under the condition that the new owners commit to fixing them up and living in them, Morrison said.

The massive amount of rebuilding and restoration led to the creation of neighborhood organizations in Shipoke and Midtown and, ultimately, to the formation of the Historic Harrisburg Association itself.

Morrison also credits Agnes with leading to the creation of historic districts in Harrisburg, which now total 11.

Agnes changed the path that Bob and Eileen Young were on in their lives.

“We probably would have moved somewhere else,” Bob said, had it not been for Agnes.

Instead, the couple became more involved in the city and with Historic Harrisburg.

“I got on the Planning Commission,” Bob said. “It sort of tied us to the city after we went through all of that.”

After rebuilding, the Youngs stayed in their home in Shipoke until about 2005, when they downsized to a row house in the 200-block of Herr Street in Midtown.

To Eileen, Agnes was a devastating experience, yet, in the end, a positive one.

“Our neighborhood grew out of that,” she said. “People became much closer. We now had a common goal to bring our neighborhood back. You can see that, after 50 years, it’s a great place to live.”

This month, the Historic Harrisburg Association will hold several events, together called “A Celebration of Resolve,” to commemorate the 50th anniversary of Agnes.