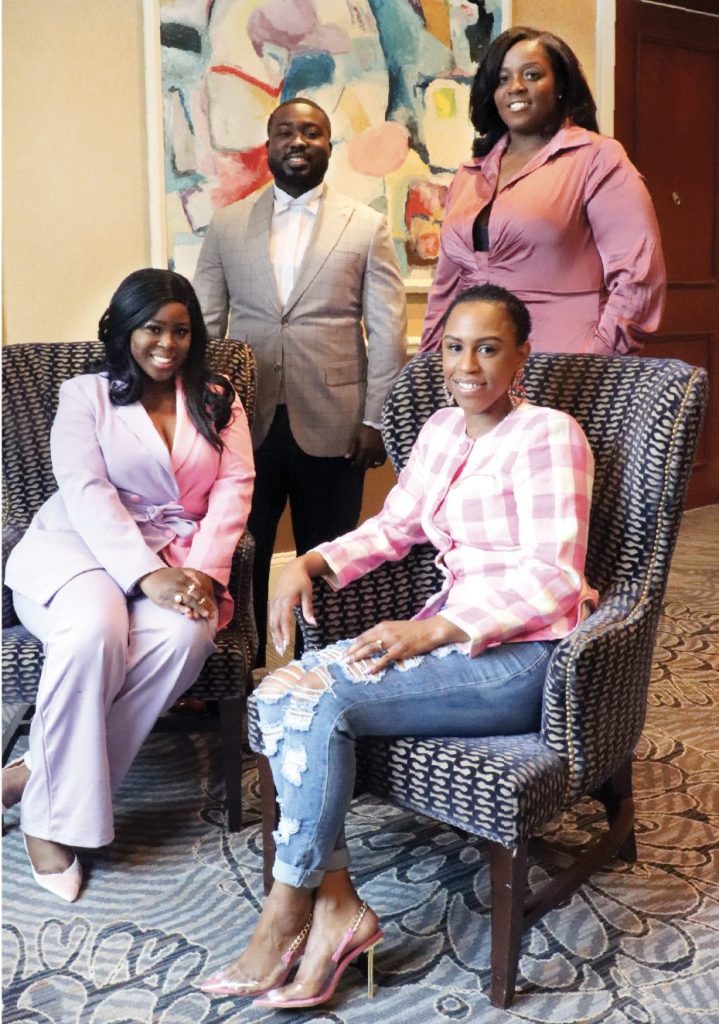 Jaylene Crawley remembers getting her first American Girl doll at 8 years old as a gift from her mom. It was an expensive purchase for a mother of four kids, but she saved up, and the two squealed with joy when the doll arrived in the mail.

Crawley was into fashion even as a young girl and couldn’t wait to dress up her doll. But she knew that her family wouldn’t be able to afford extra outfits for it. Instead, she taught herself to sew, picking up tips from her aunt. For hours, Crawley would sew by hand in her room, crafting little dresses for her doll.

She recalls a time when she got caught sewing in class at school. Instead of punishing her, her teacher, Mrs. Cooper, held her after class to give her a sewing machine.

“That’s what jump-started everything,” Crawley said.

These days, she’s still making dresses for American girls, but this time they’re real-life ones. You might see a few of these young women showing off her work this month, as it is prom season.

Crawley is one of several Harrisburg designers working behind the scenes to make local students stand out in their gowns and tuxes for that special night of the year. Chances are, if you’ve seen the pictures of bright, flashy, extravagant prom attire, you were looking at the handiwork of one of these local fashion gurus.

Crawley designed her first prom dress for a client in 2007. For the first few years, she stuck to creating one dress a year for prom. But over the years, that number rose to as high as 21 for a single prom season.

Depending on the gown, it can take anywhere from a few hours to weeks to design and sew a dress. She described herself as a designer as “avant-garde,” which “means over-the-top in fashion,” she said. Crawley explained her work as wearable art. And there’s no better example than her money dress.

“I want to look like a million bucks…literally,” a former prom client of Crawley’s explained to her.

Fifty-five hours of work and many stacks of fake money later, and the student was walking into her high school prom covered in cash. It didn’t take long before the dress went viral online.

“Just to see the girls light up makes my day,” Crawley said.

During the sometimes stressful and taxing season of designing, Crawley is grateful for her support system—her “sew sisters.”

A handful of years ago, she met two other Harrisburg designers, Keya Wilson and Satin Monroe. They instantly clicked and, since then, have leaned on each other with encouragement, questions and, when needed, by lending an extra zipper.

“Everyone can succeed, thrive and still help each other,” Crawley said. “We don’t need competition. No one takes from the other. We all want to see each other do well.”

While the “sew sisters” get the ladies ready for prom, Kevin Berry of Covered By Style and Grace is making sure all the guys look just as fly.

“When you dress good, you feel good,” Berry said.

While Berry always had a “passion for fashion,” as Kanye West, his fashion role model, said, it wasn’t until a few years ago, after a job loss, that he could finally make that passion a business.

His style has remained the same over the years. It’s sophisticated and elegant, but often with a unique touch. He remembers his own prom experience, when his dad took him to get his first custom suit in Philadelphia. It was inspired by, of course, Kanye. Berry would still wear that suit, if it fit, he said. It still hangs in his closet—off-white with a bright pop of coral pink.

Now, like his dad did for him, he makes other young men’s fashion aspirations come to life. He’s worked with clients from Bishop McDevitt, Harrisburg High School, Susquehanna Township, Milton Hershey and Lower Dauphin, among other schools.

He has also partnered with the “sew sisters” on prom pop-up shops, and it’s not uncommon for one of his clients to be headed to prom with one of Wilson’s clients. They’ve created a few matching prom looks.

While he hasn’t yet mastered tailoring, Berry designs all the suits and works with local Giovanni’s Tailor Shop.

Prom was something that Tumer thought about since she was a little girl. Once she was in high school, she planned for the big night for over a year.

“I didn’t want a dress that looked like anyone else’s in my school or in the area,” she said. “I wanted to look different.”

When she approached Wilson, who owns Pieces of Me, a design business, Tumer was unsure if Wilson would be able to make her vision come to life. She envisioned a dress adorned with tiny mirror pieces and rhinestones. It wasn’t easy, but what’s Wilson if not the fairy godmother of prom dresses?

“It was the best dress of the prom,” Tumer said, without hesitation.

When you commission Wilson to make a dress, you don’t just get the dress, you get a whole experience. She’s constantly communicating with you during the design and fitting process and will often personally come to your house on prom night to make sure you’re ready to go.

“The best part is, when it’s complete, and you see them dressed up and they’re so happy,” she said. “It’s really rewarding.”

Like Crawley, Wilson is largely self-taught in sewing. What began as a way to make unique clothes for herself grew exponentially once people started asking for custom pieces from her.

Handling the volume of dresses that she works on each year is a challenge—she once sewed her fingers together—but it’s worth it.

“It can be stressful, but I never get tired of it,” she said.

While “sew sister” Satin Monroe had training in fashion design, it wasn’t until after she gave birth to her daughter that she really got serious about it. She needed some extra income and decided to sit back down at her sewing machine.

“My daughter was my inspiration,” she said. “It made me fall back in love with being creative. Taking a chance on myself led me to where I am.”

Now, she designs a minimum of 20 gowns each prom season. She hopes, one day, to design a collection of gowns and to hire some staff members to help with the workload.

There are a lot of hours, thread and sequins that go into prom outfits that turn heads and make the newspapers. There’s also a lot of passion and heart for the clients that the designers are dressing.

While custom designs can be expensive, Berry works to make sure his tuxes and suits are still affordable.

“I want everybody to have the opportunity to dress well,” he said.

Wilson also caters to those who may not be able to afford a custom gown by designing and giving away a free dress to one student each year.

Diamond Thomas, who attended Central Dauphin East High School, was one of these recipients. After Wilson heard of Thomas’ struggle with chronic pain, she decided to give her a special prom experience.

Not only did she make her a custom dress, but she paid for her hair and makeup to be done and came to her house to help her get ready.

“She worked her magic,” Thomas said. “It was a rough year, so it was like a weight lifted off my shoulders. I will forever remember that experience.”

When Wilson and the other designers are stressed, working long nights to get all of their prom orders finished, these reactions keep them going. It’s about more than a gown or tux. It’s the business of making people feel good, making them happy.

“In the end, it’s the smile that keeps me going,” Crawley said.

Jaylene Crawley, Keya Wilson, Satin Monroe and Covered by Style and Grace by Kevin Berry all can be found on Facebook.