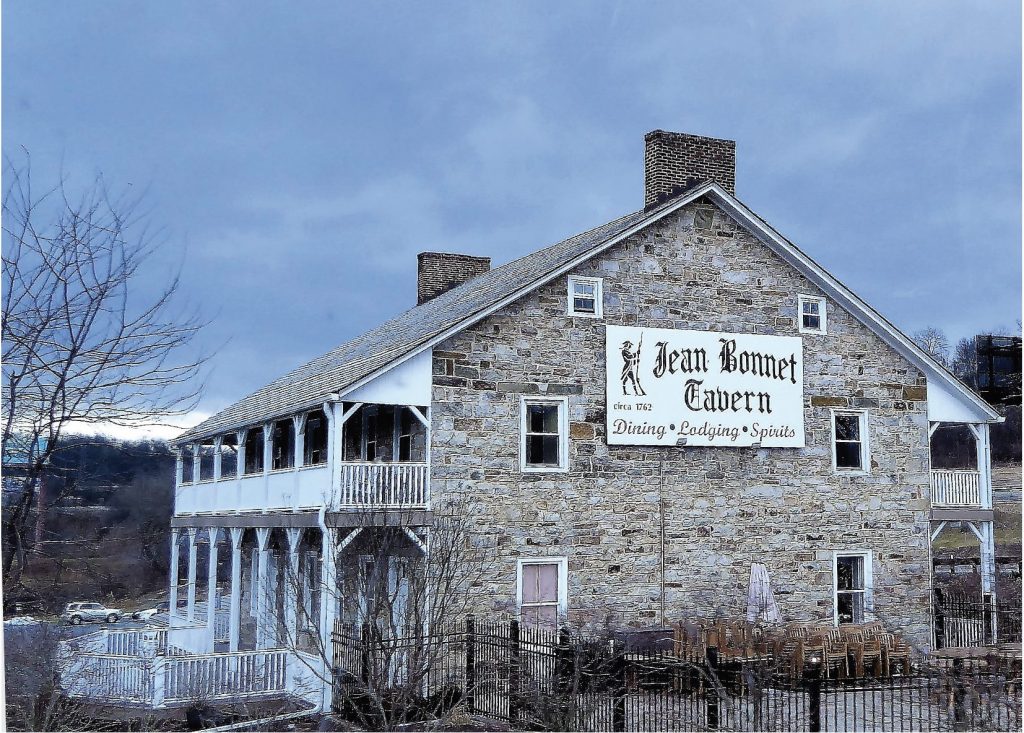 Samuel Johnson, author and writer of “A Dictionary of the English Language,” once said, “There is nothing, which has been contrived by man, by which so much happiness is produced as by a good tavern.”

Today’s taverns may still be sites of much merriment, but few can lay claim to being an incubator of insurrection and fewer still are standing to tell the tale, which is what makes the Jean Bonnet Tavern in Bedford so special. If you’re a history lover who is aching to take a road trip, you can visit the Jean Bonnet on less than a tank of gas.

Built in the 1760s and situated along the Lincoln Highway, the historic structure of cut fieldstone welcomes guests with a marker detailing its rich history. The earliest, official property records show a transfer of 690 acres from the William Penn family to a land speculator by the name of Hans Ireland. In 1762, Ireland transferred the property to a trader named Robert Callender. Callender, a Carlisle native, served as a scout for Gen. George Washington.

The structure was a welcome respite for settlers who made their way west in wooden wagons. Early on, it served as a French fort and trading post. In 1779, Jean Bonnet and his wife Dorothy purchased the property, which was issued a license as a public house shortly thereafter.

After the Revolutionary War, a notable uprising occurred that would cement the tavern’s place in history.

An attempt by the new federal government to impose an excise tax on whiskey was met with resistance. The tax was part of Alexander Hamilton’s plan to help pay down the large national debt caused by the Revolutionary War. The move to implement the first tax on a domestic product enraged farmers, who often distilled their surplus grain and corn into whiskey, which they then used for bartering purposes.

To show their displeasure, a disgruntled group congregated at the tavern and hoisted a “liberty pole,” which was known as a common form of protest during Colonial days. George Washington, in an effort to quell the rebellion, gathered together a group of militiamen. He set up his headquarters at the nearby David Espy House (located in modern-day downtown Bedford), and his troops camped outside of town at the Jean Bonnet on their way to Pittsburgh in 1794.

Since then, the property has changed hands many times. Although records show that it’s most often been maintained as a tavern and inn, it’s also on record as having been used as a private residence. In 1979, the structure was added to the National Register of Historic Places.

Many of the features you see today, from the tavern’s 2-foot-thick stone walls to its impressive fireplaces and chestnut beams, were constructed while Callender owned the property. Brandon Callihan, a Bedford native and Culinary Institute of America graduate, worked at the Jean Bonnet before assuming ownership in June 2017.

Little has changed in recent years, and that’s by design, according to Callihan. Guests still dine by candlelight in a Colonial atmosphere where the food is served on pewter plates and homemade quilts adorn the walls. During the winter, roaring fires are lit in each dining area to keep guests warm and cozy as they dine.

Customers who prefer a more casual atmosphere can climb the steps to the spacious dining area on the second floor, which features an oversized bar, an additional fireplace and roomy wooden booths.

Craig Nye of Mechanicsburg has stopped a few times for lunch at the tavern while visiting the area and has enjoyed sandwiches, burgers, onion rings and their popular onion soup.

“The food is good, and the candles on each table are a nice touch,” he said.

Nye said that he found the history of the tavern and its role in the Whiskey Rebellion intriguing, not to mention the tales of resident ghosts.

“The place is said to be haunted,” he said. “I hear that ghosts appear in the bar overnight.”

Located just a few steps from the tavern is an authentic log cabin crafted in the 1700s, which now operates as “The Cabin Shoppe.” The structure was moved from Fayette County to its current site in 2005 and features items made by local artisans and other unique gifts.

The Jean Bonnet Tavern also features overnight accommodations. All four rooms have access to the commodious balcony porch, replete with rocking chairs to relax and take in the view of the Allegheny Mountains.

Callihan said that he enjoys seeing the smiles on the faces of guests who visit and is proud to play a part in the history of hospitality that has been a tradition throughout the ages.