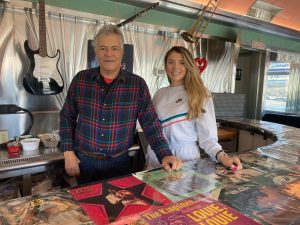 “Just write: ‘Harry’s is back—be careful what you wish for,’” Lou Vazquez told me as I interviewed him and his daughter in their new Harrisburg restaurant.

A previous co-owner of the former Harry’s Tavern, a popular Harrisburg bar that operated from 1949 to the early 1990s, Vazquez wants to bring back a piece of the good old days with his new restaurant, Harry’s Bistro, located on Herr Street near the Susquehanna Township line.

In a shiny silver and green restored trailer diner, Vazquez gives patrons a retro experience. Guitars, trumpets and cymbals hang on the walls, and record albums decorate the counter and each tabletop.

But this go-around, Vazquez has a new partner in business—his daughter. Anna Vazquez is hip to her dad’s vintage theme but realizes the old must be balanced with the modern. If her dad wanted to also attract a younger crowd, Harry’s would need some updates.

Anna set her dad up with an Alexa device so that customers can request music. But he will still get his old-fashioned feeling with a jukebox that they plan to install in the dining room.

The food is a best-of-both-worlds situation, as well. The menu lists classics from the old Harry’s Tavern: cheese fries, sausage with honey and spicy shrimp, but with Anna’s additions, including avocado toast.

The menu is intentionally simple, compared to many sprawling diner menus. Anna said that they are focusing on quality over quantity and want to keep the menu in line with the modern feel they’re aiming for.

“I know what’s trending,” said Anna, who is also the marketing director at XL Live, a concert venue in Harrisburg. “He has the older mindset, and I have the younger mindset.” Once statewide COVID restrictions are lifted, Vazquez hopes to have live music nights at Harry’s. He wants to make it a place where people hang out, listen to music and talk (but not about politics)—much like the old Harry’s Tavern.

According to Vazquez, who owned Harry’s Tavern for the last few years before it closed, it was a Harrisburg hotspot. The neighborhood bar in Allison Hill, started by Harry and Mary Touloumes, drew state workers and local “big wigs” for their steaks and fishbowls of beer, he explained.

Vazquez sees his new venture as bringing Harry’s back to life. Once others hear that it’s back, he believes that the same energy that filled the once-bustling tavern will pack the bistro, too.

Anna sees a similar picture, but with a younger crowd mixed in.

“This is a fun place where people can come listen to music,” she said. “They can come here for good vibes.”

Vazquez bought the building before the pandemic started and planned to open sooner, but COVID changed his plans. Like many other restaurant owners, he had to adapt to the new reality. Still, the father-daughter duo is excited for their future.

“Right now, it’s different for a lot of restaurants, but we are really optimistic about what’s ahead,” Anna said.