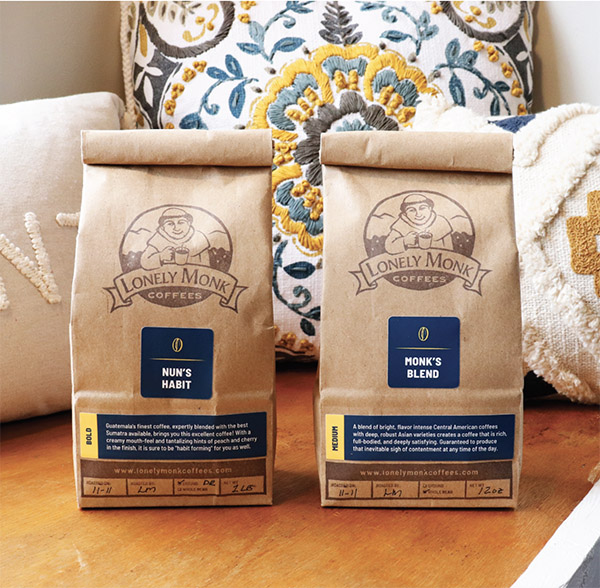 “It’s been a long journey for me.”

That’s how Josh Willits characterizes his unlikely road from globetrotting engineer to the owner of Lonely Monk Coffee, a new coffee roaster shop in Lemoyne.

But, for Willits, it’s also been a long taste journey, which included stops along the way through the “big three” of mass production to-go jolts: McDonald’s, Dunkin Donuts and Starbucks.

At one point, he tasted some truly spectacular coffee and instantly saw the benefits of fresh-grinding his own beans. When he began to travel internationally for a private equity company to the French Alps, Amsterdam and the United Kingdom, his coffee palette became even more refined.

Then about 14 years ago, Willits met Leon Miller, the founder of Lonely Monk Coffee in Lancaster and still its brewmaster. Miller, a Mennonite minister, also had seen the coffee light while in Europe and, upon returning, had made it his mission to recreate that fine flavor in the United States.

In fact, he became such a fan that, earlier this year, when Miller began inching toward retirement, driven by the pandemic and health issues, he bought out the operation and moved it to Lemoyne.

The Lonely Monk baton was passed. Happily, Miller remains the roastmaster at Lonely Monk, named because, like Willits and Miller, monks are singularly devoted to a cause.

“I was definitely excited to bring this to the West Shore,” Willits said.

Lonely Monk Coffee has been served in Lancaster for about 15 years. Caffeine lovers still can buy it at Pop & Perk, Lancaster Sweet Shoppe and Rachel’s Crêperie in Lancaster.

With catchy options like Nun’s Habit and Holy Grounds, the coffee also can be ordered online for $14 for a 12-ounce bag.

Lonely Monk employs fluid bed roasting, which, according to Willits, offers a smoother flavor in contrast to the more-popular drum roasting method.

“It’s all very artisan for us,” he said.

Lonely Monk is not a sit-down or quick-serve coffee shop, though it may turn into one in the future.

The site, on Herman Avenue next to Grace United Methodist Church, was once Asana, a lime-green yoga studio that closed in July. In less than a week, it was transformed into a cozy home of hardwood, stained glass, stainless steel, lush green plants, statement pillows and pithy coffee-quote plaques for once-a-week private tastings of the aromatic roast. It also serves as home base for local deliveries.

Red and white plastic drums at the front of the shop and a large metal roasting machine are the heart of the operation.

Willits still works full-time for a web company. His wife, LaShae, a schoolteacher in Mechanicsburg, helps, as do his two kids, ages 12 and 8. They all assist in packaging the beans and delivering. His dad helps, as well.

He offered a private tasting of three cups—one each from Peru, the Costa Rica/Guatemala region and Ethiopia, where coffee originated. His tastings become upper-level courses in all-things coffee.

For his tastings, the coffee has a thick crust that looks like browned crème brûlée. When the crust is broken with a spoon, Willits encourages patrons to dip their head down to drink in the aroma.

Slurping is encouraged, he said, because it wets your whole palette.

Part of Willits’ coffee course includes recounting the tale of St. Vitalis, a monk in Alexandria in the 600s who was reviled for patronizing brothels. However, after his murder, it was discovered that he was really entering the brothels to pay the women to stay off the streets. That story lies at the heart of his social consciousness, as he quietly helps others.

Willits said that, this month, Lonely Monk is supporting Polaris Project, a national nonprofit that runs a human trafficking hotline.

He hopes that you will join him in his good works and in indulging your, um, habit, making Lonely Monk part of your daily devotions. Amen.