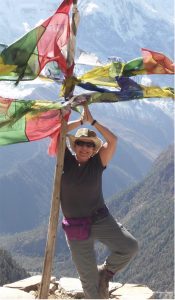 “First you make a decision,” a friend once told Tracy Pawelski. “Then you make it the right decision.”

Tracy’s “One Woman in the Himalayas” chronicles that figurative journey by way of a real journey along Nepal’s Annapurna Circuit, a rugged trek leading through Hindu lowlands and Buddhist highlands. Tracy made the decision to hike Nepal, and even when the trek doesn’t go as planned, we meet her adapting and crafting a journey of discovery—discovery of a world of wondrous beauty and inner strengths.

Readers of Tracy’s “One Woman’s Camino” know she doesn’t shy from exploration. Adventure travel, she has learned over the years, transitions her from one phase of life to the next. She has explored Mayan ruins as a young woman between career moves. She found spiritual growth she didn’t know she was seeking on Spain’s El Camino de Santiago pilgrimage.

Tracy, a Harrisburg area resident, has also braved the wilds of political and corporate America (and in case you ever need guidance on how a grocery chain responds when a black widow spider appears in a customer’s grapes—well, Tracy is your woman).

But the joy of Tracy’s journey is her willingness to peel away the veneer from the confidence that an American woman—careerist, wife, mother—must project in a world where the survivors are the winners. Did she make the right decision to fly to Nepal? It made sense at the time, and even as worries crept, she stayed true to her instinct. Was this the golden ticket to the mysteries of her soul? The opportunity presented itself, so she seized it.

Readers take a difficult journey with Tracy. Difficult physically. Difficult mentally. Trademark touches of humor help lighten the load. Women, she says, are “naturally gifted decision-makers,” tasked daily with mundane decisions on what to wear for the big pitch, how to get a healthy meal on the table, when to call mom. Most “are made in a split second. No second-guessing. No gnashing of teeth. Well, except for what to wear.”

Relatable moments such as these keep us trekking with Tracy. She gives us the Nepal of earthquakes and snow squalls and monsoons and political dysfunction. She also gives us the Nepal of hospitality and service and children whose smiles brighten the days. “Despite daunting odds and demoralizing conditions, the heart-warming, positive spirit of the Nepalese people is what you see first and what you remember last,” she writes.

Tracy shares snapshots of Nepali life. Schoolchildren climbing down from the roof of a bus, their uniforms immaculate. Hindu funeral pyres cremating the dead. Sipping a beer in a touristy watering hole called the Jesse James Bar. Waiting to catch a glimpse of the Kumari, or Living Goddess, a sequestered young girl chosen to imbue blessings and predictions—but only until she has her first period.

Leaving rigidity behind serves Tracy well. Her journey is beset with troubles. After one betrayal, she has to “swallow a heavy dollop of suspicion; it tastes like vinegar in my mouth.” Each setback presents a new decision point. She assesses her ability to endure, often thinking on her weary feet. Every time it seems she should turn back, she plunges forward. “I didn’t come all this way not to adapt to a new set of circumstances,” she says at one crossroads.

Amid wondrous waterfalls and spectacular mountain overlooks, the stoicism and humor she learns from a pair of British trekkers comes in handy. After spotting langur monkeys deep into one day’s trek, she asks her guide, Ram, how long until they reach the next village. The heart-sinking answer: Two more hours.

“While Ram doesn’t always give me the answer I am hoping for, he does his job so that I can do mine: pace myself and get my head in the right place so that I can mentally prepare for what lies ahead,” she writes.

Whether she is in corporate America or the mountains of Nepal, Tracy does her job. Reminding us that adventure often comes with a large dose of drudgery, she shares her mind trick for ascending mountains in the celestial altitudes, concentrating on nothing but the moment as she coaxes her body onward. “One foot. Next foot. Repeat.” She is rewarded by the panorama of the Himalayas from the top of the summit.

Tracy manages to find that no journey worth the having follows a straight line. When she finally hangs a string of Tibetan flags over a glacier to mark the journey’s end, she takes a moment to say a prayer of thanks. She remembers the Buddhist monk who blessed the flags and wonders “if he threw a few detours into my journey to test my resolve. If so, he certainly succeeded.”

Maybe it’s not blessings Tracy leaves Nepal with, but forgiveness—above all, self-forgiveness when things don’t go as planned. Learning how to live with your decisions, she realizes, is better than beating yourself up for mistakes. Maybe she wasn’t quite ready for this test, but that was OK.

“If you wait until you think you’re ready,” she says, “you may never act.”