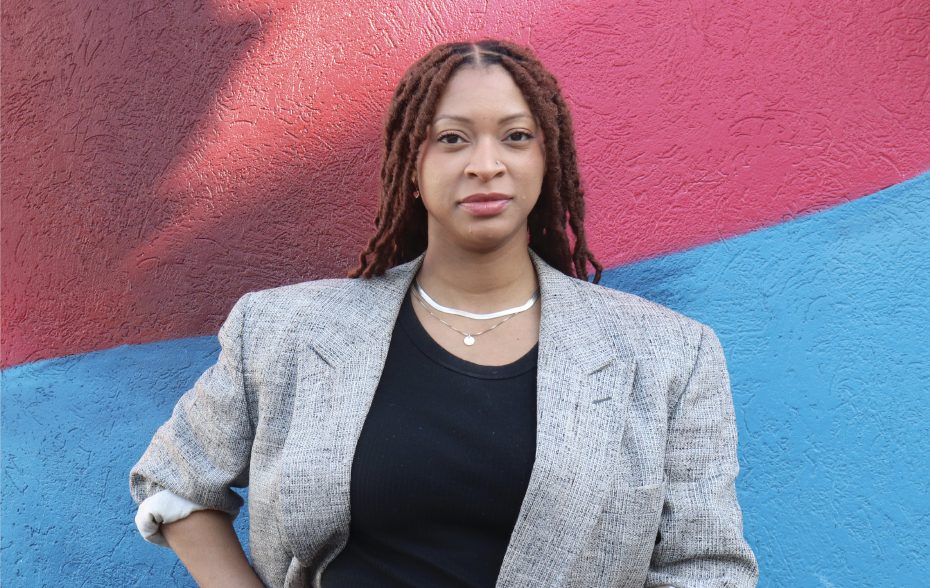 Picture this. A poet finishes reading her newest work in a dimly lit basement. The audience doesn’t snap, as is customary for these kinds of gatherings, but just claps. Revolutionary. It’s almost poetic in itself.

The not snapping, the plastic-cup-of-alcohol drinking, the incense burning—it all sets the scene for Thursday nights at H*MAC in Midtown Harrisburg.

On my right sits a guy in a hoodie and trucker hat, on the left, a young woman in a cheetah print dress and cheetah print jacket, and across the room, an older man in a matching set—fur hat, fur coat and fur leg warmers. 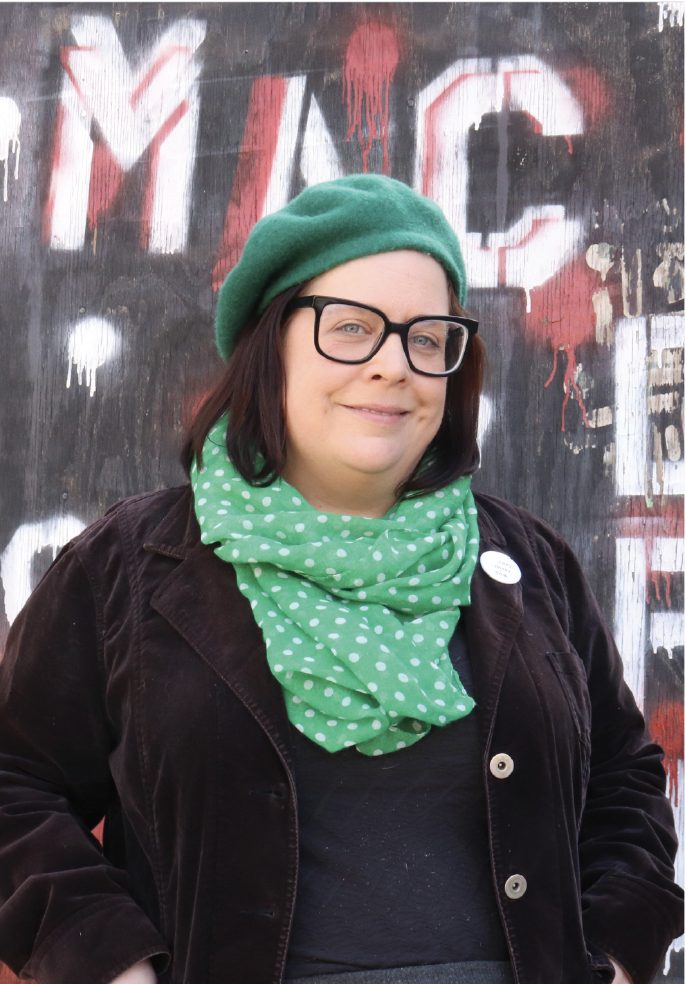 The self-professed “leader of this ragtag group,” Amy Trout, steps onto the stage in her pink beret hat. She recites a poem that starts out about men bothering women at a bar and ends with the scathing realities of sexual assault and its victims who aren’t always believed. She speaks intentionally fast and passionately. And then, ding. She taps the bell on the string-of-lights-wrapped podium, signifying the end of the poem.

Ringing the bell is one of only two rules of the poetry-reading group. The other is that you can’t apologize. Throughout the night, only one person slips up on that rule, and the group catches it. Lastly, the readings are uncensored—a fact that the group seems to take pride in, that you can get on stage and say whatever you want. You have a captive audience.

These are the Blacklisted Poets of Harrisburg, a group that Trout formed as a continuation of the former Almost Uptown Poetry Cartel, which ended in 2021 when its organizer retired.

One thing I learned from the Thursday night reading was that poetry takes many forms and is very diverse in its expression. That’s something you’ll see evidenced in the Harrisburg poets featured in this story. However, poetry seems to serve mostly the same purpose for writers—it’s therapy. And after the past few years that we’ve had, who couldn’t use a little therapy?

Thursday night’s poetry reading covered every topic—the backstabbing ex, the loss of a loved one, the love affair and entitled men. Ding. Also mental health, science, pregnancy and God. Ding. Then some that either I wasn’t artsy enough to comprehend or just didn’t quite make sense. Ding.

Anthony Honorowski, aka hoodie guy, was the third to step on stage after science poems guy.

“When you come here, you can let it out and express anything you want,” Honorowski told me earlier that night.

That hasn’t always been his experience, he explained, especially during his time in the military.

At the reading, he shared a poem about a girl who he met in a psych ward.

Honorowski, now an EMT, has seen how the pandemic has affected mental health—it’s affected his own. What was already an issue for him, caused him to spiral during COVID. But through the poetry group, he found release.

“It was a very liberating experience,” he said of his first time reading in front of the audience.

Erika Eberly has had a similar experience. She’s been part of the poetry group since 2017, when it was still the Almost Uptown Poetry Cartel, although she’s been writing since she was 7.

“Poetry has always been a way of getting something out there,” she said. “It’s cathartic, releasing and healing.”

Eberly is also a local actress and has performed with Harrisburg’s Narçisse Theatre Company. But there’s something about the vulnerability of poetry that allows her to fully express herself, she said.

“I always tried to put on a happy face,” she said. “But it’s good to lay yourself down naked sometimes.” 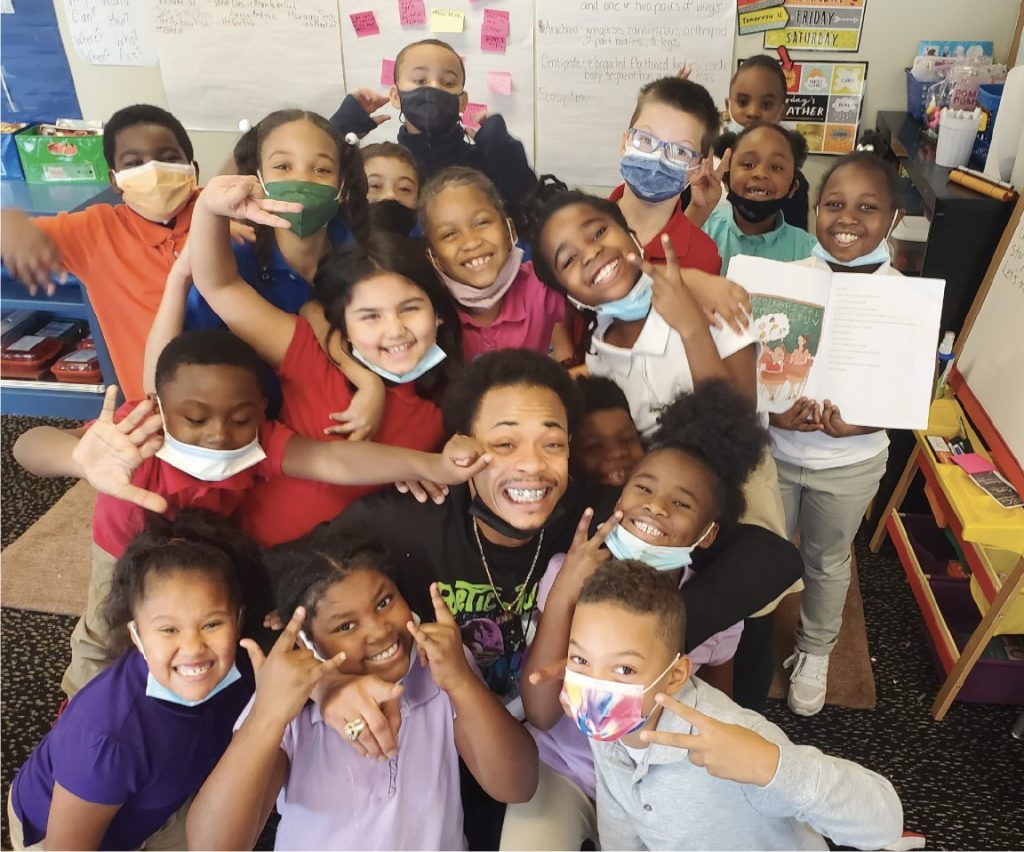 As opposed to the Blacklisted Poets, oftentimes, Harrisburg-native Julian “Juelz” Davenport’s one rule is to censor when reading poetry. It makes sense since he’s regularly reading to young, impressionable minds at local schools.

Davenport has published several poetry books that share his experiences growing up in poverty, witnessing violence and spending time in prison, among other things. He writes to heal himself, but also to help those in the same situations that he once was in.

“I don’t want the kids to go through what I once went through,” he said. “I wish I knew then what I know now.”

“What I’m teaching them is to take what’s inside them and to bring it out,” he said. “I didn’t know how to place my feelings when I was younger. A lot of them are experiencing the same things.”

Davenport even wrote a poetry book specifically for children that encourages kids to have dreams, to stand up to bullies, and accept their peers despite differences.

Davenport has big plans for his poetry and brand, IME Vision, with new books on the way and plans to continue teaching poetry classes to adults and students.

But it all started when he first put pen to paper, as a young man writing letters to his father in prison.

Basil “BooBee” Talib had a similar experience of writing to incarcerated family members.

The Brooklyn, N.Y., native had a rough childhood, he said. His mother died when he was 5, and he never really knew his father.

Talib’s “Aunt Easy” raised him, cared for him, and taught him how to face his fears, he said. She also taught him street smarts: never touch someone’s food, money or girl. Those come in handy, he said.

In his youth, Talib fell in love with the works of writers like Langston Hughes and Malcolm X. They sparked something in him, and he began to write poetry himself.

“I felt like that was the only person that listened to me—that paper,” he said.

When Talib was incarcerated, he continued to write, sharing spoken word poems with other inmates and writing for the prison newsletter.

“In my poems, I share things that I would’ve never shared,” he said. “Without poetry, I would be a ball of rage.”

These days, Talib is a single dad of two sons and coaches their basketball team at the Camp Curtin YMCA in Harrisburg. He has written eight poetry books and speaks at churches, retirement homes and nonprofits, among other places. He has also participated in the American Literacy Corp.’s “500 Men Reading” event. And if you ever ride the public bus in Harrisburg, you might find one of Talib’s poems resting on a seat. He tends to do that, his son Zahkee told me—carry a bunch of print-outs around in his backpack, leaving one here or there for someone to find. Talib just wants to inspire.

“I’ve done so much negative in my life, but why can’t my legacy be positivity?” he said. “When I talk to people, I want to make a lasting impact.”

Back at H*MAC, the bell dings again. One poet leaves the stage, making room for Taylor Lagyak. When she first joined the group, she had just given birth to her first child and needed a creative outlet. The first time she read a poem, she spoke fast—she was nervous. During a critique group, the other poets advised her to slow down, that they couldn’t understand what she was saying.

But she’s come a long way. On Thursday night, she recites her poem, “I Don’t Need No Hype Man.” It’s all about confidence.

American poet Marianne Moore once said that “poetry is the art of creating imaginary gardens with real toads.” What has inspired a lot of the Blacklisted Poets, as well as Davenport and Talib, is real pain, mistakes and trauma. It’s even what brought most of them to poetry in the first place. But through poetry, on their terms, they’ve turned those toads into gardens.

A selection from Davenport’s poem, “Young Entrepreneur,” exemplifies this:

Something in us sets us apart from the rest.

Ambition is key to the ignition for what beats in your chest.

thought up by you.

I dropped this little note to keep you on your path.

Be persistent, create your own thing and make it last!

For more about Julian “Juelz” Davenport and to purchase his books, visit www.iamjuelz.com. To contact or book Basil “Boobee” Talib or purchase his books, email him at basiltalib@gmail.com. For more information on the Blacklisted Poets of Harrisburg, find them on Facebook.