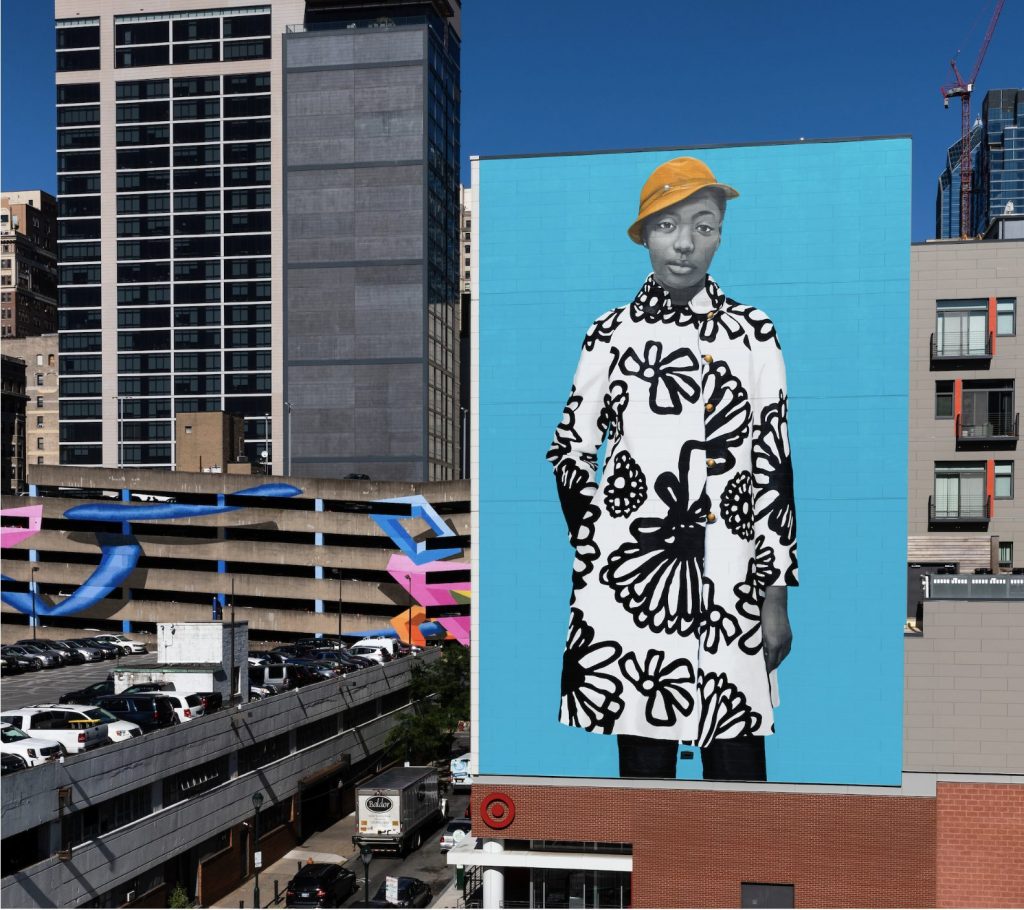 Chances are, when you think about Philadelphia, certain icons come to mind: Independence Hall and the Liberty Bell, soft pretzels and cheesesteaks. You may even hear a strain of the theme song from “Rocky.”

But there’s one more colorful symbol to add to the list: murals. The organization Mural Arts Philadelphia is considered the nation’s largest public art program, credited with creating the world’s biggest outdoor art gallery—with a tally over 4,000.

“It’s a visual treat to come into the city and see the diversity of the City of Brotherly Love reflected back,” said Chad Eric Smith, Mural Arts’ director of communications.

Murals with a Message

There are even murals in nontraditional or unexpected places.

“A Love Letter for You: Brick Valentines on the Philly Skyline” is a series of 50 rooftop murals best seen by elevated train. Created as a collective, giant love letter, the murals’ words are not only from a guy to a girl, but from an artist to his beloved hometown. That artist is Philadelphia native Steve Powers, who also created one of Harrisburg’s murals.

Smith led me to a Center City underpass where two “Point of Triangulation” murals depict nine previously incarcerated people. To our right, under the words, “Once Stigmatized,” men and women are painted in plain prison garb. To our left, under the words, “Always Resilient,” the same people—returning citizens in colorful clothing—appear transformed.

“It asks the observer to question their own perspective on how people look,” said Smith. “While that can be a topic that’s deep, it allows for you to have a very visual and not antagonistic experience. Seen through art, what does it mean to you?”

And that’s been a primary tenet of Mural Arts Philadelphia since its 1984 founding—to use the power of art to inspire change in people and places.

“When a person is moved from the inside out, it’s more transformative,” Smith said.

Power in the Paint

Philly’s Mural Arts movement was birthed out of anti-graffiti efforts, “transferring the energies and talents of artists who were tagging, into public participatory artwork,” Smith said. Jane Golden is the organization’s first and only executive director—a position she continues to hold today, as the nonprofit, partially supported by the city, creates between 100 and 150 murals annually.

“There are people whose lives have changed as a result of the artwork,” Smith said.

And he’s not just talking about you and me, visitors and residents. He’s talking about the artists and apprentices, many of whom express their life situations—maintaining sobriety, overcoming homelessness, being marginalized—through brushstrokes.

Taking the time to understand the complexities, issues and people behind the paint on the surface of each wall reveals deeper context.

Murals Are a Draw

Guided weekend mural tours along nine routes, on foot and via trolley, tell the stories behind murals in Center City, historic Germantown, South and West Philly. A self-guided tour puts mural stories in the palm of visitors’ hands, via smartphones.

“It’s empowering for people to choose murals at their own pace and have access,” Smith said.

“Visitors are often surprised at the number of murals we have, and knowing their stories adds to our arts and culture,” said Rachel Ferguson of the city’s tourism organization Visit Philadelphia.

While the depth and breadth of Mural Arts Philadelphia is staggering (more than 50 full-time employees; an annual budget of $13 million; 131 artists employed; 24,000 participants—all in fiscal year 2020), the city’s murals have far-reaching impact well beyond Pennsylvania’s largest city.

“We think cities all over the country can use it as a model, can see the power of the arts,” said Smith, who notes the organization has shared its artistic wisdom with city leaders nationwide.

Why have murals been so successful in Philadelphia?

“Jane Golden is probably one of the most tenacious people I’ve met, as far as holding firm to the belief that art ignites change,” Smith said. “Being the visionary she is, understanding murals’ value as not superficial but impactful.”

In a city known as the birthplace of America, freedom and independence, it makes sense that Philadelphia also birthed America’s artistic mural culture and expression.

“Public art can move the needle in our hearts and minds, and expand our thinking about the world. I tend to think the arts can foster empathy, which is sometimes deficient in our culture,” Smith said. “Jane Golden once said, ‘Art is like oxygen—it should be everywhere and available to everyone.’ And that has stuck with me.”