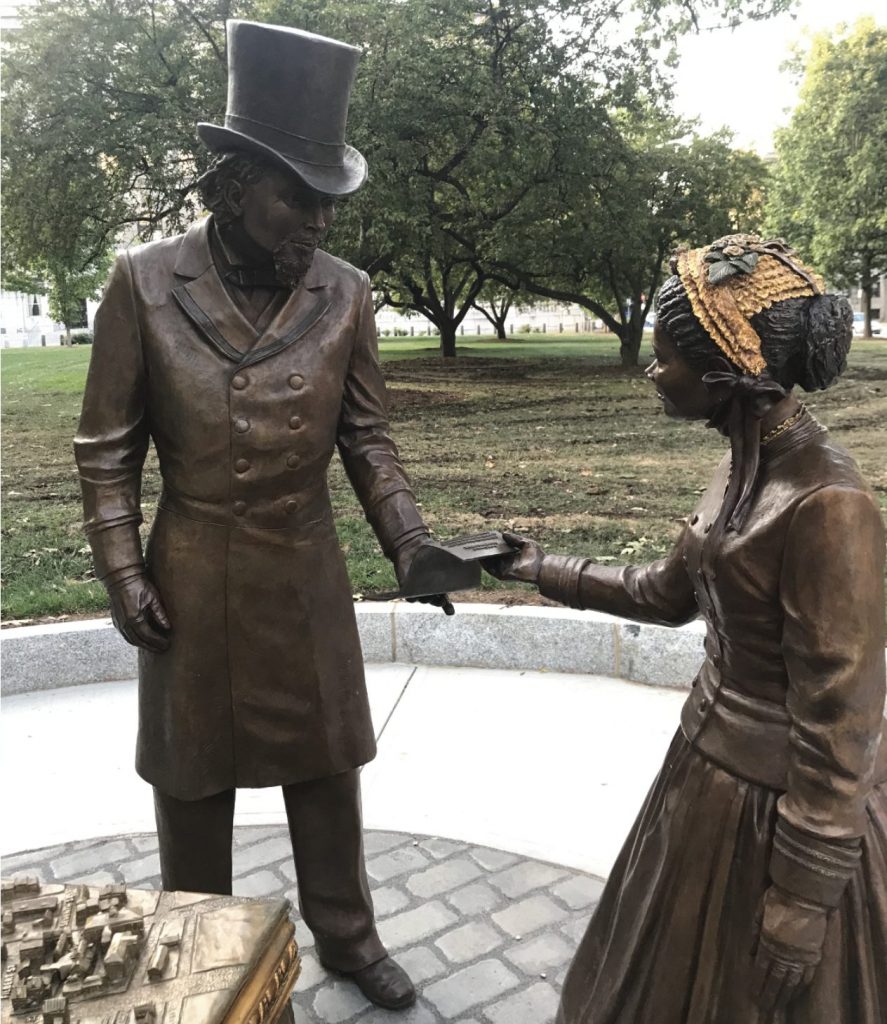 As the late afternoon sun set across Harrisburg on a hot summer day, a ribbon-cutting ceremony took place on the state Capitol grounds for the Commonwealth Monument Project.

What is that? It’s a glinting set of cast sculptures, “A Gathering At The Crossroads: For Such A Time As This,” created as a testament to Harrisburg’s rich African American history and commemorating the 150th and 100th anniversaries of passage of the 15th and 19th amendments to the U.S. Constitution.

It also stands as the pinnacle of a year’s worth of impassioned labor and sweat by its creator, ART Research Enterprises of Lancaster.

ART Research Enterprises is a company specializing in art casting and fabrication, as well as the conservation and restoration of art and architectural objects. Artists Becky Ault and Mike Cunningham founded the company some 40 years ago in Cunningham’s garage before moving to its present location outside of Lancaster.

Today, the company runs between 10 and 30 employees, depending on which projects are underway. Its repertoire includes sculptures, memorials, architectural sculptures and restoration work.

“We do everything from 60-foot sculptures to coffee tables,” Ault said. “We’ve also done work for the Franklin Mint, but mostly, we work for ourselves.”

The company averages 200 to 500 projects each year and has shipped castings around the world—to clients in Germany, England, France, Puerto Rico and many other locations.

The Commonwealth Monument, set at 4th and Walnut streets in Harrisburg, was forged in bronze and sculpted as five elements, Ault said. The project’s initial casting was its 4½-foot base, the “Orator’s Pedestal,” featuring 100 names of families from the city’s Old 8th Ward on its sides, along with homages to businesses and churches that once served as community mainstays.

Topping the pedestal is a relief map of the historic neighborhood that was demolished to make way for the Capitol complex through eminent domain.

All figures related to the project have a Harrisburg connection from the late 1800s, as well as connections either to the 15th Amendment, which granted African American men the right to vote, and/or to the 19th amendment, which guaranteed American women the right to vote. The overall work was created as part of the IIPT Harrisburg Peace Promenade.

“The key factors to anything we do is that we try to envision what you feel it should be,” Cunningham said. “My favorite part about doing this sort of work is the creative aspect. It’s a field that’s constantly changing.”

Lenwood Sloan, the project’s executive director, said that a state search committee selected ART Research Enterprises for the project from a field of 20 candidates. Nominees were invited to apply for the project by the PA Department of General Services, which sought recommendations from “various government agencies” that had commissioned the firms for similar projects, Sloan said.

“They came as highly recommended and were highly engaged during their presentation to us,” he said.

Additionally, the search committee was seeking “a woman-owned business” for the project that, in part, acknowledges the passage of women’s right to vote. ART Research Enterprises stands as the only foundry arts partnership in the mid-Atlantic region headed by a woman, Sloan said.

The company also brought plenty of experience to the project. In all, they’ve completed 20 to 30 monuments across the commonwealth, Sloan said, including castings of Pennsylvania state troopers, the Reading Police Memorial and the Cumberland County Memorial.

“We were all just so impressed by ART Research Enterprises and their willingness to collaborate with the community,” Sloan said.