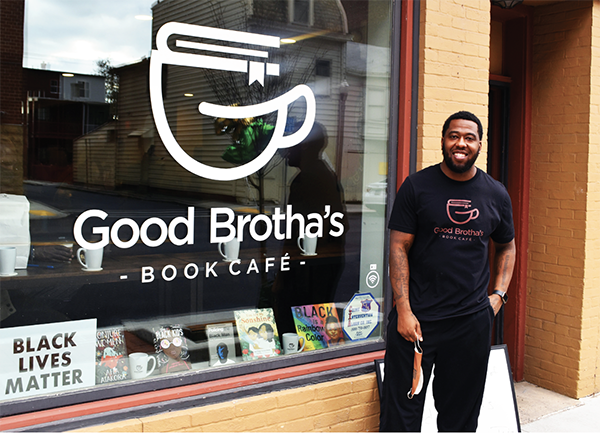 Stefan Hawkins never owned a business before this past summer—now he owns two.

First came House of Vegans, the soul food joint that challenged perceptions of vegan food and gained national attention. We non-vegans realized zero-meat fried chicken is possible and wondered how non-dairy mac and cheese can taste so good.

But, while customers lined up at House of Vegans, owners Stefan Hawkins and Laquana Barber had another plan in the works. Why operate just one business on the 1400-block of N. 3rd Street?

Hawkins and Barber opened Good Brotha’s Book Café just over six months after opening their first restaurant across the street.

“After I saw the success of [House of Vegans] and how the community got behind us, I was like ‘hey, I can get into this a little more,'” Hawkins said.

Hawkins wants to do more than just serve a good cup of coffee—he wants to fill a gap he sees in the city. Good Brotha’s will promote African American literature and art.

Shelves with books for sale line the walls of the café displaying the work of Ta-Nehisi Coates, Ibram X. Kendi, Toni Morrison and other Black authors.

“Representation means a lot to the Black community,” Hawkins said. “Our community needs somewhere to go, something to call our own.”

At any good coffee shop, it’s all about the vibe. With some neo-soul playing in the background, Hawkins hopes the café will be a place for people to hang out, enjoy a cup and read a book.

But a vibe must go hand-in-hand with a great mug of joe. As if starting the café weren’t enough, Hawkins began his own coffee brand, Fifth Acres Coffee Company, to serve at Good Brotha’s.

The name recognizes the areas of the city where he grew up—N. 5th Street and Hall Manor in South Harrisburg, sometimes referred to as South Acres.

Hawkins works with a roaster to produce the coffee, which is sourced from African countries. He eventually hopes to learn how to roast it himself.

“I’m trying to bring something new and energetic to the community,” he said.

Behind the counter, steaming milk and brewing coffee is barista Zinnia Moore. She previously worked for a shop that served Starbucks Coffee, but is excited to now work at Good Brotha’s with its unique atmosphere.

“The morning coffee can change your whole day,” Moore said. “I can change someone’s day. I get to interact with customers, and I love meeting different people.”

She’s down for experimenting with new coffee and tea combinations and has a few new creations up her sleeve right now. Become a regular, and Moore might just have your order ready when you walk in.

Opening House of Vegans this past summer was Hawkins’ first business venture. In the past months, he has grown in confidence as an entrepreneur and learned a lot about owning a restaurant.

“I’ve learned that customer service is paramount to make a good business thrive,” he said. “We put customers first. I wouldn’t have been able to open two locations without them.”

Bryan “Prolifik” Hickman has been a big supporter of his friend Hawkins and his businesses from the beginning.

“When he started House of Vegans, the first thing I wanted to do is support him,” he said.

Two original pieces hang in House of Vegans, and now two more decorate Good Brotha’s. The paintings in the café are for sale. Hickman sees the collaboration as a way for the friends to support each other’s businesses.

“With everything going on this year with social injustice, there was more importance of supporting Black-owned businesses,” he said.

“I want this to be a place to relax and chill, but also get inspiration,” he said.

One way he plans to make that happen is through a book club that the café will host. Promoting literacy and education is important to Hawkins.

Even with Good Brotha’s opening, Hawkins is already thinking about more House of Vegans locations and determining his next move.