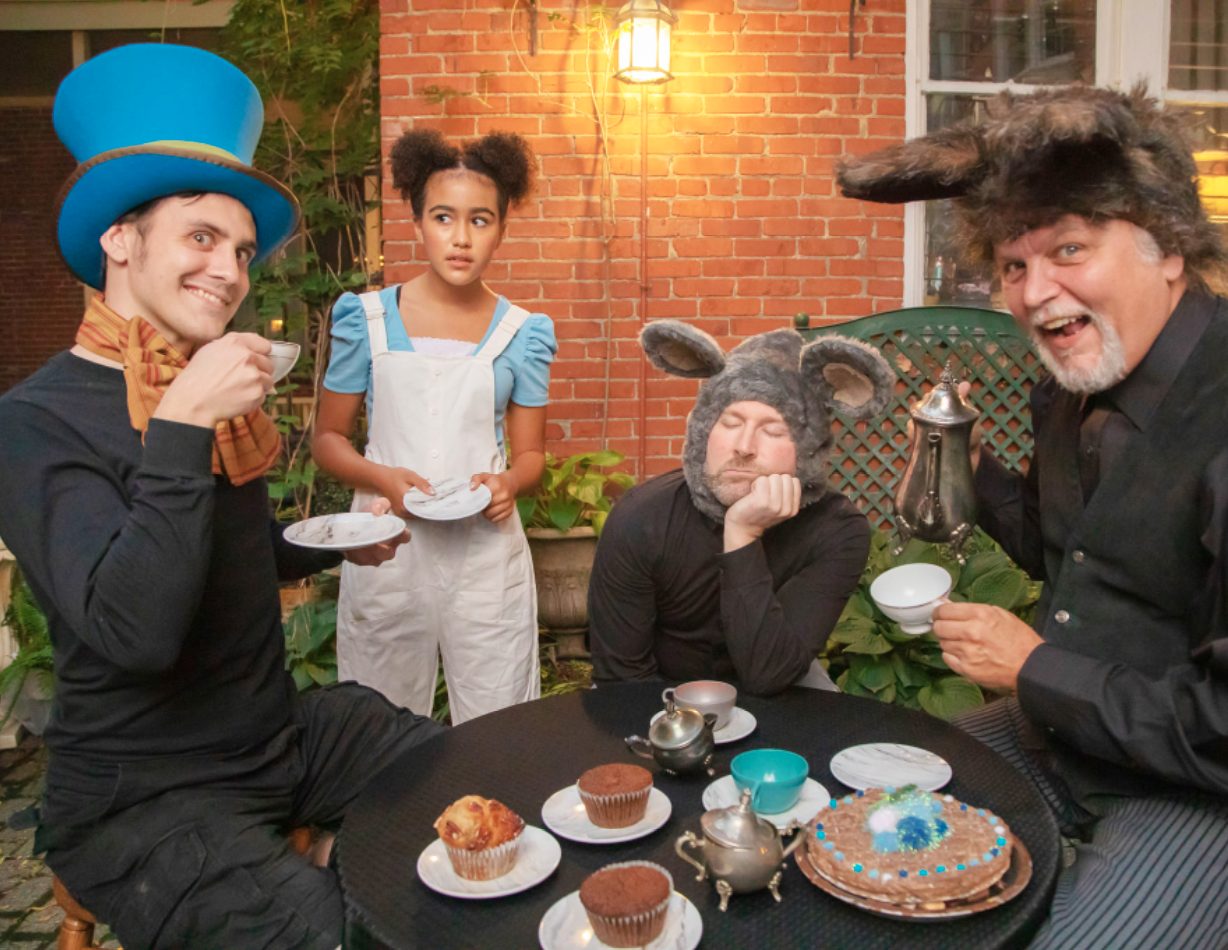 Gamut Theatre’s rendition of Lewis Carroll’s “Alice’s Adventures in Wonderland and Through the Looking Glass” (interpreted by Sean Adams) is a dive into the mystical, exotic, twisted time and space of Victorian England that holds true to the original books.

If you consider the stories as curiouser and curiouser political satire during the author’s lifetime, you will surely find it. Both stories are rife with British humor, a healthy dose of absurdity and psychedelic influence. One wonders whether 7-year-old Alice (Kennedy Commissiong) is dreaming or whether her toys came to life. That is a riddle with no answer. Whether in Wonderland or through her looking glass, both would be true simultaneously. Imagine if the cast of Monty Python stole everything in your kid’s toy box and set them loose at the Renaissance Faire.

Commissiong delivers the audience a sensible, plucky Alice who isn’t afraid to speak up for herself when faced with characters who chastise or try to behead her. Alice struggles to learn the rules and sometimes tries to assimilate. Every attempt to socialize is met with characters who weaponize their wordplay to ensure Alice is kept in her place. Most of them seem to be irrationally angry at odd things and motivated by intense missions that swirl around royalty’s whims.

Throughout her adventures, Alice continues to encounter glib strangers who are strange themselves to any onlooker outside of Wonderland. Like a Fellini film, the costumes (Jen Kilander) alone tell a story cobbled together with hookah pipe smoke. Particularly inspired in the sartorial sense—the Cheshire Cat, the Jabberwocky and Tweedledee and Tweedledum.

Despite the macabre undertones of the overall play, Director Melissa Nicholson said, “This has been a joyful experience for us.”

Part of the joy stems from the eclectic musical pieces.

“Originally, this play did not have music,” Nicholson said. “When we auditioned the actors, we asked them if they had any special skills. We didn’t know we had so many musicians.”

Much like Alice’s heroine’s journey, the song selections don’t confine themselves to any one theme, yet they all huddle together under a large mushroom umbrella. After all, in what other play can you find a ukulele-wielding minstrel bestowing British history lessons (Francesca Amendolia), operatic arias (Benjamin Krumreig), and a keyboardist (Marc Lubbers) playing Jefferson Airplane’s “White Rabbit?” And it somehow all works.

Something else that works is the improv routine smack in the middle of a scene, chosen by the audience at the beginning of the play. So subtly interwoven into the action, it snuck up on me, its only giveaway the little ding of the bell to change the direction of the dialog.

Don’t make the same mistake I did and think the play is over when the first book ends (intermission). Although not as popular as Lewis Carroll’s first story, “Through the Looking Glass,” Act II contains just as many outlandish characters, purposefully clashing costumes, and ridiculously backwards situations. In this land, up is down, and left is purple, but you’d better paint it red.

Come and join the audience. We are all mad here.

“Alice’s Adventures in Wonderland and Through the Looking Glass” runs Nov. 6 to 28 at Gamut Theatre, 15 N. 4th St., Harrisburg. For more information and tickets, visit www.gamuttheatre.org.