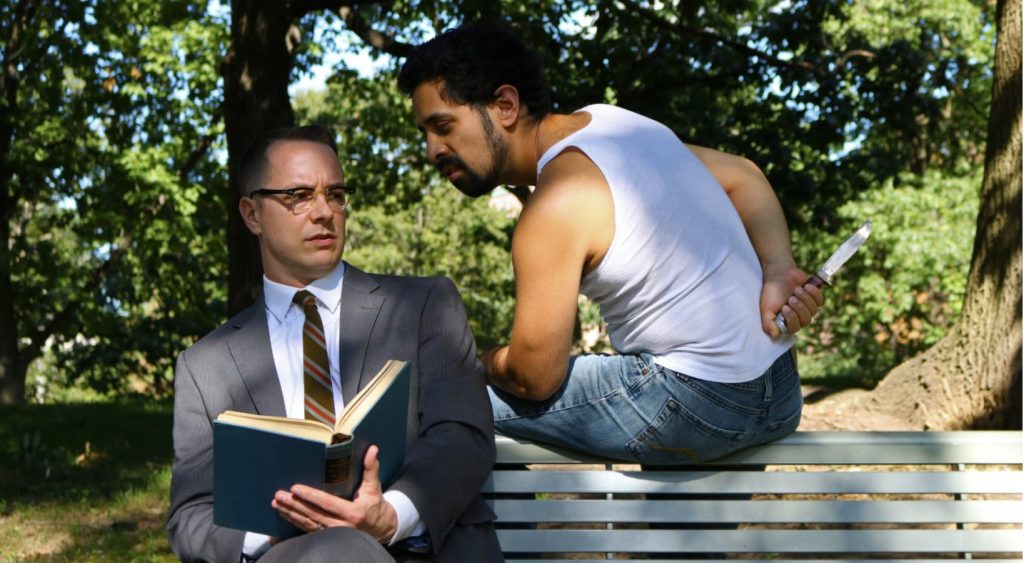 Gamut Theatre made the decision to shut its doors on March 12, as the words “COVID,” “social distancing,” and “pandemic” were just entering the American lexicon.

Exactly six months later, on Sept. 12, Gamut reopened to the public with two comedic one-acts by Anton Chekhov, billed under the title, “Love Hurts!” and featuring the resident Core Company. With this move, Gamut Theatre ventured onto virgin soil: What does live theater look like during a pandemic?

The answer lies in the extensive health and safety protocols that have been formulated and put in place by the company, under the leadership of founders Melissa and Clark Nicholson. Working with the PA Department of Health, the U.S. Centers for Disease Control and the World Health Organization, Gamut Theatre is determined to keep its artists and patrons safe.

Masks are required at all times for all patrons.

“If you have a condition which prevents you from wearing a mask, do not purchase a ticket, as you will be asked to leave,” states Gamut’s website. “This applies to patrons of all ages, including children.”

There will be new, different movement patterns through the theater in order to minimize, if not eradicate, opportunities for traffic jams. While theaters located in “green” counties are permitted to operate at 50% capacity, Gamut has made a decision to operate at 25% capacity, which means that each performance will only have 51 available tickets. Patrons may sit singly, in pairs, or in groups of three—max. If a particular group consists of more than three people, it will be required to separate into groups of no more than three. Visit Gamut’s website for all its health and safety protocols.

The Gamut staff and guest artists recognize just how lucky they are. The size of its downtown Harrisburg theater allows for a responsible reopening, as well as responsible rehearsing. While many artists would love to dive back into the process of producing a show, the Nicholsons had to sit down and suss out how to keep those artists safe. Temperature checks, assigned rehearsal spaces, assigned restrooms and social distancing between the acting cohort and the production staff during rehearsals have all become the new normal.

As mentioned above, the first fall production, “Love Hurts!” was cast with Gamut’s resident Core Company. For their follow-up production, Edward Albee’s “The Zoo Story,” Clark Nicholson worked with another cohort of actors who live together, former Core Company members Jeffrey Luttermoser and David Ramón Zayas.

In a time of rampant disconnect, isolation and uncertainty, Albee’s play examines what kind of effect these circumstances can have on the human condition and to what lengths a person will go to make a genuine connection. The results are startling, but I won’t spoil the play for you. It’s a searing character study that should be seen in person.

“The Zoo Story” is not new territory to Zayas or Luttermoser. A 2004 production of the play marked the beginning of their relationship (the pair married in 2015). Both actors were keen to revisit the show in their adopted hometown of Harrisburg, at the theater they call home. Noting that many of their fellow theater artists are chomping at the bit to get back to work, they feel honored to be a part of bringing live theater back to the area.

Clark Nicholson also has a history with this play, having played one of the two roles, and observes that directing a play like this one, with minimal technical requirements and a two-person cast, allows him a rare opportunity to watch, question and discuss artistic choices made by the actors. So often, he is corralled into choreographing all movements on the stage, making sure sightlines and configurations work for the story they are telling, as well as for their audiences. This time around, instead of having to focus on “you cross here,” he can ask his actors, “Why did you make that choice?”

The act of rehearsing a play with other people in the room scratches a specific itch not only for Zayas, Luttermoser and Nicholson, but also for the production stage manager, Karen Ruch, who seized on this opportunity to work on a show. Ruch was a logical fit for this position, being a member of the Zayas-Luttermoser “pod,” or “bubble,” if you prefer. Having first-hand experience of working in a Ruch-managed show, I can attest that “The Zoo Story” is in exceptionally capable hands.

Attending live theater is a unique type of media consumption. Movies and television, while valuable, simply do not compare. In a performance space, there is a very real exchange of energy between actors and audience. Watching actors tell a story that forces an audience member to question and/or examine their own viewpoints can be a powerful experience. When those actors are only several feet away, close enough to see the tears in their eyes, the sweat on their brow, or to hear the tremor in their voice, that experience verges on earthshaking.

“The Zoo Story” runs from Oct. 9 to 25 at Gamut Theatre, 15 N. 4th St., Harrisburg. Performances are Fridays and Saturdays at 7:30 p.m. and Sundays at 2:30 p.m. Peggy’s Pub opens 45 minutes before show time in Gamut Theatre’s Capital BlueCross Lobby. Patrons have the option to pre-order their drink before show time by emailing bar@gamuttheatre.org.

Recognizing that the pandemic has affected people in different ways financially, Gamut allows patrons to “Pick Your Own Price.” Choose a ticket price that is most comfortable for your budget: $30 (suggested) or discounted levels of $20 or $10 each. Seating is available in singles, doubles or triples. All tickets must be reserved in advance. No tickets will be sold at the door.