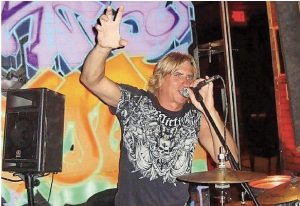 Music has a way of getting into your blood, coursing deep into the heart and then seeping into your soul. For musicians, the experience is even more intense.

Steve Swisher doesn’t have longevity as much as he does a rock-and-roll affliction.

At age 59, he’s still doing things usually associated with musicians half his age. Playing, drumming and performing can serve as their own fountains of youth.

Swisher has long been popular on the vibrant Harrisburg music scene, playing area clubs, bars and restaurants. But he’s also outgoing, genuine, talented and in tune with his audience.

Currently, Swisher is the drumming front man of the Swisher Sweets, a three-piece band that also features lead guitarist Joey Dalto and bass guitarist Phil Cannizaro. The Swisher Sweets are performing regulars at such Harrisburg-area hot spots as Flinchy’s, Dockside Willie’s and the Vineyard at Hershey.

In fact, this month, on Aug. 28 at the vineyard, the band will open for national recording artists, the Gin Blossoms.

From time to time, Swisher also provides percussion for live performances by the ultra-talented Shea Quinn.

“I do it for the love of music and the love of playing music,” said Swisher. “But right underneath that is the crowd and the support you get. When you’re up there, it’s just such a great feeling because you’re doing what you love to do.”

Before the Swisher Sweets came into being, Swisher and Quinn founded the Luv Gods in the late 1990s. Swisher was a big part of that band for 15 years, before moving on in 2016.

Over the last 40-some years, Swisher has contributed to no fewer than 20 local bands and musical groups.

“The (musical) talent in the Harrisburg area is really incredible,” he said. “There are a lot of great players, and they all know each other and support each other. It’s a way for everyone to be successful. But every musician has a different life, a different personality. When you get guys together, it’s got to gel, not only with the music, but also personality-wise.”

Swisher is a product of the 1970s and ‘80s, a time when pop music and rock and roll were really influencing popular culture. His origin as a musician was typical, in that he started playing drums with a garage band as a teenager.

“I was probably 12, my dad would play in a carnival band, and I would go see him,” said Swisher, a graduate of Cedar Crest High School in Lebanon. “I started playing the drums, even though I liked sports. I started to love it, and it was something I pursued. I kind of gave it up for a little while because I loved sports. Then I went back to music, just because I loved it.”

Swisher was an emerging presence on the local music scene when he moved to Harrisburg for a full-time job in the late 1990s. It was at that time that he began to fully understand the financial side of the music industry.

For musicians like Swisher, performing at local bars and restaurants can be a lucrative side hustle, but it is extremely difficult to make a full-time living at it.

“Over the years, I’ve definitely evolved talent-wise, but I also began to understand the business side of it,” he said. “I went out and chased downed the owners of places. I networked myself into places because I knew all we needed was a chance to get that first gig. I knew we were going to do well.”

Now, he said, the owners call him for gigs.

Approaching 60, Swisher cannot imagine a life without music and performing. He often looks ahead, but never at the past.

“I feel lucky and so fortunate to have been doing it that long, just playing with all the great players I’ve come to know,” he said. “I’ve never thought about quitting. I’ll never give it up, because I love the music and I love playing. I can see myself playing in a cocktail lounge when I’m 90 years old.”