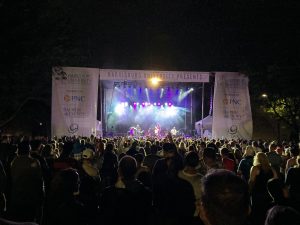 Young the Giant concert at Riverfront Park in 2021

Harrisburg’s music scene is set to heat up in the coming months.

This summer, Harrisburg University Presents is ready to bring back its concert series in full volume, after an altered season last year due to the pandemic.

The university is hosting shows across the city, at venues such as Riverfront Park and XL Live, with some concerts even booked in Hershey.

At Riverfront Park, HU Presents will host Death Cab for Cutie, The Roots, LANY, KALEO, Lord Huron, Nathaniel Rateliff and the Night Sweats, and The National. The university will also sponsor Mallrat at the Englewood in Hershey this fall.

HU Director of Live Entertainment and Media Services Frank Schofield said he is excited for all of the coming shows, especially the ones taking place in the “unique” venue of Riverfront Park.

“I’m just looking forward to being with everyone in the summer,” Schofield said. “The talent we’re bringing in is the best we’ve ever had.”

Schofield said that Lord Huron has sold the most tickets so far, but he expects that each show will be a hit. The series spans a wide range of genres, as well, he said.

“They’re all big and unique in their own way,” he said. “They complement one another and have never been in this market before. That’s what’s so awesome.”

The Englewood will host concerts by artists such as Cordovas, Steve Forbert and The New Renditions, Tractor Jerry and the Mud Bucket, and The Minks, as well as a comedy show by Zane Lamprey.

Harrisburg Midtown Arts Center is also jam-packed with events for the season. They will hold everything from concerts, such as Lilac, Jimmie Vaughan and Jeremy McComb, to drag brunches to comedy shows featuring cast member Creed Bratton from “The Office.”

The Englewood is located at 1219 Research Blvd., Hummelstown. To view their lineup of events, visit their website.

XL Live is located at 801 S. 10th St., Harrisburg. To see a list of shows and purchase tickets, visit their website.